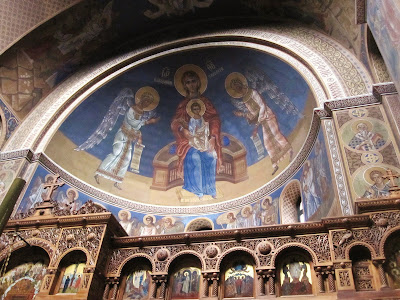 Within the past few decades, a new form of worship has become widely popular among Christians. Where before people would sing hymns accompanied by an organ, then listen to a sermon, in this new worship there are praise bands that use rock band instruments, short, catchy praise songs, sophisticated Powerpoint presentations, and the pastor giving uplifting practical teachings about having a fulfilling life as a Christian. This new kind of worship is so popular that people come to these services by the thousands. They go because the services are fun, exciting, easy to understand, and easy to relate to. Yet this new style of worship is light years away from the more traditional and liturgical Orthodox style of worship.

So begins a lengthly blog post from Orthodoxy and Heterodoxy on the subject of contemporary worship.  It is worth the read.  Even if you do not agree with everything he says, it is a thoughtful post and a good entry into the ever popular worship wars debate.

First we need to ask: Is there a guiding principle for right worship?  St. Stephen, the first martyr, gave a sermon about the history of the Jewish nation.  In this sermon he notes that Old Testament worship was “according to the pattern.”


Our forefathers had the tabernacle of the Testimony with them in the desert.  It had been made as God directed Moses, according to the pattern he had seen. (Acts 7:44 NIV, bolds added).

This phrase comes up again in the book of Hebrews.


They serve at a sanctuary that is a copy and shadow of what is in heaven.  This is why Moses was warned when he was about to build the tabernacle: “See to it that you make everything according to the pattern shown you on the mountain.”  (Hebrews 8:5 NIV, bold added)

The phrase is a reference to Exodus 24:15-18 when Moses went up on Mt. Sinai and spent forty days and forty nights up there.  On Mt. Sinai Moses was in the direct presence of God receiving instructions about how to order the life of the new Jewish nation.  Thus, the guiding principle for Old Testament worship was not creative improvisation nor adapting to contemporary culture but imitation of the heavenly prototype.

The article just keeps getting better.  Especially significant is the last line of the quote above -- imitation of the heavenly prototype.  That is something behind the whole essence of liturgical worship.  It mirrors not the culture of the day (as contemporary worship forms and music do) but attempts to prefigure, glimpse, and direct the worshiper to the heavenly realm which our earthly temple prefigures. If you want some good Lutheran reading on this, get yourself Art Just's great book Heaven on Earth:  The Gifts of Christ in the Divine Service (CPH):

... in worship Christ is summoning us home to be with Him when He invites us to sit and listen to His Word with our ears or our eyes and then come forward and receive His flesh with our mouths. Our eyes are opened to His bodily presence where He offers us the best seat at the table and the finest food.  We have come home to be with God in the Father's house, a foretaste of our final homecoming at the Lamb's banquet in His kingdom that has no end.  Worship is our home, our own unique culture inhabited by Christ Himself, we we know by heart its language and its rhythms for we have immersed ourselves in its life because it is His life...  p. 245

If the Apostle Paul were to walk into an Orthodox liturgy, he would immediately recognize where he was — in a Christian church.  The key give away would be the Eucharist.  This is because the Eucharist was central to Christian worship.  In the days following the outpouring of the Holy Spirit on Pentecost the early Christians met in homes and celebrated “the breaking of bread” (the Eucharist).  Paul received his missionary calling during the celebration of the liturgy (Acts 13:2 NKJV).  He made the celebration of the Eucharist a key part of his message to the church in Corinth (I Corinthians 11:23 ff.).

You just cannot miss the difference -- whether you can explain the theology of it or simply relate the radically different experience.  Good stuff in the ongoing debate about what Sunday morning should look like...
Posted by Pastor Peters at 6:00 AM

I've never really thought about this from the perspective of heaven's worship. Isaiah 6, Revelation 7, it all looks quite reverent. It becomes more and more apparent that this whole contemporary worship thing is really a worship of one's own preferences and taste. (Not to say that can't happen on the traditional side as well--we always have a problem of worshiping the gift rather than the giver, but as I read Isaiah 29, I'm pretty sure that the problem with 'lip-service' worship isn't a problem with the style, but with the hearts that are far from God.)

We have the Eucharist at my CoWo service every week. Paul would recognize it.

I guess that is what makes Lutheran CoWo so special.

The prophets of Baal offered sacrifice on Mt. Carmel. The rest of their CoWo service included yelling (praying), dancing around, and even cutting themselves. Jehovah probably would have recognized the sacrifice.

Elijah, on the contrary, offered the sacrifice doused with water. Said, "Now." God approved that sacrifice by consuming it along with the water.

So can Co Wo be recognizable in some sense, yet still be wrong?

In my day it was said this way: Don't sing your campfire songs at my Mass, and I won't say Mass at your campfires.

This would be the core of any
liturgical worship in any century.