Contemporary but not modern... 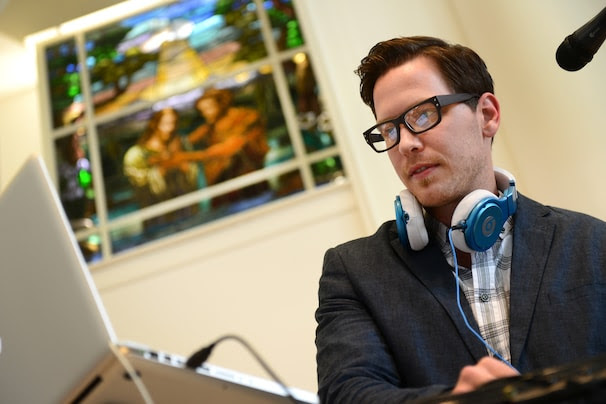 In pursuit of that which is edgy and new, churches have silenced the organ, piano, and other instruments with more history in favor of praise bands whose sound and instrumental complement mirror what younger folks experience in their own musical preference.  The only problem with this is that the praise band itself is a throw back to a previous era.  The usual mix of bass, drums, guitar, keyboard, and song diva seem positively out of date to those whose music is primarily digital -- Ipod, Iphone, or DJ.

And to people younger than 30, the drums and electric guitars of the contemporary rock that dominates much of American Christianity are not only not edgy, “but for them, it’s like singing hymns,” [DJ Hans] Daniels said. “Why does the music you worship to and jam out to have to be completely separate?”

As always, the issue is how far are we willing to go to reflect that which is "in" at the moment?  The praise band was, in the beginning, a sanctified sound that harkened back more to the folk tradition of Peter, Paul, and Mary than rock and roll.  It made baby boomers like me happy for a time.  Perhaps it still appeals more to that cross section of people than to the younger crowd.  None of these are ready to hear the sound of heavy metal in worship, neither are they ready for rap or any other of the more modern musical genre.  Yet, in the quest to be contemporary, why stop with one age or generation at all?


Strangely enough, the most diverse sound in church on Sunday morning is the sound emanating from the Hymnal.  In my own congregation, we enjoy a mix of hymnody that may include plainsong chant and a text from the first three centuries of Christianity along side a Reformation chorale, an English hymn, a Protestant gospel hymn, ethnic music from China, Africa, or other places, as well as hymnody from living hymwwriters and composers.  Even more strange is the fact that the tonal resources of the pipe organ and a creative musician on the bench can give each of these a credible sound that respects the source while making it possible for a diverse assembly of ages, races, cultures, and backgrounds to join in congregational song.

Perhaps most telling is the comment from an 81 year old member:  “I like the music more than I did last year,” she said.  Last year?  Just how often does the sound of the church's song change in that congregation? And does it include an homage to the past or is yesterday relegated to the garbage pile in the pursuit of that which is ever new?

See what happened when we let "Kum by yah" move into the pews?

Best line: Strangely enough, the most diverse sound in church on Sunday morning is the sounds emanating from the Hymnal. - See more at: http://pastoralmeanderings.blogspot.com/2013/09/contemporary-but-not-modern.html#sthash.WNrj1CJ1.dpuf

If we have a problem today in traditional congregations it is that our hymnals have too many protestant hymns in them. Watts, Wesley and Newton are good, for what and what they are. But we need hymns that are patently sacramental and incarnational.

I completely agree, chaplain. In the LCMS congregation I grew up in, we NEVER sang what has come to be known as "Baptist standards." When a member once asked why we couldn't sing "Bleesed Assurance," hus response was that any song that even alluded to the rapture had no place in the church.

Twenty years from now, if current trends continue, will any LCMS congregations be using the hymnal at all?