Upward and outward or downward and inward. . .

As I often quote, "We shape our buildings and then our buildings shape us..."  said by no less than Winston Churchill.  Nowhere is that more true than when it comes to the buildings erected for worship.  We have reinvented the wheel not only in terms of brick and mortar but, in the process, transformed the ordinary shape and expectation of what happens on Sunday morning. 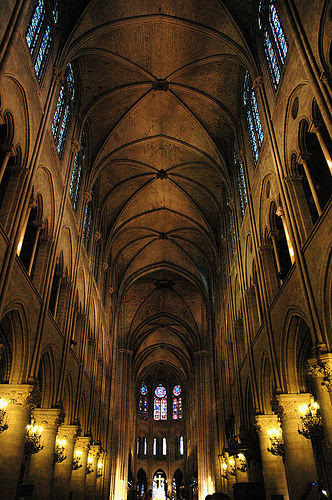 The medieval cruciform shape with its vaulted high ceilings and scale led our attention away from us and upward to the Lord.  It was a shape that purposefully diminished the scale of man relative to the scale of the Lord.  Just as this moved the attention of people upward, it moved them outside themselves and outside the ordinary confines of their lives, their opinions, and their thoughts.  Today's fan shaped and semi circular structures do just the opposite.  They focus our attention downward -- on what is happening before us -- and encourage us to think of ourselves more as spectators than participants, watching what others do more than doing anything ourselves.  In addition, this focus turns us more to our neighbors and the folks sitting around us.  Finally, it focuses us on inward things -- our thoughts, feelings, desires, likes, pleasure, etc... usually framed with a thine veneer of spirituality.

Some years ago when we were planning to build, our architects came to watch the worship, the use of the then current building, and to engage the desires and thoughts of the people.  Our old A-frame space was the source of many complaints (some of them genuine in terms of the slanted walls that created a hazard for those trying to walk down a side aisle and some of them more shaped by feelings and the desire to see more than the backs of people's heads).  What we ended up with is a cross shaped building, where the arms are all of somewhat equal length and width, but the seating is wider than it is deep.  It is not fan shaped but can easily allow you to feel the same perception.  Where once the assembled congregation was gathered in two banks of pews, separated by a center aisle, now the people are divided over six banks of pews and seats with three main aisles in addition to the side aisles on the far sides.  We get to see more than the backs of people's heads but we are more spread out than ever before -- something that works against singing and against a central focus of attention on the center that is Christ in the Word and Sacrament.

Some have complained about how modern architecture ends up not only focusing on the people but ends up with a community celebrating itself more than the means of grace.  I am not sure that I would go quite this far but it can certainly be true that our architectural form facilitates such a self-centered focus.

There is good that has come from the free standing altar.  People see in a way they never saw before the ceremonies and ritual that expresses what it is that we believe, confess, and teach.  When folks watch the consecration, they see the Word attached to the element both with ears that hear Christ's Word and eyes that see the head of the presider bowed toward the bread and cup.  When these are raised for the adoration of the faithful, it affirms in a ceremonial way the affirmation that Christ is present, in the bread and cup, as His Word promises and delivers.  For some Lutherans this is shocking.  When folks tend to think of Holy Communion more as a private moment with Jesus, the attention given to the elements which become what Christ says (His body and blood in and with the bread and wine) can be jarring in the way it challenges this self-centered spirituality focused more upon feelings than upon the concrete elements of the means of grace.  This is but one example.

But there is also a bad thing that has come from the free standing altar and a versus populum orientation.  That is the idea that we have to see what is going on to appreciate things and that the altar is not the central focus of the Liturgy but merely one point on a circle that encloses people, pulpit, font, and altar.  It has helped us begin to see things skewed toward us and less toward God.  There is the unspoken understanding that the leader, the celebrant, is focused on us, rather than upon God. How easy it is for us then to believe that his job, his role, is to please and enrich us, rather than point us to God, to what the Lord is doing among us, and call on us to follow Him. Liturgical leadership often finds it hard not to abdicate to the personal preferences of people, as if the function of worship itself is to please and affirm us where we are, rather than gift us with the grace to go where Christ has led.

When we built our new building in 2000, we moved from an ad orientem posture to versus populum and it has not been without its struggles.  Some folks have been surprised and a few shocked by seeing what happens at the altar, the church usages, ceremonies, and rituals which are thoroughly ancient, catholic, and Lutheran.  It is as if being confronted with this each week has put some in the uncomfortable position of being forced to be more Lutheran than they are comfortable being.  It has also led some to the conclusion that these things are adiaphora and therefore simply expressions of my own personal preference instead of that which is consistent with what we confess as Lutherans in our Concordia.  Yet I think overall this has been positive.  Those who come on Sunday mornings experience an orientation, liturgy, and ceremonial which is Christ directed and means of grace focused.  It is most decidedly NOT in keeping with the evangelical presence all around us and goes well beyond the minimalism that many Lutherans were at ease with prior to the work of liturgical renewal in the 1950s-1970s.

Yet the struggle remains.  The hardest work of the liturgy is to get our attention off ourselves.  The advent of the smart phone has only made this even more difficult.  We are so inwardly focused by our technology that we think it perfectly okay to have a running commentary of what is going on and whether or not we like it (either by speaking to family or neighbor in the pews or texting those not present).  Architecture cannot solve this problem but the modern shapes of churches have certainly come down clearly on the side of worship which is me-focused.  The shape of good architecture and the shape of the liturgy should not be at odds in their work to get us to turn away from ourselves but sometimes that is exactly what happens when we have shaped our buildings in one way and now find them shaping us.
Posted by Pastor Peters at 6:00 AM

The celebrant' s eyes are either focused downward to the altar and the things upon it, the celebrant is genuflecting or bowing, OR the celebrant's eyes are upward to the heaven of heavens. If someone is therefore focused on themselves or the people, are they truly seeing what's going on? Or are they spectating?

Reminds me of The Gleaners who are bent down to the earth, their heads beneath the horizon line. Like sons of Adam working the land hand to mouth in contrast to depictions of Christ who is part of the heavenly realm.

Many years ago, I was a member of an LCA parish in Houston, very close to the Rice Univ campus. From the external shape of the building, it was evident that it had once been a very traditional church layout, with a center aisle leading up to an altar and sanctuary at on end of a long nave. When my family and I came there, they had recently "renovated" the inside, into a truly strange arrangement. They had created a "sanctuary" of sorts, right in the middle of the nave, arranged along the long axis. At one end was a pulpit, in the center was an altar, and at the other end was the baptismal fount. The communion rail encircled all three of these in a long, narrow ellipse. The celebrant wore a rainbow colored chasuble and there were pews on all sides of the "sanctuary." In most places, the pews were only two or three deep from the communion rail.

This had the effect of focusing all attention on the person of the pastor, and I think that was the intent. He was a vain, egotistical sort, but he was an excellent preacher.

Today, I would not touch that parish or that pastor with a 20 foot pole, but I must say, it was interesting.

Quick correction of the Latin. It is ad orientem NOT orientum.

As I have remarked many times, I have been to many Lutheran churches in a lot of small towns all throughout the Midwest. I see these large grandiose churches that belong to the Methodists, the Catholics, the Presbyterians and even the Baptists. Then, I come to the local Lutheran church. It is small with that huge isosceles triangular back and front facade that makes me want to vomit (it's so ugly). The inside is so dark with brick walls and no ornamentation at all save for candles on the altar and off to the side. No crucifixes, no crosses, very bland indeed. It says something, actually it says a lot when the town's Lutheran church is even more iconoclastic than the Presbyterians' church. Pietism (i.e. all about me) is still, unfortunately, alive and well in the LCMS. --Chris