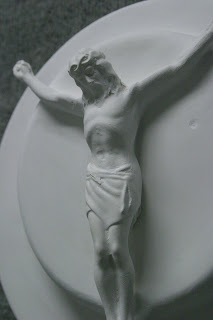 I met a new liturgical artist at the LCMS Convention.  His name is Philip Perschbacher and his work shows great promise.  I was particularly impressed with some of the work commissioned by congregations and photos of some renovation work he directed.

You can visit his website here or visit his blog here.

I publicize young liturgical artists because we need to support them and encourage them.  We also need to employ them.  Lutheran churches are often a visual desert, empty of any images to speak another language to the hearer.  This is not a fitting legacy to the great Lutheran artists and rich liturgical art of past Lutheran churches.  We have forsaken more than the full Lutheran confessional identity; we have also forsaken the Lutheran liturgical identity with buildings bland and empty.  Less is decidedly not more.

Often you encounter Lutheran buildings built in the 1950s-1960s in

which the liturgical furniture looks like it was purchased at the Danish Modern Church Supply Store.  The look is dated and draws undue attention to itself.  In contrast to this, good liturgical art speaks of that which it signifies, added visual depth to the spoken Word and the liturgical acts that take place within its pale.  Lutheran buildings of the 1960s -1970s tend to be bizarrely shaped making the space conform to its ethos instead of supporting the assembly gathered around the Word and Sacraments.  They compete with forms too large and abrupt to make us feel at home in the space which should invite us into the home God has made for us and with us by His grace.  Those Lutheran structures of the 1980s and beyond tend to mirror the style and ambiance of the marketplace, shopping mall, or other generic assembly space.  Too often they are cheap and forgettable spaces that diminish the 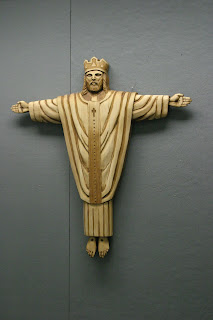 liturgical reality we encounter when Christ comes to His people in the preaching of the Gospel, the splash of living water, and the taste of bread and wine.  Often such structures can be salvageable if a skilled liturgical artist leads us and guides us to what mirrors the faith we gather to hear, feel, and taste through the means of grace.

Philip Perschbacher is a young talent who should be taken seriously and whose gift can assist the liturgical space so that we can reclaim our heritage of art that accompanies and speaks the Word.

Look him up!
Posted by Pastor Peters at 6:00 AM

First link requires Flash to run. No can do on IPad. Schade.