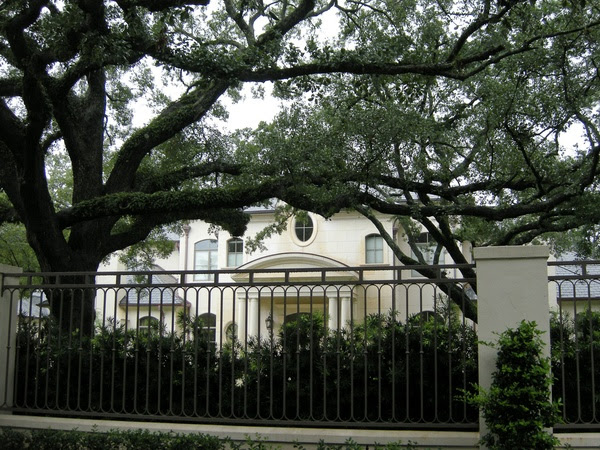 Lakewood Church, Joel Osteen proclaims,"It's God's will for you to live in prosperity instead of poverty." The pastor of the Houston megachurch and wife Victoria certainly practice what they preach. The couple has moved to a $10.5 million mansion in River Oaks, while keeping their former Tanglewood residence, valued at $2.9 million.

They are, however, selling a vacant lot next to their former home. Asking price for the half-acre property at the corner of Doliver and Sherbrooke: $1.1 million. Martha Turner Properties has the listing.
The lot is marked by an ivy-covered wall that adjoins the 5,600-square-foot, four bedroom home. When the land is sold, the property will be divided.  In a sign that the Houston real estate market remains soft at the high end, the Tanglewood lot was first offered for sale at an asking price of $1.4 million last August. The price was dropped  to $1.299 million in December and to $1.1 million last month.

Several months ago, the couple and their children moved to a 17,000-square-foot stone mansion in the Tall Timbers subdivision in River Oaks. The Osteens' new home is situated on 1.86 acres and surrounded by an ornamental fence. The 411: It has six bedrooms, six bathrooms, three elevators and five wood-burning fireplaces, with a one-bedroom guest house and pool house. The Harris County Appraisal District valued it at $10.5 million.

Those who laud Joel Osteen are moved by the hope that God wants them to prosper like he has and that one day they too will enjoy such a lavish lifestyle.  It is the religious counterpart to the old Wall Street movie in which Gordon Gecko smugly proclaims:  The point is ladies and gentlemen that greed, for lack of a better word, is good.

Movin on up is the blueprint of the prosperity gospel and, until you can get it for yourself, it is comforting at least to see the preacher get it... at least that is the presumption.  Sadly, we are all too comfortable with this kind of thing -- we even expect it.  Pope Francis is said to have been concerned that bishops and priests were driving too nice a car and worried about the perception.  It is said for this reason he has yet to move into the papal apartment.  Apparently Francis and Joel don't talk or, if they do, they don't agree.

Osteen has made a mockery of the Gospel, and is not preaching Christianity at all. He is a fraud, and will pay severely for all eternity (think millstones).

He is leading people away from Jesus Christ, and straight to hell. We might think in terms of Dives and Lazarus when we think about Osteen.

Time Magazine had an article a couple of years ago talking about the prosperity gospel when the economy hit the skids. People were falling away from the church because they would ask their pastor, "You said God wanted me to have my nice house, nice cars, RV, and boat. But now I'm loosing them all. What gives?" What gives is 1 Timothy 6:6–10..."But godliness with contentment is great gain. 7 For we brought nothing into the world, and we can take nothing out of it. 8 But if we have food and clothing, we will be content with that. 9 People who want to get rich fall into temptation and a trap and into many foolish and harmful desires that plunge men into ruin and destruction. 10 For the love of money is a root of all kinds of evil. Some people, eager for money, have wandered from the faith and pierced themselves with many griefs. Nuf said.

What would Pope Francis think of this?