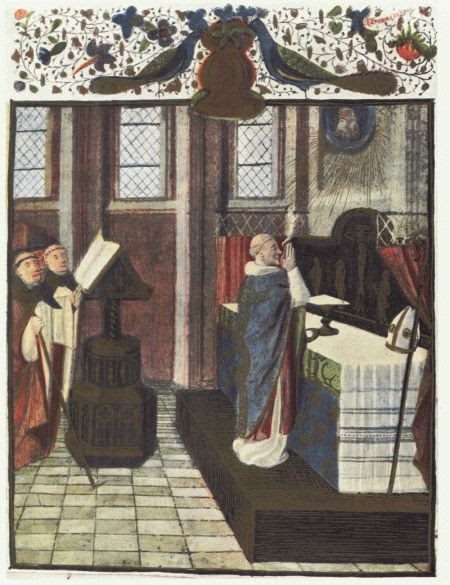 In 1523 Luther issued an evangelical order of the mass in Latin that rejected the offertory and nearly all of the canon of the mass.  In his effort to excise all that 'smacks of sacrifice," Luther shaped the form of Lutheran liturgy for centuries to come.

Just three years earlier Luther had insisted that everything added to the "simple institution by the zeal and devotion of men" be put aside -- including "vestments, ornaments, chants, prayers, organs, candles, and the whole pageantry of outward things..."  (Luther's Works 36, p. 36)

It was characteristic of Luther's hyperbole that, on the surface at least, make Luther sound almost Amish to us.  His point was to emphasize Christ alone -- although his liturgical reforms were draconian to say the least.  Though many have found theological rationale for his liturgical surgery (thinking here Bryan Spinks and his work on Luther's reform the canon), I am somewhat leery of Luther as a liturgiologist.  He was not well prepared for the delicate art of liturgical theology and, while he did a credible job, it was not inconsistent with the medievalism in which he was educated.

My point, however, is that as Lutherans we take him most seriously, we honor him and his words, but we are bound to the much more careful liturgical direction and theology of the confessions where no such hyperbole or animus exists toward church usages, ceremonial, ritual, and even specific liturgical text (here think of the Greek canon of the mass quoted so approvingly).  Indeed, our Confessions see these not as hindrance to be handled carefully or perhaps avoided entirely but as salutary, beneficial, and useful for the sake of the Gospel itself.  More than this, Lutherans insisted that they in no wise abolished the mass or departed from catholic doctrine or practice in any way and challenged their accusers to prove where they had.

Luther's liturgical reforms were pastorally motivated to be sure but they were not necessarily the fruit of great thought or thorough knowledge of the liturgy and its history and practice.  In fact, Luther's reforms of the mass were careful and theological -- more so in practice than in rhetoric.  What went missing was hardly noticeable to the folks in the pew and what was added (chanting the Words of Institution to the Gospel tone) was more understood in Luther's day than in ours (where the Verba are seldom heard chanted by the majority of Lutherans and then such chanting is typically assigned as a Roman holdover and not a reform at all).

In the end, I am sympathetic to Luther's perspective and desire but I am much more comfortable with the approach of the Confessions with respect to the liturgical identity of the Church of the Augsburg Confession.  I would suspect that I am not alone in this.
Posted by Pastor Peters at 6:00 AM

Dear Rev. Peters:
The fundamental topic you touch on is one we skirt around very carefully, or, as the Germans say, “wie die Katze um den heissen Brei” (“like a cat around hot porridge”).
For the quia confessor, in the Confessions Luther is infallible. Beyond that, the writers of the Confessions, in many places, give him generous praise and authority even beyond that. For instance,
“Preface to the Christian Book of Concord
5] To us, indeed, nothing could happen, either more agreeable, or which, we would judge, should be sought for more earnestly and prayerfully from Almighty God, than that both our churches and our schools should have persevered in the pure doctrine of God’s Word and in that longed-for and godly unanimity of mind, and, as was the case while Luther was still alive, …”.
But, as you suggest, maybe we should not accept everything Luther had to say in the area of liturgics. Maybe there are some other areas as well?
Far be it from me to suggest that we start a witch hunt to find error in Luther. I firmly believe that he was indeed God’s instrument to rediscover that Gospel and to return it to the Church at a time when it was nowhere to be found. But we should always be true to the principle he promulgated, that Scripture is the Rule and Norm for true doctrine. Maybe we will also find one or two things Luther wrote in the Confessions that do not quite fit that.
Peace and Joy!
George A. Marquart

Who would have thought that Luther was a pietist?

Your post is important, and it is a discussion that needs to be had among us as LCMS Lutherans.

I don't know enough about Luther, or Reformation history to say if Luther is actually to blame of not for our current state, of low understaning, of Liturgy. But we have what we have and it is a problem.

For openers I think Lutherans need to stop talking about "the liturgy" and talk about "liturgy" which is Christ, the church's one, true liturgist, among his people. (Heb. 8:2)

Liturgy is not something abstract, or external to us, but the very definition of who we are and what we do as Christian. Liturgy and Holy Communion with God through Christ are one and the same thing. Jesus coming to earth, doing the Father's will, speaking the Father's word, and offering himself on the cross for the life of the world is Perfect Liturgy; into which we are inducted by baptism, and celebrate forevermore as we enjoy Holy Communion with our God every 8th Day here on earth, and there in eternity.

What happens on the Lord's (Christ's) Day in the church is an event nonpareil. In it redeemed sinners participate in the things that God has prepared for those who love him. Things that no eye has ever seen, no ear ever heard, nor has ever entered into the heart of man. It is a foretaste of the Feast to come. It is all the promises of God, in Christ, poured into our laps, shaken well and tamped down. Even as I write this I know I have no conception of what we receive here. But we will! "Then we will know, even as we are known!"

When we talk of liturgy we don't mean what fussy rubricians mean, for whom is it "my way or the highway." Nor do we even mean the form per se. For there are many catholic liturgies (even if they are tainted at points). They are all similar in fashion, shape and purpose, but of different wording and elements, and order.

When we talk of Liturgy we talk of Christ crucified and raised again for us. Not simply as a notion in our minds, or as a doctrine. But He who comes to be incarnationally with us, to love us and redeem us.

This would be abundantly clear if we didn't have an institutional prejudice against the Eucharistic Prayer, which makes the latent, patent. There are many EP's that are beautiful, that soar like the eagle, and that could be adapted by Lutherans. (a la your reference the Greek Canon, of which there are actually many.)

I will stop now, but I hope this discussion stays alive.

Lastly, I wasn't aware that Bryan Spinks defends Luther's liturgical surgery, do you by chance have a reference?