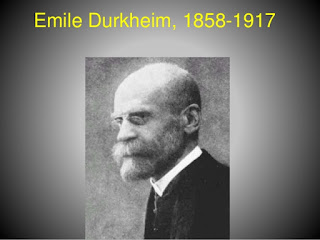 Back at the old Concordia Senior College in the classroom with Prof. Ted Westermann, I first encountered the name and the sociology of Emile Durkheim, a man some refer to as the father of French sociology.  Just in case anybody is listing, I still have a couple of those Durkheim books on the lesser used section of my library.  I cannot toss out a book, even one I have not referred to for 40 years.

Durkheim taught, among many other things, that no society can survive without a common "collective conscience."  Either it will self-destruct from within or it will succumb to the forces outside without the majority of its members holding to and supporting this “collective conscience” and its implicit common morality. As societies become more diverse, this diversity tests the limits of this unity and, as the "common collective conscience" grows continually weaker, the society itself becomes ever more vulnerable to the tears to its fabric from within and the threats outside.

Every society requires a certain commonality in order to function as one nation and people, a set of shared beliefs, ideas and moral attitudes which operate as one of the primary unifying force within that society.  Judaeo Christian communities have long shared a common morality and ideal which made it possible for societies including both groups to function as one.  Of course, national identities and ethnic prejudice can work against this but they pull against the natural common values that both inherently share.  Muslim Christian communities do not share this common morality, values, and sentiments.  In fact, the ordinary ethnic and nationalistic tensions are exacerbated by the tensions created by this lack of a "common collective conscience."  Where religious groups have worked to fully assimilate into their communities, such tensions may be minimized.  Europe is but one example of these tensions made worse by a lack of assimilation and "common collective conscience."

Durkheim was concerned before his time about how societies could maintain their integrity and coherence precisely when things such as shared religious and ethnic background could no longer be assumed.  It was to this end that Durkheim wrote much about the effect of laws, religion, education and similar forces on society and social integration to replace this "common collective conscience."  I do not recall everything from the sociology classes back at CSC, but I do recall how prescient Durkheim was in looking at what were already under stress in his lifetime and have come to full fruit in the diversity and pluralism of a modern world in love with the very things that mitigate against the "common collective conscience" he found essential if a society is to survive and flourish.