Where have all the seminaries gone, long time passing? 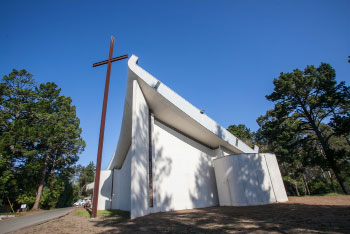 So, Pacific Lutheran Theological Seminary is selling its campus and moving to another location in Berkeley, California, nearer the Graduate Theological Union.  No more dorms or classroom buildings or chapel.  Instead it will comprise a campus consisting of 20 offices, three smart classrooms, a student lounge and a sacristy. A large space will be filled with furniture that can be reconfigured for worship services, gatherings or study.

And then Capital University and Trinity Lutheran Seminary announced their intent to reunite, renewing a promise that began 187 years ago.  For 129 years one institution and then for 58 years neighbors, now they will be one institution again.  Remember that Trinity was itself a union of Hamma and Lutheran Theological Seminary many years ago.

We already recounted the move from Lutheran Southern Seminary to a division of Lenoir-Rhyne College and the move to merge the ELCA seminaries in Philadelphia with Gettysburg and the sale of the Philly campus.  Before that Luther and Northwestern merged.  We already mentioned the strange circumstance of the elimination of daily chapel there.  In Chicago, Lutheran School of Theology works with McCormick and the Association of Chicago Theological Schools so that its identity is only somewhat distinct.

The seminaries of the ELCA are downsizing, merging, and providing seminary education for other church bodies and the numbers of students continues to decline.  Unlike the LCMS which has only had two seminaries -- both with a national constituency -- the ELCA has opted for regional seminaries.  The number and regional location were a bit confused after the merger in 1988 since both ALC and LCA schools became official seminaries of the merged church (Seminex deployed its faculty to a mixture of those schools and did not remain a separate entity).

In comparison to the average ELCA seminary, each seminary of the LCMS looks relatively healthy.  That, of course, does not deal with the LCMS situation of online education for some (SMP) and the fact that either campus could hold the combined enrollments of both.  Some are all for an LCMS realignment but I think it is healthy to have two schools (even if the way we fund them is inherently unhealthy and unsustainable).  Some also complain that both LCMS schools are located in the Midwest (St. Louis and Ft. Wayne) and these folks think that we could benefit from a salt water district location.  I am not so sure that is worth the cost and upheaval and vicarage should intervene to broaden some of that perspective.  Besides, though the culture is different, the faith is not (or should not be) and the job of the seminary is to teach the faith and not the local culture.  In this day and age, geography is less distinctive than the great division between rural and urban.

I have not even mentioned all the Lutheran seminaries who have simply closed or ceased to exist.  Their numbers would fill a paragraph.  That said, as Lutheran seminaries decline in number and the number of Lutheran seminarians also declines, the day is coming when a great number of active clergy in both major Lutheran denominations will hit retirement and the rate of graduates will not meet the need (at least for the short term).  Perhaps this also hits the whole question of what seminary education should look like for the future.  Note that PLTS is giving up a campus for a couple of smart classrooms.  Whether this is a smart move or not, remains to be seen.  I do find it ironic that there are those who plead for streamlining and reducing the content of seminary education because of cost and need -- all at a time when the challenges facing those graduates continue to grow (theologically, in numbers, and in financial viability of some congregations).  I maintain that, in the face of great challenges, we should not be reducing the curriculum or eliminating the time we spend with those seminarians before sending them out into a rapidly changing world.

I recently learned that Wartburg (ELCA) has laid off staff. I ran across a "retired" Greek professor from Wartburg who told me that declining enrollments were forcing staff reductions such as her retirement.