Where have all the organ students gone? 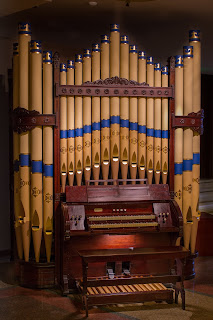 I was reading an interview with Dr. Charles Ore, an acquaintance who has been an organist, composer, teacher, and parish musician for most of his long and storied life.  The piece is in the December issue of The Diapason and I would encourage you to read it there.  That said, one line stuck out at me.  In the late 1960s when Dr. Ore was teaching at Concordia Teachers College, Seward, Nebraska, that school had 180 organ students!!  Let me say that again.  180 organ students!!

Now Concordia University-Nebraska, this little college on the plains has never been a large scale university and has always served the Lutheran Church Missouri Synod with a very significant number of church worker vocation students -- something that has diminished over the years but still leaves this school at or near the top of all the colleges and universities of the LCMS.  Imagine then how many organ students there were in that same time period if you added in the totals from Concordia-St. Paul (remember Paul Manz was there!), Concordia-River Forest (Paul Bunjes, Carl Schalk, and so many others were there!), Concordia-Bronxville, Concordia-Milwaukee, Concordia-Portland, St. Paul-Concordia (MO), St. John's-Winfield, Concordia-Austin, Concordia-Ann Arbor, Concordia-Selma, and Concordia Senior College-Ft. Wayne (Joel Kuznik was there!).  When I entered St. John's in Winfield (near where Dr. Ore also lived for his earliest years) there were so many organ students that practice times were signed up over 24 hours a day, 7 days a week!

And now look at things in the same church body (which now is larger and has more congregations, at least on paper).  Some of those schools no longer exist (St. John's, the Senior College, St. Paul's College.  At least one has consolidated (Ann Arbor is part of Concordia-Wisconsin now in Mequon).  Some no longer even have an organ department or teachers (such as Concordia-Bronxville).  And most others have organ students in such small numbers that they are statistically irrelevant to the student body as a whole.  And then we wonder why it is that Lutherans cannot find organists!

Of course there is no shortage of reasons why when you walk in a Lutheran Church today you may find canned music or praise bands in place of the organ (this from the church that produced such people as Bach (the whole family!), Pachelbel, Buxtehude, Bruhns, Walter, and modern giants like Manz, Ore, Schalk, etc...).  Culture, taste, preference, money, interest, etc....  We have plenty of reasons why not.  What we need to work on are the reasons for the leadership of the organ in a Reformation that was accomplished through song as through theological treatise.

I grew up in a small, rural Lutheran congregation that had an ancient Estey tracker of a dozen or so ranks (nothing brighter than a 4' Octave, half of the stops too soft to be of much use in congregational song, and a bear to play if you used the couplers!).  The instruments still serves that parish but the organist (the same one who was there when I was still a member there) is 80 and is looking for a replacement.  Where will she find one?  The numbers of children grows ever smaller in that community and the numbers who are interested in organ and piano is not increasing either.  Unless this pipe organ is to become a piece of art to look at and remember but not hear, that congregation will have to find some new blood, some young blood, perhaps pay for organ lessons and up the compensation (when I played there 50 years ago it was $2.50 a Sunday).

This is not a story whose final chapter has been written -- unless we choose to let this decline be the final chapter.  I appeal to parents and kids, pastors and church boards, teachers and colleges -- let us raise up a new generation of great Lutheran organists, cantors, kapellmeisters, and parish musicians.  The Reformation is not over and it will continue to be renewed as much by the great Lutheran hymns as well as catechesis.  Let us resolve to rescue the cause of organ and organists from the curious or obscure to the ordinary of every Lutheran congregation.  We will all be better off for it.  If you cannot play, consider donating to a Lutheran university to provide organists (call up my old friend Dr. Joe Herl at Seward, where Dr. Ore spent most of his career).  Through the Church, the song goes on!
Posted by Pastor Peters at 6:00 AM

What is interesting about this is that a few years back I read several articles how there is a huge revival of interesting in studying organ in the U.S. in general. It was reported that several top schools were turning as many as 50% of applicants away for want of space in their programs. These articles, however, did not specifically speak to the situation in the LCMS. I wonder if that trend as continued and the LCMS is an exception to the trend, of if it has died off again? Rev. Jody R. Walter, Webster, WI

How many organ students are currently enrolled at the Concordia schools?

The simple explanation for WHY there are so few organ students these days is that Churches won't pay an organist a living wage ! An organist usually has a Bachelor's degree, if not a Master's or a Doctorate, yet they are expected to work for a church for $100-150 per week (after all they only play for an hour a week) Of course Pastor's only preach an hour a week as well, but somehow they make enough money to actually support themselves. When churches financially appreciate their musicians, there will be musicians to appreciate. BTW, I am NOT an organist or a church musician.

It's hard to believe there was a time when there were 180 organ students at Concordia, Nebraska. I bet practice time was hard to get. Most of those same practice organs still get daily use 50 years after they were first built for the music building (with a few predating the music building).

My husband was one of those students. He also had to schedule the students' practice times as part of his job in the music department.

Thanks for writing about this. The church musicians in the LC-MS are the biggest victims of the "anti-Lutheran-church-music" (hereafter anti-LCM) crowd that controlled our synod for decades.

Pastors might have opposed the anti-LCM movement in their congregations, and many did resist successfully in their own parish, but for those that were not successful in resisting, they still had their job when it was all over (if they did not quit). But the Lutheran church musicians usually did not have a job once the anti-LCM folks took over in a parish.

I could see this happening already in conflicts at Concordia University-Chicago when I was a student there in the late 1970s. I was planning to be an Elementary school teacher in LC-MS, combined with the vocation of church organist, and choir director, but it was evident that the charismatics and young anti-LCM folks were going to carry the day, because 1976 was the "Year of the Evangelical" in the USA and the LC-MS was climbing on board the bandwagon.

One sad case will be sufficient to illustrate. The parish next to mine when I served Oak Park, Illinois was Saint John, Forest Park. In the 1990s it was the largest LC-MS church and school in the area, with one of the finest LC-MS music programs, best organ, best choir, one of the most accomplished organists, etc.

Sometime in the early 2000s, Saint Johns called a new pastor who intended to make the church "grow." One of the first things he did was fire the organist/choir director at Saint Johns. The quality of the Sunday services declined immediately and the choir quit. The congregation went into an uproar, and after it was all over, it was only about a tenth of its previous size. The school had to be rescued by Walther High School in Melrose Park, which still owns and operates it today.

Most LC-MS people in Chicago heard about it. Many LC-MS musicians in Chicago concluded that they were not wanted anymore. They reasoned, "If it could happen at Saint Johns, it will happen to me---soon."

Who wants to spend years upon years of hard piano practice as a youth, later years upon years on the organ, preparing for the hard work of church organist and choir director, when you have a good chance of being treated this way--by pastors, who should be your allies! It is not worth it.

Only when our synod resolutely and consistently affirms the value
of the church musician as a vocation, including pipe organs, traditional choral music, Lutheran hymns and liturgy, music education for church and school, etc., will greater numbers of young people start thinking about making career decisions in that direction again. Those who do make those decisions today are brave souls, who deserve to be commended and PROTECTED.

Yours in Christ, Martin R. Noland

folks like the so-called "pastor" Jody Walter are pushing them away, people like him drive people from God instead of bringing others to God, he is a cancer of the church and God's children