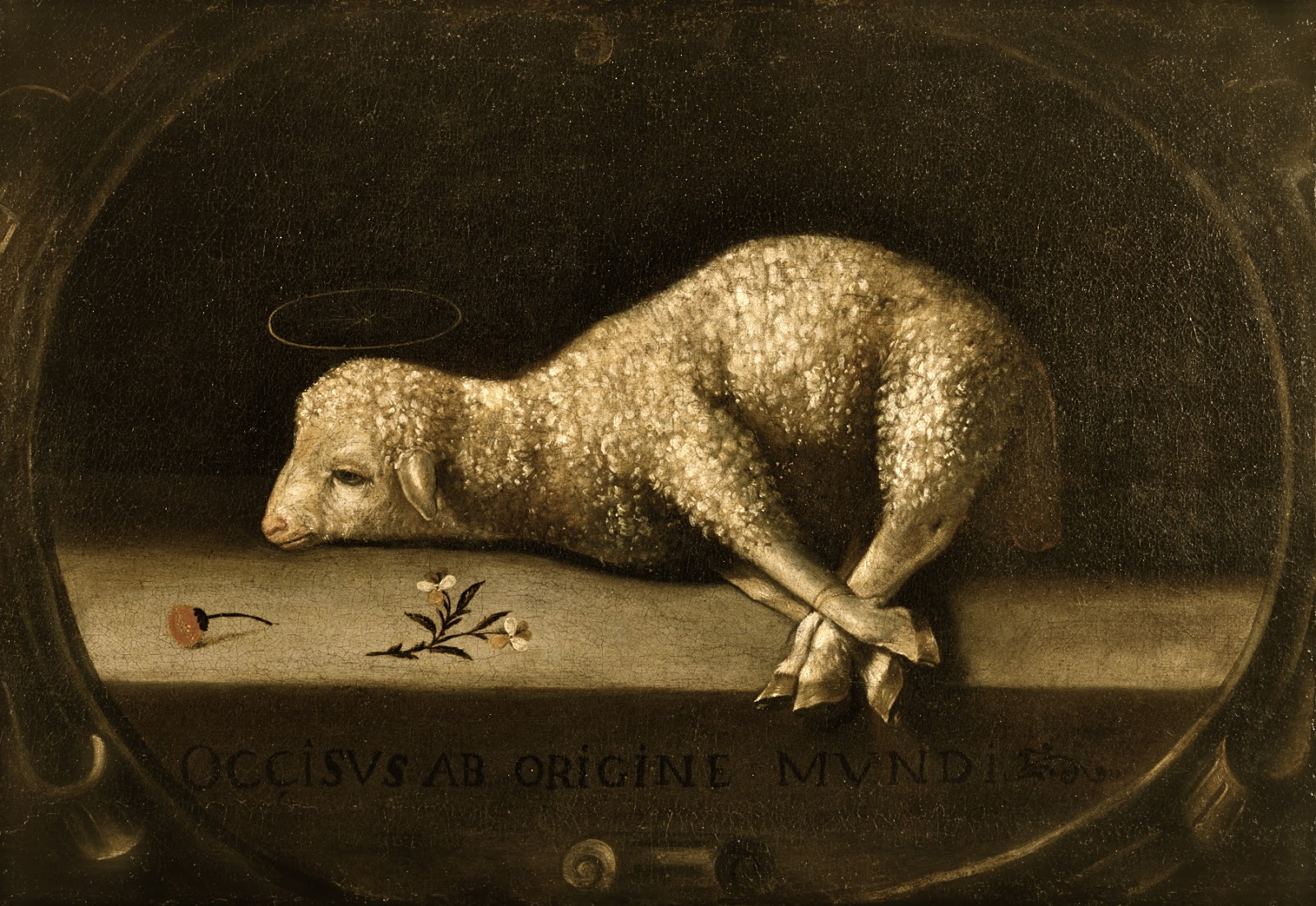 Growing up we watched Lambchops the puppet and thought of lambs as pets or cartoon characters. Lambs were sweet and cuddly.  But that is not how Jews thought of lambs.  For the faithful Jew, the lamb was no pet but the animal of sacrifice whose blood was shed in the Temple for the forgiveness of sins and whose flesh was the food of the Passover.  This was no sweet and cuddly pet but a lamb made ugly with the sins of the people, bled so that this blood might cleanse the worst sinner.  Lambs were born to die.

Jesus came not as a pet to be cuddled and adored but as the perfectly white Lamb of God on whom the sins of the world would hang.  He was absolutely holy, pure, righteous, without spot or blemish but He was not born to stay that way.  He was born to bleed, to suffer, and to die.  When John named Jesus the Lamb of God who takes away the sins of the world nobody listening mistook Jesus for a pet. Like the mom who dresses up the toddler in white, it was not to last.  This was no accident but the very reason for His coming, the purpose for His incarnation, and the destiny that awaited Him in the waters of His baptism and in the suffering of the cross.

Behold the Lamb of God, John cried out for all who would hear.  Jesus is the Lamb of God like no other lambs before Him.  He was holy, righteous, and pure as no son of man had ever been since the fall in the Garden of Eden.  He was born without sin to confess, without disobedience to cause Him guilt, and without the shame of unrighteousness.  No flesh and blood had ever been born like Jesus and none would ever be born like Him again.

He was the Lamb of God but not for the admiration of the adoring or as an example for the guilty to follow or as a coach to encourage the sinners to try harder in their battle against sin.  No, He was the Lamb of God to take upon His own shoulders the burden none of us could carry and to wear that weight all the way to the cross.  He was the Lamb of God not for a world who wanted Him but for a world so corrupted by sin they did not recognize Him and refused to believe they needed His help.
Jesus was not born for us to love but because He loved us when we did not know enough to love Him.  He came not to be the toy of our emotions or the example of what we could do if we tried harder.  He was incarnate not to rescue our hopes and dreams but to save us from the sin that stained every aspect of our lives and the death that waited for every one, sooner or later.  The Gospel is not about a people who need a little help or inspiration to find a happy life.  No, the Gospel is about sin and death and a people so captive to sin's darkness that they don't even get it – much less Him.

It was in the first blood of circumcision that Jesus gave the hint of what awaited Him on Calvary.  It was in the rage of Herod and the death of the Holy Innocents that the stakes of everything were revealed.  It was in the Temple where the 12 year old Jesus waited with the scribes, teachers, and elders while His family headed home that He revealed whose business He was here to do.  It was in the dirty water of the Jordan River that His holiness began to be stained by the sin and dirt of every sinner in all the world.  It was in the words of John that the identity of Jesus was clear – all the lambs whose blood had been shed looked forward to Him whose blood had the power to cleanse the world from sin.

Jesus is the prophet who spoke through the mouths of men so long ago and in the Word made flesh fulfilled their words.  Jesus is the priest who sacrifices and who is Himself the sacrificial Lamb to be offered not for the good but for the bad, not for the noble but for the shameful, not for the righteous but for the sinner.  And Jesus is King of a Kingdom the likes of which this world has never seen.  He is the King who serves His people with His own suffering and death and makes them into a royal priesthood and a kingly people in which He will display His glory.

We treat Jesus as if He were not real but the truth is that none of the lambs who went before Him were real.  Despite all the bleating voices and bleeding bodies, they were not real.  They were mere symbols awaiting the blood that can afford to pay for sin, the blood strong enough to cleanse sinners, and the life holy enough to satisfy the gaze of God.  The dreams of a generation of generations has now been made flesh for us and the whole world.

We come to Church and we treat it all as if it were merely an act – pastors who sing what they could say, who wear costumes nobody else wears, who bow and genuflect and kneel as if it really meant something, who preach about irrelevant things, and who feed you bread you can hardly believe is real bread much less the body of Christ.  It all seems like this is an act and we are all merely playing a part.

How real is all of this against the big realities of our daily lives?  What does all of this have to do with the big realities and great problems of bills that must be paid, marriages that do not live up to our dreams, jobs that do not pay us what we are worth, children who do not do what we tell them, of bodies that wear out until just waking up is filled with aches and pains, or dreams we postpone because we cannot afford them?  We think that these are the real problems we face and these are the troubles of this mortal life we need to be fixed.  What does the Lamb of God offer us for these?

I am here to tell you that the biggest problem in your life is sin and the destiny that awaits you is an eternity of death and that this is why Christ came, why He was born in our flesh and blood, why He was baptized into our sin, why He suffered in our place, why He died our death, and why He rose to give us undeserving sinners the new and everlasting lives none of us deserve.

This Lamb is the most serious and real of thing in life and what happens in Church is the most serious and real of all things - more than anything else in life! Here is sin answered, death killed, past fulfilled, and the new future written.  Jesus did not give you a lamb to comfort you but a Lamb to die for you and save you.  This Lamb is no symbol but real food for you to eat and drink so that you may live in Him forever. There is nothing more real that this Gospel, nothing you do more real than what happens in this place, and no life more real than the one Christ gave you in your baptism and in which you live through death to eternal life!  When we get it, it all changes – today, tomorrow, and forever.  Amen.
Posted by Pastor Peters at 6:00 AM

unnerving, as a good sermon should be...

Thanks for posting sermons here, for those of us with flu, or other real reasons we can't be there.