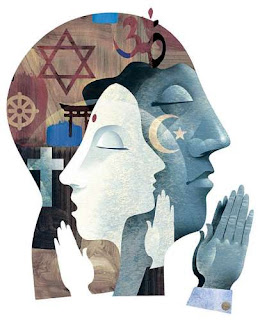 I want to make sure that we are much more creative about beats out in the country so that we understand that anger and disconnectedness that people feel. And I think I use religion as an example because I was raised Catholic in New Orleans. I think that the New York-based and Washington-based too probably, media powerhouses don’t quite get religion. We have a fabulous religion writer, but she’s all alone. We don’t get religion. We don’t get the role of religion in people’s lives. And I think we can do much, much better. And I think there are things that we can be more creative about to understand the country.  From an interview with Dean Baquet, Executive Editor of the New York Times, with Terry Gross on Fresh Air. . .

We don't get religion.  I get that.  I think that this is typical of most media outlets because, as surveys have shown, media personnel tend to be less religious than the average American (at least based upon church attendance).  I wish it were a simple matter of education that could correct the media errors when it comes to religion in America.  The problem is larger than this.  The minds of the media elite and the skeptics finds it unimaginable to believe what reason or science cannot confirm.  For too many of those in the media and among the powerful elite in our country, religion is a mystery not because of what the particular faith may say but because anyone would believe what their eyes cannot see, their minds cannot comprehend, and their experience cannot prove.  It is not what is believed but the idea of belief itself that stands at the heart of the media's inability to get religion.

Of course, this is not surprising.  This is not unique to the media but is exactly the perspective of the heart apart from the working of God.  What is surprising is that Dean Baquet was raised in a catholic home, that the reporters and pundits have grown up in America where religion and religious liberty is woven into the fabric of our land, and where faith is not a side street but the main street of the majority of our people.  What is surprising is that somewhere along the line the people who anchor news, report on the events of the nation and world, and comment on culture and politics have lost touch not only with the nation and its people but with their own youth.  This is the danger of an educational system in which not only is one point of view favored but other points of view are no longer tolerated and this is the danger of a public square when religious voices are no longer allowed.  What has happened here is a generation of political correct speech and speech police have so banished any doubt or question of the accepted values of the educated and the elite that it is impossible for many (most?) to recall or appreciate that the vast majority of Americans DO believe in God and that Christianity in America has been the face of this faith since our nation was born.

The religious have a pretty good idea of what the media and the cultural and political elite believe, think, and value.  They are confronted with this daily in the ordinary media outlets as well as in the entertainment industry.  They daily meet a barrage of propaganda from this political and cultural left.  The problem is that the media and the pundits and most of those in the entertainment industry live lives insulated from religion in general and Christianity to be specific.  In their minds, the only good religion is one that does not inform the values or mind of the adherent and the only good religious people are those who don't adhere to much that the "church" believes, teaches, and confesses.  They are so convinced that religious facts are fiction that they do not hear as the faithful nor do they listen for the faith when they do find themselves within the domains of worship and piety.  That is why they do not get religion.

Having "religion" and claiming to be a Catholic or Protestant does not automatically equate to being a follower of Jesus. For too many, it is like belonging to a group or identifying with a particular religious body, but it has no real meaning in their lives. The true believer will take Jesus seriously and at His word, recognize his or her status as a sinner saved by grace, and realize that life is empty without Christ, who gives us purpose, meaning and direction.