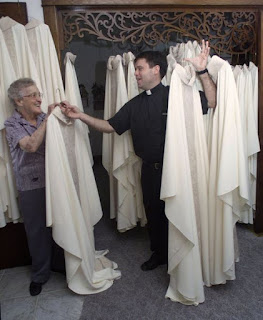 
“About rigidity and worldliness, it was some time ago that an elderly monsignor of the curia came to me, who works, a normal man, a good man, in love with Jesus – and he told me that he had gone to buy a couple of shirts at Euroclero [the clerical clothing store] and saw a young fellow – he thinks he had not more than 25 years, or a young priest or about to become a priest – before the mirror, with a cape, large, wide, velvet, with a silver chain. He then took the Saturno [wide-brimmed clerical headgear], he put it on and looked himself over. A rigid and worldly one. And that priest – he is wise, that monsignor, very wise – was able to overcome the pain, with a line of healthy humor and added: ‘And it is said that the Church does not allow women priests!’. Thus, does the work that the priest does when he becomes a functionary ends in the ridiculous, always.”

Remember my post about little boys who grew up dressing like dad?  Remember the affection and desire of a son who wants nothing more than to grow up and be just like dad?  Now the pope switches it up a notch and suggests that there is something effeminate about a seminarian or young priest trying on vestments at a clergy store.  I can imagine well enough that Lutherans are smiling now and thinking the same thing as the pope.  Pastors who like vestments are not real men.  There is something less than manly about those who try on vestments on the way to becoming pastors.  Cause we all know that the ministry is more than vestments.

Well of course the ministry is more than vestments.  And chanting.  And ceremonies.  And a host of other things.  But it is not less than the outward vesture that says the man is a pastor (priest).  It is not less any of than these things. It is more than them all but it is not less than them.  What would we have a seminarian or pastor aspire to?  Khakis, a polo, skinny jeans, a tee shirt, a plexiglass podium, a flashy Power Point presentation, a scruffy 5 o'clock shadow or man beard, a stocking cap to cover the man bun even when it is 90 degrees outside, a warehouse with a stage, a worship band complete with drop dead gorgeous worship diva, mega screens, Starbucks in the narthex (lobby), a parking lot crew with an extended length golf cart to chauffeur them to the door. . .  You tell me what things say "the office of pastor" or "the pastoral office is the chief means through which God delivers His means of grace to His people" or "this church stuff is serious business????"

It is an easy target to suggest that a seminarian trying on vestments is full of himself, arrogant, vain, or whatever.  What does it say about the one who tells this publican/Pharisee style story?  Is the pope saying "God, I thank you that I am not like him..."  I think it says something.  It says something when a pope who believes his office as the vicar of Christ is the work of the Spirit then intervenes to say "I don't want to wear the traditional vestments; it is not my style."  Or, "I am not going to live in the papal apartment where popes have lived for hundreds of years cause that is not my style."  Or, "I love to schmooze with Lutherans and tell them doctrine is less important than good works."  I will tell you what it says, it says this pope thinks it is his office to question everyone but nobody can question him.

This Lutheran really does not care much for this current pope.  It is because he loves the photo op more than serious theology, appearance more than substance, and pleasing the world more than being faithful in doctrine and there are plenty of Lutherans just like him.  We think it is manly to say "you will never catch me in a clerical collar or wearing fancy vestments or bowing or kneeling or whatever..."  Could it just be that this is not humility at all but the greatest of arrogance and pride?  I am not going to label anyone but I offer this sobering thought.  The ministry needs more men who put themselves under the yoke and less of those who think they can define the yoke to fit what they want, think, feel, or prefer.
Posted by Pastor Peters at 6:00 AM

The vestments add a certain solemnity to worship, and there is nothing wrong with a tradition of dressing respectfully on these occasions. I do not understand how anyone could see vestments as effeminate. Everything should be reasonable and in moderation, I suppose, but this Pope seems to be a bit of an activist and enjoys playing the role of the spoiler.

Such an excellent reflection, Pastor Peters! Thank you.

I hate it when Pastors or Vicars make jokes about wearing a dress. Makes me cringe.

From an Orthodox Christian, thank you!

If the vestments disappear from the RC church, how will we be able to tell them from the Evangelicals???????