The Romance of Revolution. . . 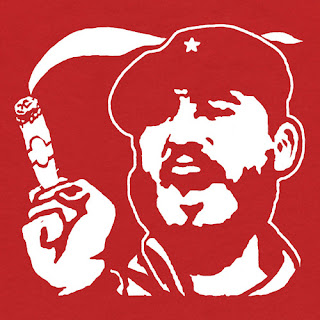 The death of Fidel Castro was certainly greeted in different ways.  Some openly celebrated the death of a brutal dictator.  Others lamented the loss of a beloved leader.  Still others were not sure how to respond to the death of one of the last Cold War figures.  And not a few had a bout of nostalgia for a revolutionary whose image was more palatable than his reality.  Revolution is the stuff of romance, to be sure.  The classic images of a young Fidel with cigar and military green fatigues matched with the image of Che Guevara as a true free spirit.  Unfortunately for many, if not most, Cubans, it was only the spirit that was free.  Life was decidedly constrained by Communism and by a ruling elite that will continue to control Cuba for the foreseeable future.

Why does revolution have so much romance?  I wish I knew.  Every youth has to admit some dalliance with revolution.  As it was once so well put by Edmund Burke (or whoever else is credited with it), If you are not a liberal at 25, you have no heart. If you are not a conservative at 35 you have no brain.  So I am not the first to recognize that revolution has its own cache for youth that most probably wears thin as age and experience set it.  That said, it strikes me that the most revolutionary  stance of all is not liberalism with its romantic images and free spirited ideals.  The most revolutionary perspective is that of tradition -- of truth that does not change, of morality that remains constant as times and people change, and of hope that neither flourishes with good or diminishes with bad circumstance.  It is the Gospel which is the most revolutionary word of all for it is the one word that has the power to transform the hearer forever.  It is the Church which is the most revolutionary force upon the planet for it is the place where God is incarnate in bread and wine and water and the Word to deliver the riches of His grace to the unworthy and undeserving.

Revolution has as part of its romance the casting aside of tradition, the disdain for what has been, and the idealized youthful hope and confidence in the future.  That said, trend and fad are not revolutionary but themselves predictable and routine.  Hemlines go up and then they go down just as lapels grow wider and narrower (or substitute neckties, the legs on your jeans, etc....).  There is not much that is really new.  All that is revolutionary is recycled.  It came and went and returns again (everything except, perhaps, leisure suits).  Where is the revolution in this?  How is it romantic to hitch your hopes and dreams to the new that is not new, to the revolutionary leader who hides behind authoritarian control, to the ideals that stand for little except the idea that the future must be better?

Why is it that Christianity seems so tame when the faith itself is so very revolutionary and radical?  Why do we find ourselves tempted by the illusion of radicalism and entranced by the romance of it all and then come to Church on Sunday and think it is ordinary to hear the voice of God speak in His Word and to feast upon the flesh of Christ and drink His blood?  Why do borrow the business models of the world and treat the faith as if it were a commodity and grace as if it were a product when it is the Spirit who gives faith and a gracious God who bestows mercy generous beyond belief?

You want to be radical?  The most radical posture of all is on the knees before the Lord.  It has taken me far too long to realize this.  Maybe there is no other way for anyone to learn this.  Nevertheless, it is a fool's dream to think that Fidel or Che or anyone else is a radical.  Fidel is dead and he will stand before His Maker as sure as any and all of us will.  Now that is a radical thought!  Not very romantic but revolutionary, to be sure!  But there is one thing even more radical and revolutionary.  Those who live in Christ by baptism and faith do not stand there alone but covered in the Christ who died to redeem us and lives to deliver us to everlasting life.  Get your mind and heart around that radical thought!
Posted by Pastor Peters at 6:00 AM

I often wonder why Mankind has a primeval and visceral attraction to revolution and war. Having been in a shooting war as a young 22 year old Marine in South Vietnam (1967-68), I can only say that whatever glory the uninitiated see in battle quickly succumbs to the madness of mangled men, dying friends, acrid smoke, fear, and self doubt about the need for absolute strangers to kill one another for often indefensible reasons. Wars begin when dialogue stops, when reason is lost to brutality and tribal slaughter continues until one side surrenders. Even today, societies remain enamored of war and revolution, as we Americans see it daily in fictional television shows and real documentaries. But the smells of smoldering flesh, the groans of dying people, and the uselessness and madness of it all can be lost under the banner of nationalism and rationalized as necessary and expedient. I know sometimes it is necessary to defend one's country from invasion or destruction, but when you objectively examine the wars and revolutions recorded in history, a reasonable person could easily conclude that most were unnecessary and reflected a ritualistic bravado and examples of Mankind's sinfulness and chronic madness revealed. By the grace of God, we must pray men of reason can prevail in the years ahead, because the world still remains fond of warfare, and the next major world war may not be far off. Pray for peace.