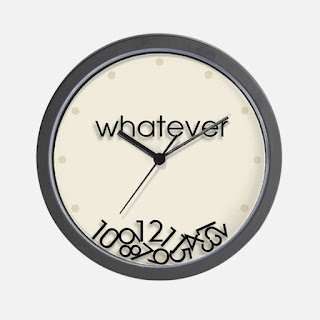 "Whatever works!"  It is the typical perspective of a baby boomer -- more wedded as he is to results rather than how you get them.  Boomers, the category in which I fit by birth, do not like the constraints of rules and regulations nor do they respond will to the constraints of history and tradition.  We, it is said, live in the moment.  That is true to a point.

"Whatever" is the word but it does not mean what it says.  It is not whatever.  Whatever is what you say when you do not get the response you desire.  Boomers like to appear free-wheeling and fanciful but we/they are a group increasingly intolerant of those who violate their ideals of tolerance.  They like relativism but it is a narrowly conceived of relativism that fits within certain predispositions that dare not be violated.

In the mind of the free spirited Boomers, the enemies are rigid and unbending.  They are the modern day version of the Pharisees who wage war over jots and tittles and miss the point of love that is greatest of all.  The Boomers came to age in the years just after the sexual revolution that raised all sorts of questions about marriage and family, love and sex.  They grew up with the prospect of free love and sex without consequences (due to the "pill") and they have accompanied their gray hair with another "pill" (the little blue one) to keep up the formative years of youth.

It became fashionable for the Boomers to decry the opponents of their relative morality and truth as rigid.  It was a word designed to offend.  Who wants to be "rigid?"  The problem is that while the Boomers have presided over a mass deregulation of so many things (morality, truth, economics, etc...) they have assembled a huge machine to regulate opinion (what will or will not be tolerated in the public square).  Political correctness is the enforcement agency of those who claim to be the most tolerant of all.  What cannot be allowed, must be discredited and shamed into silence.  So new words appeared.  Misogynist, homophobe, etc...  These were the bullies who were merely trying to hold onto political power and hid their prejudice behind calls for order and structure.  It was also true of arguments in the sphere of the Church.  Listen to the debate between those for and against the openness of Pope Francis and the eruptions of his bully pulpit that pass for theology.

We woke up and found a world in which Brits exited the EU and Trump ended up President-elect and a Pope's refusal to answer five yes or no questions unleashed voices that insist the Holy Spirit is being questioned.  Maybe rigid is not such a bad word.  In a world of constant change and turmoil, people cry out for the security of order and structure -- in Church and state.  These are not the deplorables but the wounded who find no healing in the modern prescription of relativism.

They want to be able to hold their leaders accountable, to be concerned with self-interest without being cast aside as the selfish, to see the rule of just law honored, to a hermeneutic of continuity in which values remain constant even as situations change and speech is truly free.  They want to be able to go to Church and hear something more than social justice advocacy and to be castigated for being unwelcoming.  They believe the Word of the Lord endures forever and they hope to anchor their lives to what does not change in a world of dizzying changes.  They trust commandments that do not constantly redefine sin and a Gospel which offers real forgiveness, hope, and freedom through a once for all sacrificial death.  They come to dream of a resurrection not to the status quo continued but a glorious flesh and a blessed eternity prepared for them.  They desire baptism which works whether they feel it or not and they come to eat what is His flesh and blood even when their minds and hearts cannot wrap around the Mystery.

Once I felt wounded by the charge of being rigid, now I happy to wear the label.  I am rigid.  I believe in the eternity of truth and the paternal guidance of tradition.  I may be mocked by the term or derided as the fearful or prejudiced or those who care more for maintenance than mission but I see the value of security, the gift of structure, and the promise of a certain rigidity.  The liturgy is not an Etch-a-Sketch in which we draw what we want and the Scriptures are not a book of suggestions we are free to disregard without much harm.  The liturgy belongs to the Incarnate Word it cradles and the Scriptures, too.  It is my job and my joy to anchor the faithful in both.  My people and those who come looking to me are not searching for something to validate their feelings but something to transcend them.  They are worn out by their feelings and by the constant need to define themselves by their preferences and yearn for everlasting and saving truth.  Christ is that Word and truth and He is the focus of all I do (I do not get to invent myself as a pastor but must fit into His category).

Francis seems to want to rebuild Rome into something that more closely resembles the free wheeling image of the Boomers and some of the Lutherans are ready to redesign, reform, and reinvent our own Confessions in the same way.  Jesus is no friend to the Pharisees who hide behind a false structure and man-made rigidity but neither is He a friend to those who believe all truth is good truth and no truth is forever.  As a parent of Millenials, I find that this generation has rejected mine (no surprise) precisely because they have grown up with constant change and ache for truth, security, and structure.  Rigidity may be just what we need  -- if we can just get over the baggage that has come to be associated with the word.
Posted by Pastor Peters at 6:00 AM

The desire to change things and reject previous rules is not in itself wrong. It is really quite normal. Human beings were created by God with minds capable of the best and the worst. Boomers are a manifestation of generational conflict crossing all social, academic, scientific and theological lines. My youthful generation of the nineteen sixties were in conflict with the ideas of my father's generation, which were groomed during the thirties and shaped by economic depression and world wars. There is no answer. Each generation thinks it is wiser than the previous. Coming up behind the boomers is another generation, ignorant in many respects of history, and in many respects rejecting the thinking of the past. Many are secular humanists and see technology and modernity as their path. But I remain an optimist. The wisdom of the world comes to naught when we simply retain our faith in God and ensure we are following Him as our main priority.