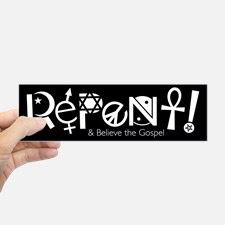 On one hand we have the evangelical side of the Lutheran persona.  Liturgy is adiaphora and ceremony, too.  Nothing is sacred except the Gospel (rendered largely as justification by grace through faith and not works).  Everything else is wide open.  As long as the material principle of justification is not compromised or contradicted, Sunday morning may look like what people want, like what seems to work best within a distinctly American persona, and what fits best into the culture of the specific community.  Contemporary Christian music or even secular music?  If it works.  Media displays that provide relevant and pithy visual commentary?  Sure, if it works.  A generic Christian identity that defers nearly everything to taste and preference?  Yup, if it works.  So whether you are borrowing form Rick Warren or Bill Hybels or Joel Osteen or whoever happens to be the next best guru of growth, it is all good as long as it does not conflict with that material principle.  Creeds, vestments, liturgy, Sacrament, music, even ordo are all negotiable -- subject either to pastoral preference or "style" and congregational want.

On the other hand we have the bronze age Missourians who follow the hymnal (preferably TLH but LSB Divine Service III will do).  They have the Sacrament (just not too often lest it become routine or ordinary but always "special").  They love preaching and the "dry mass" best of all (it does not hurt that you are in and out in about 45 minutes or so).  They like the good old American style hymns (okay, the Gospel songs of old that should be in the Hymnal but are not).  They will tolerate vestments but black is best, topped by a little white -- and it does not hurt if there is no clerical collar underneath!).  They do what Lutherans are supposed to do -- not because they like it (cause they are not sure they do) or because they should (they don't for the life of them know why Lutherans do what they do) but because it is what Lutherans did and do (Grandpa's church).  They think of themselves as orthodox Lutheran in theology but worship is something you should not make rules about even though we all know the best is page 15 (okay, pg. 5) done without too much enthusiasm.  Pastors do it because Lutherans do it this way -- not that is something we enjoy.  We like it done right because we like anything done right (without too much falderal).

And then there is the group both of the above love to hate -- the liturgical crowd!  They are too interested in ceremony and even though they talk all the time about such things as catechesis and orthodoxy we all know they are a bit suspect.  No really orthodox Lutheran likes vestments or chanting or ceremonial or the like. . . especially NOT chanting or incense!  They are always in a clerical collar and they give as much attention to the liturgy as to the sermon (a sure sign that something is screwy).  These are the people who like to use the word "catholic" and to emphasize everything from a weekly Eucharist to private confession.  They insist that it is not about personal preference but they seem to like this stuff too much (perhaps thou dost protest too much??).  They hold their hands different from us and, God forbid, they might genuflect at the incarnation in the creed or the consecration at the altar!  They are always introducing new hymns from 8-10 centuries ago and they act like worship is the most important thing the Church does (more than bringing people to know Jesus as their personal Savior???).  Pastors like this stuff but not too many people in the pews.

We say that all three groups ought to be able to coexist -- to live together as one within the same church body.  After all, we are talking about adiaphora here!!!  The stuff nobody can legislate and which everyone is free to ignore or use as they please (and it pleases the congregation).  Except that this is indeed the problem.  How DO we coexist?  How do you divide doctrine and practice so that any of this is equally legitimate and acceptable on Sunday morning.  Is it possible to coexist when some things so deeply affect us as people and define us?  Perhaps that is indeed the problem.  It is not possible for such divergent perspectives on worship and practice merely to “coexist,” to live and let live, or to try in some way to actually complement one another and fit together in the same church.

These are not surprising causes of conflict but different confessions seeking to define what is Lutheran and what is not.  What is at war here is nothing less than the soul of a Church and all the souls of the people therein. How is it possible to be all things to all people and retain some integrity of doctrine and practice?  Perhaps it is not.  Churchs actually look like what the believes on Sunday morning.  There is no both/and, no in between the liturgy or a semblance of the liturgy and no liturgy at all. Not only the people are this or that; so it the Church.  Catholic as a word does not mean all encompassing but that which has always been.  If Rome cannot figure a way out to have the Latin Mass and Novus Ordo as they same and equal, how is it possible for Lutherans to preserve all that the Augustana claims to preserve and then coexist with those who keep none of it?

Am I saying that it is a lost and forgotten dream to think that Lutherans can be evangelicals, mainline Protestants, and catholics on Sunday morning and live together in happiness and bliss within the same church body?  I don't know but the older I get the harder it is for me to envision the evangelicals giving up their identity or the catholics to insist that it is all style or the bronzies to say its all good and we all mean it and live happily ever after.  Even more, it is harder and harder for me to reconcile this to my own people much less to those who do not even know what a Lutheran is.  I wish I could say coexist but, like the child who wants everything on the menu, we must eventually decide which is preferable even if we also decide which may be tolerated.  And for how long.
Posted by Pastor Peters at 6:00 AM

It's been decades since I have seen a Geneva gown. I mostly see the cowls or chasubles. Maybe I haven't been to the real remote rural congregations. Some of the second groups preferences that you mention I see. That I hear 'Leaning on the Everlasting Arms' or other spirituals means that my congregation is in the South. I do get alarmed when I hear any Decision Theology lyrics from contemporary songs.

When I was Presbyterian I worshipped in a large urban church where the ministers wore the Genevan gown.

The bottom line: We must worship the Lord in spirit and truth, and whether we, as Lutherans, do it perfectly or not, and whether we have uniformity or not, will be continually debated. The Lord is fully aware of our shortcomings, but will our denominational identity and ceremonial preferences really matter when we stand before Him?

The LCMS has already decided on these matters and they will continue indefinitely. Sunday morning services in our churches is like a box of chocolate, you never know what you are going to get. It may be confessional and scriptural. It may not. It has created a real mess of doctrine and practice, which has resulted in a great confusion and disunity among the laity and pastors of our churches. Thanks for highlighting this and for your concern.

Anonymous.....I am really surprised that the Sunday services in your church compares to a "box of chocolates." The LCMS I attend is very much focused on participation in the printed Liturgy, and the sermon and hymns are Christ focused. I think your congregation should have a meeting to discuss this important issue, and if there is no improvement, you need to find another LCMS church...even if you must drive a little further. Like yourself, I have been in at least two LCMS churches which were not focused, but I have always found another LCMS which did have a very solid worship service.

The best resource I know of for finding a liturgical, confessional church. Those pastors whose churches don't conform to one or both seem to wear it like a badge of honor and will not allow their congregation to be listed on this site...at least, as far as I'm aware!

For a simple document walking through Lutheran Worship, check out the "What about..." series on the LCMS Belief and Practice page (https://www.lcms.org/belief-and-practice). What's needed? God's word, His Sacraments, and a teaching that leads His people back to Him. It's our theology that makes us unique-not looking or sounding like Evangelicals or Catholics.