I said we agree and therefore we do agree. . . 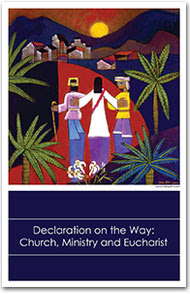 A year ago the Evangelical Lutheran Church in America (ELCA) voted overwhelmingly to approve a declaration of unity with the Roman Catholic Church in an endeavor to “enumerate the many points of agreement between Lutherans and Catholics.”  The “Declaration on the Way” received nearly unanimous approval (931-9) during their church wide assembly in New Orleans. According to an official press release by the ELCA, after the vote the delegates stood and applauded happily.  Among other things, the declaration “seeks to make more visible the unity we share by gathering together agreements reached on issues of church, Eucharist and ministry.”  However, the agreements are not yet complete and so it is called “on the way” because “dialogue has not yet resolved all the church-dividing differences on these topics.”  Roman Catholic Bishop Denis Madden of the Archdiocese of Baltimore, co-chair of the group that mined the half century of theological dialogues, said the agreements clearly pointed to a time when there could be approval of Lutherans and Roman Catholics sharing communion together.


I know, it is old news.  But it is old news that has continued the myth that agreeing to disagree is an agreement and that it is enough of an agreement to share Holy Communion, anyway.  While we are busying ourselves with the 500th Anniversary of the Reformation, at least the ELCA is extending its ecumenical olive branch and trying to single-handedly heal breach and rush our footsteps to the altar.  That there are Roman Catholics who are interested in this creative approach to disagreement is no surprise.  Pope Francis himself has encouraged such a path, at least with his off hand comments.  Yet the issues that divide Rome and Wittenberg will not be resolved by ignoring them nor will any resulting unity be strong enough to do anything more than dilute what it means to be Roman Catholic or Lutheran.

Some believe that the Missouri Synod is not interested in dialogue or in ecumenism.  That is probably true of some within the LCMS but Missouri remains committed to a different understanding of unity -- one in which differences are not ignored or glossed over but faced head on, dealt with in substantive theological conversation in which there is real unity.  This means more than simply using the same vocabulary but actually meaning the same thing by using common terminology.  It is slow and it means figuring out what to do with not only past statements but past condemnations.   It will result not in a weak unity in which people accept differences but decide they are not church dividing but a strong unity in which we stand together and affirm "This we believe, confess, and teach."

To those who are attracted by this pale unity and who ache for the great divisions within Christendom to be repaired, I urge patience.  The divisions happened a long time ago and have been in place across Christianity for centuries.  It will take more than the last 50 years of ecumenical dialog to treat and resolve those divergent theologies and come to common confession.  But do not give up.  The work is even now being done.  It is slow and sometimes we must take a few steps backward before we can take one baby step forward.  But progress will only come as we are the best Lutherans we can be and our ecumenical partners bring their own best to the table.  And the best is definitely better than accepting differences and simply deciding they don't matter all that much anymore.  In fact, what that really means is that doctrine doesn't matter anymore.  If we get to that place, there is no need for ecumenical dialog at all, or even for Church.

As the late, great Dr. A.C Piepkorn stated, there will be no altar and
pulpit fellowship between Roman Catholics and Lutherans until the office
of the Pope is removed. End of story.