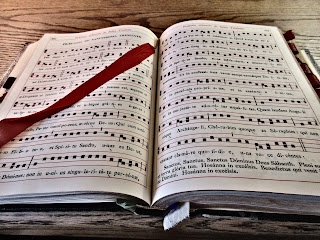 We often are deluded into thinking that the essence of liturgical change is about producing words and notes on a page.  Nothing could be further from the truth.  The true and essential vision of the liturgical movement could not be satisfied simply with rites and rubrics.  The center of it all was and remains the faithful, their lives flowing from and back to the means of grace within the Divine Service.  They are not simply those who are directed by the change but also those who will decide the fruitfulness of that change.

For this reason, it can never simply be about rites and rubrics, about the purity of the form or the care with which the form is utilized.  It has also to be about the catechesis which allows the faithful to live out their faith within the rite and about the fruitfulness of the rite in supporting the faithful and their life centered in the Word and Table of the Lord.  The fruitfulness of it all is judged not by its perfection of form or of practice but must also include the faithful who live within that rite.  So for this reason, the best liturgical development is deliberate, slow, and incremental.  Abrupt, quick, and radical change alienates the people from their liturgical home and distances them from the very place where their faith is born, fed, and nurtured.

Rome has had voices who invested everything in the reform and other voices who invested everything in the undoing of the reform.  So there is a war between those who believe rites are constantly evolving and this change is shaped by and informed by goals and outcomes AND those who believe the rites should be fairly static and shaped by and informed by only the past.  In other words, we have the proverbial missal war between Paul VI and John Paul XXIII.  Both really believe that the triumph of one missal will settle the issue and solve the problem.

Both sides have forgotten that while the ink was still drying on the Vatican Council documents and the liturgical reforms produced in the wake of Vatican II, Father Romano Guardini, a pioneer of the pre-conciliar liturgical reform, wrote in 1964 that if the faithful were not equipped and receptive to liturgical transformation, “reforms of rites and texts will not help much.”   What many have forgotten (on both sides) is what both the Council and Fr. Guardini concluded, the faithful, not the rubrics,  determine the fruitfulness of a liturgy.

Lutherans would do well to listen to this conversation.  We followed Rome in deciding that liturgical change should begin anew and disconnect the past and the present.  We produced a hymnal which had little except a nod to those who went before (LBW and, to a lesser extent, LW).   It was surely not the contradiction Rome experienced between Novus Ordo and the Extraordinary Form (Latin) but it was enough to make it hard to transition to a new book, nonetheless.  We were in love with forms and legislated the change by rubric, forgetting that the faithful vote on the fruitfulness of the change by their attendance and by the piety born of those rites.

Now Lutherans are in worse shape than Rome.  We have institutionalized the changes and the diversity of rites by forcing them to live together on the pages of the book and, to some extent, in the pews also.  It has not been pretty.  We have a plethora or rites and musical settings that have left us more and more divided on Sunday morning (by preference) and more and more diverse as Lutherans to the point where we are no longer all that sure what Lutheran worship looks or sounds like anymore.  We have been judged already by the faithful but this judgment was hindered by the fact that we did not teach the changes well and so our people were not well equipped to weather the change and to judge the fruifulness of that change.

Now some 40 years later we see the consequences of such a radical diversity (fueled even more by the creativity, borrowing, and publishing of rites that are as local as one parish alone).  Let me note that this is not simply about ceremonial but about the shape of our liturgical identity and that life that flows from such identity.  Look at LSB and ELW as books of the church and you see the width and breadth of the diversity that has left worship local, congregational, and pastoral with little to rein in the growing gulf between those who claim to be Lutheran.

What might have happened if the pace of change had been slower and more deliberate, if the past was as represented in the liturgical section of the book as the future, and if diversity were not the primary indicator of goodness?  I cannot tell.  I do not know.  But what I do that we can hardly afford more polarization, more diversity for the sake of diversity, and the local options that threaten to betray us.  Note that I am not really talking about liturgical or ceremonial additions to the Divine Service as much as I am talking about rites that compete and are so different from each other that it is hard to see the family line at all.

The faithful still have a great deal to do with the fruitfulness of the changes we promote.  Nothing has changed there.  How many of our back door losses represent votes by those disenchanted by the liturgical changes of the late 1970s and  early 1980s?  How much of our inability to get along has been fueled by the possibility of local adaptation and change that seems to glorify personal preference over everything else?

We cannot turn the clock back so our age will require that our catechesis pick up where our liturgical changes have failed us.  The only success that endures is the fruitfulness of liturgical change and the folks in the pew have a lot to say about that.   We better do everything we can to give them instruction and preparation so that it does not come down simply to what we like or do not like.
Posted by Pastor Peters at 6:00 AM

So stay static with page 5 and 15 of the TLH? I knew people in my hometown who left my congregation because the service had not changed in 50 years. The time was right for some changes and structures in the liturgy. Christus in excelsis is very hard to sing in a male voice. There were variations in services for the German evangelical masses in the 16th century. I know there's debate on how varied they were, but there were differences.

The entire page 15 service of the TLH is very easy for men's voices if they sing the men's part.

Faithful Lutherans gather each week in the sanctuary to worship Christ
rather than to worship the liturgy. Many parishes print out the
"liturgy" in their Sunday worship folders. The larger the parish the less
chance the person in the pew is actually holding a hymnal.

The faithful Lutheran does not need the smells and bells to worship
Christ. The faithful Lutheran does not need a "chancel prancer" to
worship Christ. All we want is a sermon which is Christ-centered
and proclaims law and gospel All we want is to partake of the Lord's
Supper and receive the Lord's blessings such as His forgiveness.

Is there nothing in between staying with TLH and the radical disconnect of a completely new liturgy? I was not agitating for no change or for radical change but for incremental, deliberate change in the liturgy.

The faithful Lutheran does not need smells and bells or a chancel prancer????? Where did that come from? Reverent liturgy, being consistent with our historic practice, and ceremonies which reinforce the faith are not smells and bells or chancel prancing. The faithful Lutheran reads our Confessions and follows their lead in ceremonies, ritual, and church usages.