Luther and Calvin in America 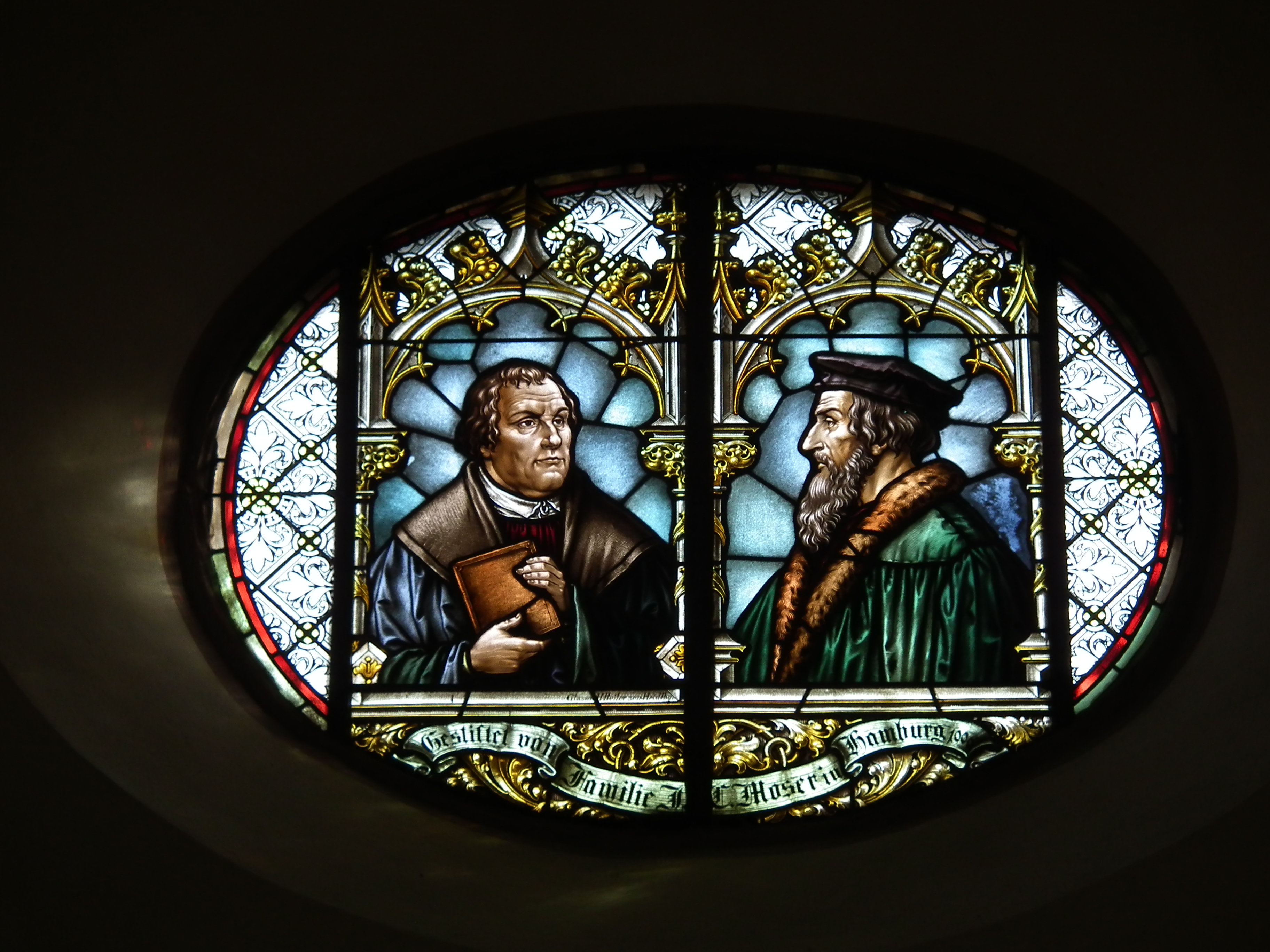 I often wonder why Lutherans felt and perhaps still feel so threatened by the Reformed.  The truth is that Lutherans far outnumber Calvinists - at least in the United States. For example, the Evangelical Lutheran Church in America, is still about 4 times larger than the mainline Presbyterian Church in the U.S.A. – roughly 3.7 million compared to less than 1 million. Compare Missouri Synod Lutherans to the Orthodox Presbyterian Church and they are almost 80 times larger than the OPC – 2.3 million vs 30,000. Even the small Wisconsin Synod is substantially larger than the Presbyterian Church in America, a denomination that seemed poised to transform urban America into Presbyterians thanks to Tim Keller; the WELS has roughly 400,000 members and the PCA has only 300,000.  So even though the Presbyterians may be better known and understood among Americans, they are a shadow of the size of Lutherans and this does not even count those who see themselves as Lutheran but do not belong to a Lutheran congregation!

That said, sometimes we act as if Calvinism was a real threat to us still.  The reality is that Calvinists are not all that Calvinist anymore.  But then I probably should say that there are a number of Lutherans who are not Lutheran anymore, either.  And perhaps that is the problem.  The old polemics do not fit in a world where Lutherans are no longer defined by their confessional documents and Calvinists are not longer defined by their characteristic TULIP doctrinal flower.  In fact, the sad truth is that we don't even speak doctrinally anymore.  Dogma has become secondary to feelings and truth is subject to preference and desire takes precedence over everything.

Some insist that the playing field of Christianity has changed so much that we are more like the situation the first Christians faced.  That might be true except that the people around us think they know Christianity and have rejected it -- a far different landscape than early Christianity in which the Gospel was brand new and people had never heard or seen anything like it.  It was virgin ground then but not now.  Now we face a world which believes it knows Christianity and has judged it false or irrelevant or contrary to reason or experience.  Part of the task today is to replace the false characterizations of the faith with the real deal, speaking the Word clearly to those who are not really listening because they think they have heard it all before.  But it is not simply argument or evidence but the Holy Spirit who works the work that brings faith to the skeptical or fearful heart.  Maybe once we realize this we might just try the Word and let God do what He has promised.  It could not do any worse than our feeble attempts to try and frame modern settings into the same old landscapes of the past or to reduce objections by offering a lite version of Christian with half the truth and less flavor.
Posted by Pastor Peters at 6:00 AM

“...the people around us think they know Christianity and have rejected it....”

Lutherans are vastly outnumbered by the Reformed in America. Presbyterians, like Episcopalians, have traditionally been smaller yet more politically and economically elite than the larger number of Nondenominationals, Baptists, and Methodists. Lutherans fear them because power is attractive. Their theology is more rationalistic and appeals to modern minds more than Lutheranism. Lutheran churches to this day still seem to have the prairie winds blowing through them...

You are right. As far as denominations are concerned. I would like if you would comment about such people as John Piper and others, Calvinists in Baptist and other pulpits who do exercise undue influence. At the same time, there are other movements in the US that are more troublesome like the Pentecostals, who are opening up many places and gaining ground. If it is the Calvinists, with whom is our greatest object for dialogues with church members to warn and contrast with in church? Rev. Michael S. Taylor

If you don't baptize infants you really aren't a Calvinist.

A Catholic friend who reads you regularly sent me the link to this posting. The point about working in an intellectual field that thinks it knows the faith and has rejected it is a good one. This means a difficulty in addressing this field which one encounters very early on in apologetic work is what amounts to being the other, affective prong of the problem: that those who have this assurance are typically, as you observe, controlled in their assessments of what they are told by their feelings, and are, in their wrongness, very delicate and easy to offend. We, however, have been raised under the same influences and are likely to empathize so much with those to whom we have to give the bad news, that we find it perhaps harder to do than ever. God forgive me, but I find it easier to let the damned snowflakes go to hell.

(1) Sticking closely to a confession of what all Christians have believed everywhere and at all times (the Vincentian Canon, or "mere Christianity" or the Creed) and treating "denominational" details as en famille. (This is why I am content to be an editor of Touchstone, which is this kind of vehicle.) We find this tends to be difficult (though not impossible) for those closely trained in, and wholly loyal to, their confessional theologies.

(2) Saying what needs to be said about the wrongness plainly, even bluntly, but in a non-rancorous way. This also requires discipline and practice, for it is hard to avoid the little digs, nasty asides, and unnecessarily tendentious language. Saying this, I must add how much I hate weakening emollients like "lovingly" which one almost invariably finds in prescriptions on how to correct error, especially when plain-speaking has the dual advantage of serving as a bludgeon to the rebellious and a well-defined path marker for those who are not.

I did not mean not to identify myself as the author of the comment above.

"Part of the task today is to replace the false characterizations of the faith with the real deal, speaking the Word clearly to those who are not really listening because they think they have heard it all before."

Most people who have never visited a church already know the same boring and stale main events of the Bible: Adam and Eve, Moses, Noah, Jonah and the whale, Daniel and the Lions, and Jesus as the non-violent "good person" we should emulate, etc. So yes, people think they have heard it all before: "Hey, I am a good person!"

Personally, I like hearing more about the minor prophets, the role of the gospel (and not just law) in the Old testament, and digging more into what Paul wrote.

How can the bible be made to appeal to secular people who think it is a mere storybook or a book that teaches how to be a good person?

It is not Calvinists per-se that Lutherans see as a threat, but the strong influence of Calvinists on other Christian denominations. "Rationalism" in Calvinism? Calvinism leaves no room for mystery. Neither do Evangelical leaders in the NAR (New Apostolic Reformation) movement.

I agree with Michael Taylor in his comment upstream. The Gospel Coalition and other Evangelicals have no problem promoting Calvinist thinkers when convenient, but the study and support of Lutheran theologians is off-limits. For example, Albert Moehler could be considered a Calvinist Southern Baptist. Non-denominational pastors could also feel free to embrace Calvinist theology without fear of retribution from their laymen.

I am glad you wrote about Tim Keller, known as the "conservative" Presbyterian and PCA leader in the USA. Keller is quietly endorsing the Gay Christian movement:

Calvin left a lot of room for mystery. Perhaps he was not a Calvinist.

One of the reasons Calvinists seem to have influence that far outweighs their numbers is that they are very active i apologetics and publishing. Personally, I wish there would be more outreach through apologetics from Lutheran theologians. I think that when you really engage in critical exegesis of the scriptures, Lutheran doctrine makes the most sense for explaining the Christian faith. The trick is doing it in a way such that Lutheran theologians are not constantly taking down one another. Seeing some of the other Lutheran blog sites makes me think this might be impossible within our circle, but if we could do it, it would have tremendous influence. It also seems that CPH has a limited distribution. I can only imagine that there are lots of fine books by Lutheran authors that could have tremendous influence especially in the realm of systematics. Just my opinion.

Reformed publishing houses tend to price books at a more inexpensive price point than CPH does.