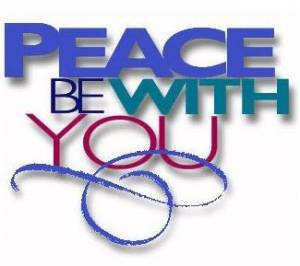 The liturgical movement has been credited with the restoration of the sign of peace to accompany the Pax Domini.  If you want to stir up things, just ask folks Roman or Lutheran about the practice of stretching forth the hand with a smile and greetings which rage from the traditional Peace of the Lord to Howdy.  Some, usually extroverts, love the chance to say Hey to all the folks and others, usually introverts, abhor the idea of a formalized welcome time.  Of course, it is neither a how are ya moment nor is it a greeting time.  The peace remains Christ's to give and ours to mirror in His name and it is not a feeling or a greeting but a peace born of the gift of forgiveness and expressed most profoundly in the peace of the bread and cup that convey this grace.

I learned that the sharing of the peace and the Pax Domini are, in essence, different things.  We do share the peace but it is shared immediately following the absolution.  The pastor absolves according to the customary wording of Lutheran Service Book and after the people's Amen, the pastor prays: May He who began this good work within you bring it to completion on the day of our Lord Jesus Christ.  Again the people respond with the Amen to the prayer.  Then the pastor greets them:  The peace of the Lord be with you.  The people respond, And also with you, before extending this greeting to those around them.  In this way the greeting of peace is tied to the absolution and to that which the Lord has done to forgive our sins (so that we may also forgive one another).  It is before the actual beginning of the Divine Service and so it does not intrude upon the flow of the Pax Domini to the Agnus Dei and the people's preparation for the reception of the Lord's flesh and blood.

In doing this, the peace that comes at the end of the Eucharistic Prayer and Our Father is preserved as the word and work of Christ alone.  The response here is not And also with you but simply Amen -- for that is what the faithful say in response to the gift of the Lord's peace.  It is at once a word not only fitting but all that the faithful can possibly say before the Lord whose gracious favor has forgiven their sins and now proceeds to feed them the blessed food of Christ's body and blood under bread and wine.  In doing it this way, there is no need to try and bring the chaos of voices and movement back to the flow of the liturgy and the time of the people to prepare for their reception of the Holy Sacrament has not been shortened or treated as something casual or unimportant.

In contrast, the greeting after the absolution comes just as the Divine Service will soon begin.  The organist and cantor begin intoning the Introit and it gently and reverently brings the people back together in their places and for the purpose of the Divine Service.  As the Introit is intoned, the pastor and his assistants make their way to the altar for the first time, the pastor kisses the altar and either bows or genuflects and takes his place for the Kyrie, Hymn of Praise, and Collect (the extended entrance rite of the mass).

It is a subtle change to the printed order of LSB and a very gentle addition that befits both the words and the character of what is happening in both places.  I have been doing it this way for nearly 40 years and it has helped both to preserve the greeting for its noble purpose while preventing the free for all that causes many of the pious angst when it happens suddenly after the Our Father and as the people sing their preparatory song of faith, the Agnus Dei.

Repeating this with a few adaptations because some of our newer folks who hated the greeting of peace find this order much more conducive to the liturgy, its solemnity, and the purpose of the greeting. . .
Posted by Pastor Peters at 6:00 AM

I hate it and it!s actually an option in the Mass to ssk
Thr congregation to offer each other the peace. After the Priest says peace be with you and we respond with with your spirit that should be it. When the congregation starts to give each other the sign of peace it disrupts the mass.

I am so glad the Orthodox Church has not adopted this Vatican II innovation. We verbally exchange the peace with the priest and that's good enough for me. And we great one another AFTER the Divine Liturgy ends and often have lots of fellowship opportunities at Coffee Hour.