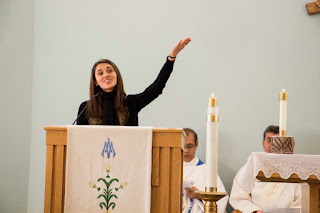 If you attend Novus Ordo masses, you have undoubtedly witnessed the grand sweep of the arm by the cantor (better term is song leader or leaders) which says to you, your turn, it is time to sing!  I know a few Roman Catholics who have just about had it up to you know where with this liturgical gesture.  But we Lutherans are hardly better.  We have our own grand sweep of the arms to let people know it is time to get off their duffs and stand or they can take a load off and sit.  I am not sure there is an equivalent gesture for kneeling but go ahead and prove me wrong.

My point is this.  We do too much announcing and too much gesturing.  It is as if the folks in the pew are either brain dead or cannot read or have never been in the Divine Service before.  I think it is insulting to constantly make housekeeping announcements about what page we are on or if you should stand or sit or kneel or do cartwheels.  I may from time to time succumb to the great temptation to say too much but I wish I had the patience to say too little.  Our people are well educated and well informed.  They can read and most of them have been around our liturgical block a time or two before this Sunday.  We do not need to lead them along on a leash of directive words or gestures.  It is insulting to them and downright rude on the part of the presider.  Yes, from time to time a brief word needs to be said but there is far too much direction going on in a typical parish.

I was once in a service when the people sat for the Old Testament and the presider motioned them to rise saying he had not told them to sit.  Then he motioned them to sit.  Then he motioned them to rise again as if he were some puppeteer and we were all brainless pieces of wood for him to manipulate.  They layman sitting next to me whispered that it was time to leave when a pastor played childish games in the Divine Service.  I did not listen to him and we stayed for more foolishness that was an affront to Christ and His gifts of Word and Table.

A number of pastors have wisely counseled those leading worship to stop with the shenanigans and constant direction.  People are not stupid and those who lead worship should not treat them as such.  We do not need to speak their parts (and if we do we should not bellow them louder than all the combined voices of those present can speak them).  We do not need to direct them when the directions are routine and well mapped out in bulletin and/or hymnal or rehearsed with experience.  Shut up.  Face forward.  Trust that the people are pious (probably far more than those of us who preside), and let them do their thing.  Liturgy is a complement of pastor and people, not a competition.  It is a walk together and not the peons under command of the leaders.  Piety means we all have our parts and we do them faithfully even as we are there to anticipate and because we expect the Lord will also do HIS part in delivering to us His promised grace through the means He has promised to use.

And if the folks do need more gestures or verbal direction, don't treat them badly by making light of it all.  This may not be somber business, the liturgy, but it is solemn.  Let us proceed with reverence and awe (as Hebrews encourages us).  I blame the pastors mostly.  We have trouble shutting our mouths, sometimes.  But whoever you are.  Say the block and do the red.  That is the best advice of rubric and liturgy.
Posted by Pastor Peters at 6:00 AM

Okay class, we’re all going to rise for the reading of the Holy Gospel. Ready?