Who was Paul VI? 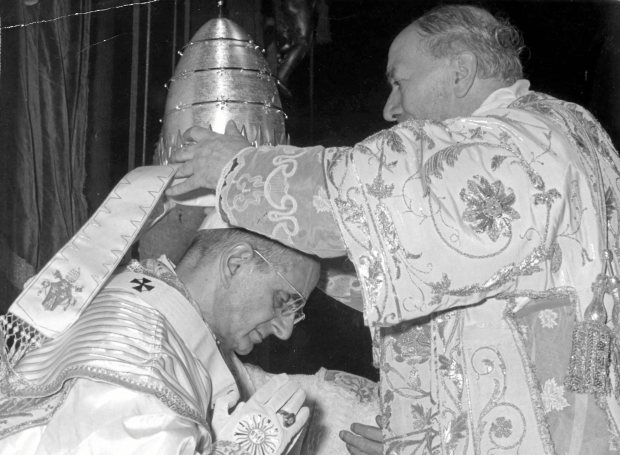 In the wake of Vatican II, it appears that Paul VI was not a pillar of strength but a bowl full of jell-o.  The Council did not mandate the liturgical changes that have become identified with it.  Nearly every one of these decisions were made post-Vatican II, promulgated by a small circle of liturgical pioneers who were given rather free reign by the Pope to implement the practical side of Vatican II's theory.  This included the stark changes of language, of tables set up as altars so priests might face the people, of translations that made trivial the great words of old (think here the collects), of vestments that introduced this rather stark modernity to the eye even as the words did to the ear of the faithful, and of music that seemed to shift at once from the timeless sound of chant and polyphonic ordinary to the folk song of guitar so common in the secular world.  There are stories after stories of Paul VI not even realizing what he had signed into being, the grave disruption between the life of those in the pew prior to the Council and the life of those in the pew in the wake of these substantial changes.  Paul VI here seems a small man, a weak man, who did not know or realize what was being done in his name and therefore by him.

This year, however, we remembered the anniversary of a radically different Pauline legacy.  July 25 was the fiftieth anniversary of Humanae Vitae, the great encyclical on marriage, love, and children that did not fall victim to the press of change but solidly planted the Roman Catholic Church in continuity with its past. What makes it all the more surprising is that this encyclical was issued during the cultural meltdown of the 1960s, indeed the very year a sitting President chose not to run again, pivotal figures were assassinated in the US, and the violence in our land came to a climax at a Democratic National Convention in Chicago.  The whole of the Western world was expecting change and revolution the likes of which they had seen from Paul in the liturgical changes under his imprimatur following Vatican II but Humanae Vitae instantly became the subject of papal betrayal and one of the most vilified works of the papal magisterium in history.  Bishops and theological professors expressed moral outrage and some of them worked publicly to distance themselves from Paul VI as well as work behind the scenes to but the document of its intent.  The guitar song of free love, free sex, and free choice had fallen victim to a pope who had suddenly found his backbone.

Thirty years before this the Anglicans had caved on artificial forms of birth control and most Protestants and Lutherans had left this confused mess to be sorted out without much guidance from the Church and by men and women in the privacy of their own bedrooms.  Perhaps this side of Christianity was too caught up in the spirit of revolution or perhaps it thought there were bigger fish to fry.  In either case, Paul VI provided a pause to the non-stop press for the sovereignty of desire that would produce Roe v Wade and the invention of the right of privacy which trumped all other moral rights and wrongs.  I doubt that John XXIII would have recognized the Roman Church if history had moved as it did but he had not died before the end of Vatican II.  I am not sure that many recognized the Roman Church if they had slept through the decade of the 1960s but Paul VI did provide a rationale for maintaining the teaching of the past even in the wake of such radical change.  In the end, Paul VI proved prescient.  His prophesied in Humanae Vitae about the rise of abortion fever, of the assault on marriage and the family, and of the victimization of women that would be the end of all the freedom and the dismantling of previous social mores for the cause of sexual freedom.  And now look where we are at today. Much as I abhor the idea of liturgical change that is a radical disconnect with the past, I must credit Paul VI for finding his voice on the issue of life and its sacred gift and character from God.  His stumble out of the gate following Vatican II was mitigated by his unwillingness to abandon marriage, children, and life to human desire or technology.  For that we should all be grateful -- even Lutherans about to celebrate again the Reformation.
Posted by Pastor Peters at 6:00 AM

Cardinal Giovanni Montini, later Pope Paul VI, was supposed to be elected INSTEAD of Giuseppe Roncalli, who would take the name John XXIII, in 1960. He was widely recognized as the most qualified and the more intellectual of the two. HOwever, since he was passed over at first and elected as Vatican II was wrapping up things, he felt it was his mission to implement Vatican II, even if he was unsure about how to do it (hence the cluster that is the Novus Ordo). It's easy to fault him but I think he was just really unsure about what to do and got some horrible advice from the holdovers in John XXIII's circle.