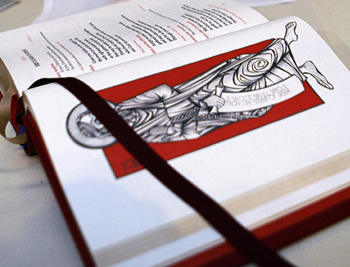 Over at the Get Religion site I read this great line about the deep sorrow one member expressed over the replacement of the Service Book and Hymnal with the Lutheran Book of Worship.  It was no different for LCMSers when the '41 book was replaced with the '82.


What I was hearing was a cry from his heart, as well as his head. Church officials had ruled that his faith — his life —  was out of date and he was hurting.

This is exactly the point I make when I say liturgical change needs to be deliberate, incremental, and careful.  This is what BXVI called the hermeneutic of continuity within the liturgical context.  Both Rome and Wittenberg suffered when this was broken and the change is jarring and abrupt.  When that change was not an evolution but a repudiation of the past, the people heard it rightly as a judgment against that past.  This is not the shape of faithful, pastoral liturgical change.  For LCMSers, this was resolved by the rescuing of that past and its restoration of place along side the change.  It is not the best option since it also creates competing liturgical traditions and a variety of rites (though not nearly as many as some Lutherans) which is not necessarily salutary either.  But it is a better option by far than forgetting our past or ignoring it.

For Rome the dilemma is more difficult.  There is no real reconciliation between Novus Ordo and the Extraordinary Form.  It is possible to try to celebrate the NO more reverently and Ad Orientem but this cannot mask the inherent conflict between the rites.  Curiously, this is not the only conflict between rites in Rome since you also have the Eastern Rite churches and their liturgical tradition that also represents a distinct challenge to the Western Rites.  Perhaps this is minimized by the fact that there are few places where both Eastern and Western traditions stand in direct conflict with one another but it does not resolve the multiple personalities of Rome on a Sunday morning.

For Lutherans the challenge is different.  It is less between competing rites that clearly show a common ordo or identity but the competition between a-liturgical types and very liturgical types.  And that is the landscape of Missouri at this point of time.  We have no competing hymnals and we have no contradictory rites but we have a significant number of our larger churches who live without any liturgical identity on Sunday morning and whose worship life reflects a generic Evangelical style at odds with our confessional identity.  And with this comes the soft underbelly of some Lutherans who have decided either the means of grace do not work or do not work quickly enough and so have substituted human effort, gimmick, and marketing tools to speed up the process of filling the pews, bank accounts, and esteem of the churches.  But that last point is for later consideration.
Posted by Pastor Peters at 6:00 AM

Similar things happened in Anglicanism. When the Episcopal Church USA brought out the BCP 1979, it was a repudiation of the Common Prayer tradition which had continued unbroken up through the BCP 1928. Continuing Anglicans have repudiated the BCP 1979 with its heresies and errors, and retain the use of the BCP 1928. We will not be forced to change.

I read recently that some Lutheran congregations 8n Russia are using the Byzantine Rite. Any thoughts on that?

I have seen a copy, online somewhere, of the (or "a") Lutheran version of the Byzantine Rite. "Highly adapted," one might say, or even "bowdlerized." For example, in the version I saw the anaphora was eliminated entirely, with only the Words of Institution remaining. Good Lutheran practice, perhaps, but hardly "the Byzantine Rite" in any meaningful sense.

Pastor David J. Webber of the Evangelical Lutheran Synod was, IIRC, at one time involved with these "Byzantine Rite Lutherans" in Moldova or southwestern Ukraine. Perhaps this rite can still be found somewhere online, or through Pastor Webber.

No competing rites? Are you kidding? contemporary praise worship is not a competition to the Divine Service III from the TLH? How blind you are.