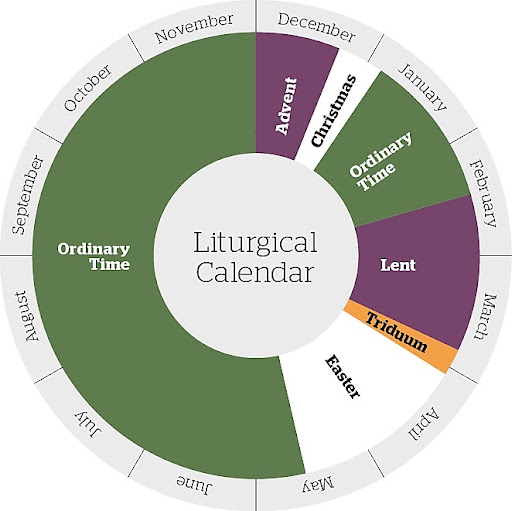 Reading on this from various sources it appears that some of this has been read back into the original documents from Vatican II rather than proceeding from it.  So, it has been reported, Ordinary Time has come to mean something along the way.  The earlier designations of Sundays after the Epiphany and Sundays after Trinity/Pentecost were certainly ancient and presumed a rather neat division between the festival season of the Church Year and its non-festival half.  It appears that at some point there began a move to unite the two into one season with some interruptions.


The Tempus ordinarium (Latin for “ordinary time”) had its source in another Latin designation—the  Tempus per annum— “season throughout the year.”  This is not so ancient, perhaps going back only a decade at the most.  This latter phrase shows up in the 1960 General Rubrics and then in the 1962 Missal when the green seasons after Epiphany and Pentecost are still referred to as the Time after Epiphany and the Time after Pentecost.  The Sundays had their own integrity, were numbered on their own, and served a somewhat different purpose.

By1969 the Missal had eliminated both designations and rethought out the whole Church Year, now conceiving the time as one continuous season in which the Lent and Easter cycles were mere interruptions.  So the counting of Sundays connected them until the continuous season, the invention, began on the Sunday after the Epiphany, skipped the Sundays in Lent and Easter (the Gesimas having been eliminated completely), and picked up the numbering again on the Sunday after Pentecost.

Perhaps the history of the Roman calendar and its sanctoral focus contributed to the decision to simplify the calendar and make these Sundays as ordinary or nondistinctive as possible.  Perhaps it was the pursuit of a golden age of patristic liturgy that encouraged the development of Sundays without adornment or distraction -- the purest state of liturgical time.  By 1969, history was already being rewritten to lay the origin of the concept of ordinary time at Pius X.

In the end what this reveals is that too often we are guided more by the romance of an ideal age instead of admitting that things in the Church are often messy and convoluted.  Things like this allow for invention that violates the more sturdy ideal of continuity in liturgical change.  We need to beware this tendency on the part of liturgical scholars.  Lutherans so often catch a cold every time Rome sneezes.  The naming of Sundays may not be the most critical of issues but the whole process illustrates how easy it is to get off track and jump down rabbit holes instead of the more ordered and orderly development of the rites by which the Church lives.  Caveat emptor.

I've always been rather offended by the term "Ordinary Time." If anything, it seems to me that all our time is "Extraordinary" in the sense that this is the time when God forebears to judge mankind. It is the time when salvation is still offered to me; what could be more extraordinary?

Rome seems to change thing for no reason, at least no public reason, simply to show that it can. It is a human-directed authoritarian system, subject to no law or rule (and most certainly not to Holy Scripture).