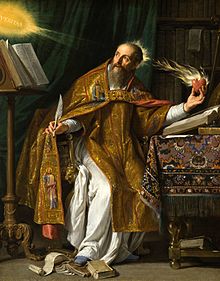 I was reading something in which it was said that man was created with a God sized hole in the heart -- a hole that only God can fill.  It is a cutesy way of saying what Augustine said more eloquently You have made us for yourself, O Lord, and our heart is restless until it rests in you. The problem with this, of course, is that our sinful heart does not acknowledge the hole or know what to do with the longing within.  So, as the song says, the sinful heart looks for love and other things in all the wrong places.  The end result is that, like Augustine, a life of self-indulgence precedes any real awareness or longing for the courts of the Lord's House or the promise of God fulfilled in Christ.

If you recall, the first chapter of Mark’s Gospel includes a line about this.  On the edges of Capernaum, early in the morning, Jesus is nowhere to be seen.  He had healed a small mob at the house of Simon Peter and word had gotten out.  Some wanted Jesus to fix them and their lives and others just wanted to watch.  But where was Jesus? The text says that Jesus had slipped away to a place without distraction and people so that He might pray.  The default leader of the group was frustrated by Jesus' absence and went about finding Jesus. When Jesus was finally located, Peter mutters his exasperation by stating the obvious.  Everyone is looking for you! Mark 1:37 But were they?

Were they looking for a good fit for the God sized hole in their hearts or were they looking for selfish interest to be met or an experience to remember and tell about?  We enjoy the romance that people are hungry for the Gospel and waiting to hear it as if it were a pearl of great price they have just unearthed.  But that is not the case.  It is for this reason that the Law must be preached.  Sinners unconvinced of their sins are not so enamored by a God who forgives and the dying who have already made their peace with death are not necessarily ripe candidates for the promise of the resurrection.  The people are restless but their restlessness is chaotic and aimless until the Holy Spirit points it to Jesus.  This is, in part, why the Law cannot be absent from the witness of the Church to the world and the preaching to the people outside or inside the Church.

Lent is, for most liturgical folks, the time when that focus is more narrowly proclaimed both on Sundays in Lent (but not technically of Lent) and in the mid-week services.  The call to repentance is renewed to the voice of the Church and to the ears of her people in a more deliberate way than perhaps the rest of the year.  We hear in the Gospel for the First Sunday in Lent the story of Jesus' temptation -- basically the temptation to set aside the Lord and put self forward.  It is the temptation we face daily and it is the temptation the world knows as normal.  Only the Holy Spirit can teach us the difference between the norm of the Old Adam and the norm of the new person created in Christ Jesus through His own death and resurrection.

Finally, the God sized hole is filled and the sinner rests in the arms of a merciful God but that does not mean life becomes easy or simple.  Just the opposite.  Our hearts finally know the rest God has appointed and yet our lives are filled with persecution, trial, and even threat of death at the same time.  One most not forget this.  For this reason the Word of the Lord is not a simple turn of a key in a lock but the daily turning out of the captive into the light of His love and the freedom only Christ can give.  We come back to the Church to remember our baptismal identity, to hear anew the voice of absolution, to listen to the Word read and preached, and to eat and drink the body and blood of Christ.  And to be directed by the Word so that we know what the shape of our lives is to be.  God sized holes need giant boulders to fill them and God does not disappoint but it is not the end.  Only the beginning that begins anew each day, each week, each month, and each Lent.