When truth becomes the enemy of love. . . 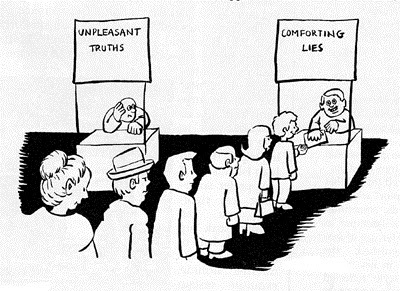 Over the course of time, at least in the culture around us, truth has become a bad word -- even worse than a four letter word.  It is not simply vulgarity but offensive.  At some point in time, some churches accepted and even adopted this idea.  Certainly this is behind those who acknowledge that the Scriptures and Christian history taught one thing with regard to the LGBTQ+ but they have chosen to ignore that truth in favor of the gospel principle of love.  It is also behind those who have adopted the idea that man is the enemy of nature, that babies are bad for the world, that life is neither sacred nor special but merely a choice, and that gender is a fluid concept subject to the whims of the moment.  Truth has become, at least in the minds of our society and liberal Christianity, an enemy of love.  It is, in the end, the choice of emotion and feeling over that which is objective and true.

But there is no love without truth.  While the eccentricities of the social order may interest us, this is not simply about curiosity.  For the positioning of truth against love or even the priority of love over truth or before truth will cripple the Church.  Imagine this, we live at a time when technology has afforded us unbelievable means to promote the truth that saves and yet this resource has been squandered on pornography and the triumph of the individual and his or her own desires.  Imagine this, we live at a time when doors are opening all over the globe for people to hear the Word of God and believe it and the minds of the West are being closed to this Gospel because they reject even the concept of truth.  It is not for lack of resources that find ourselves in a crisis state but our neglect of the truth and the choice of some in Christendom to promote love at the expense of truth.  In too many places the voice of the Church has been replaced by a false voice which says that love and mercy are greater than truth, more important that truth, and that truth must be subordinate to and subject to love.  In the end, truth will be sacrificed for this false notion and in the end the Church will die and its halls will become the catacombs of death where life once lived.

Furthermore, the love that is being promoted is nothing more than mere kindness. While kindness is certainly good and it flows from love, being nice or kind is not the same as being loving.  Kindness does not necessarily include correction or rebuke but love certainly does.  In fact, Scripture is blunt in saying that the Lord disciplines those whom He loves. We live in a culture in which love mean acceptance and tolerance and, increasingly, anything other than approval is judged to be hateful.  Love has become weak and fragile -- so weak and fragile that it cannot muster the voice to disagree and it cannot tolerate such disagreement.

This has also infected the Church where the voice of God no longer calls anyone to repentance out of fear of offending them.  We walk on eggshells in order to avoid giving such offense.  Certain subjects are off limits.  We tailor our truth to fit the hearer and are selective about the doctrines we believe and confess.  What is more important than truth is the welcome we give and we constantly gauge our welcome through endless surveys and responses we hope will help us be nicer, more friendly, kinder, and gentler.  But this is a complete misrepresentation of the truth entrusted to us and a false love that has no power to save or redeem.  We offer mercy to those who do not and have no intention of repentance.  In the end, we have become enemies of Christ and His Church by preaching “A God without wrath [who] brought men without sin into a Kingdom without judgment through the ministrations of a Christ without a Cross.” ( H. Richard Niebuhr, The Kingdom of God in America).

We fret about offending anyone and everyone except God.  We are free to offend God by editing His Word, by remaining silent in the face of sin, by our refusal to call sinners to repentance, and by preaching a Gospel without mention of sin that must be atoned for and death that must be overcome.  You might think that this has made us popular but it has left our churches stale and empty.  Nothing has done more to work against the work of the Gospel than the choice of love over truth.  Love and mercy are wonderful, beautiful, and precious but they are nothing without the Truth that endures forever, the Word of the Lord in flesh who suffered to become man, to live the obedient life we could not, to suffer in our place the punishment of sin, to die the death we should have died to pay its price once for all, and to rise so that this Gospel may be preached in His name across the earth.  Only then can love, mercy, and kindness flourish.  And without this truth in Christ, they are but words without power to do anything at all.

In case you think this is all academic, look at the situation in Finland where a pamphlet against homosexuality resulted in police at the door of the Dean of the Confessional Lutheran Church of Finland.  It is not if but when this shows up nearer to home.

Hmmm what does truth really give?

I lived my whole life since I was 13 being repentant for being attracted to other guys. I am single and celibate because I believe God does not permit sex between men.

All it got me was a district president who acted in such a way as to start rumors in my home congregation that I was a child molester so that I am ashamed to go to church any more.

I will continue to obey God but I no longer give a crap whether I go to heaven or hell or whether God forgives me or not.

It does not matter because truth without kindness or love is simply cold.

No one said truth is empty of compassion or without kindness. Of course you are correct. Truth without love is not truth. But what the post was saying is that love without truth is not love either. What happened to is a betrayal and lacks both truth and love if lies or innuendo are the tools used against you. While such a person is a sinner, that person does not speak for God in lies and falsehoods and God will hold that person accountable. To all repentant, God offers forgiveness full and free. He loves all sinners and desires that they come to the knowledge of the truth and that truth is the sin is exposed and the death of Christ pays the price of that sin forever. The cross does not shrug off sin but overcomes it with the love strong enough to face it, pay its price, and suffer in the place of the sinner. That is our hope and that is YOUR hope, my friend.