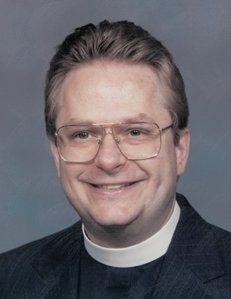 Too often we presume that heroic figures are larger than life.  Like Marvel characters, they exhibit superhuman powers and accomplish unbelievable feats.  Most of my heroes are thoroughly ordinary and fairly anonymous.  Few of them realize the impact they have had on me or others and most of them are content to be anonymous.  They have excelled in being ordinary.  But that is not a bad thing.  In fact it is a good thing.  They have done their duty without fanfare and been faithful without expectation of great reward.  They have been selfless without drawing attention to their sacrifices and they have been good and decent people without being self-righteous.

Among those heroes is David Michael Ulm.  Hardly anybody will recognize his name.  David was my friend for 45 years.  We went to school together and began our ministries as pastors the same year.  From seminary David was called to St. John Lutheran Church in Au Gres, MI.  He served there for 3 1/2 years before accepting a call to Good Shepherd Lutheran Church in New Baltimore, MI, where he served for 35 years.  David never served a large congregation but each congregation he served was enlarged by his time there.  Few may ever recall one of his sermons but that was not because there was anything wrong with them.  It was because they were solid, faithful, and orthodox.  He was not flashy in the pulpit but he was faithful and faithfulness is underrated.  He preached solid and faithful sermons, carefully crafted and rehearsed.

David loved the liturgy.  He was careful and precise in the chancel.  He went over checklists for each Divine Service and practiced every word of the liturgy.  He handled the things of God for the sake of God's people.  He never forgot that.  His demeanor was reverent and respectful and he taught by example that the most precious things of this life are the things we find it hardest to value.  David was solidly Lutheran but understood that the best of Lutheranism was not anything sectarian but was in everything that was catholic and apostolic.


That does not mean David was perfect.  He had his guilty pleasures (Dark Shadows was among them).  He did not take very good care of himself and he died too young.  He did not pick up the phone when you called (even when you yelled at him in the answering machine or voicemail to just pick up the darn phone!).  But he did call you back.  We spent many hours and days together -- from being baked red on Long Beach Island in New Jersey to the Renaissance Festival in Michigan and from tourist stops around Detroit with obligatory church supply store visit to trips to Canada and stores specializing in all things British!  We went to Synod Conventions together and saved up our per diem money to splurge at the best restaurants on our time off.

When I got the call to Clarksville, I blamed David. After all, his dad had managed the Frosty Morn plant in Clarksville in the 1970s and his family lived on the corner of Memorial and Fairway in a house I pass by several times a day.  Who else would preach at my installation 27 years ago?  And he returned the favor.  I preached at his installation at Good Shepherd, using as the text Mark 10:35-45.  David retired from Good Shepherd and continued there as member, sacristan, and deacon for the Divine Service.  But he did not live to enjoy much of that retirement and died sometime in his sleep on Sunday, May 24.

David was the kind of friend you could not talk to for months and then pick up the phone and gab away as if you lived next door.  I loved him as a brother, respected him as a brother pastor, and loved the way he served so faithfully without expecting any notice or reward.  He was a hero, the kind of heroes that make for great friends and even greater pastors.  I hate that his death in this time of distancing, isolation, and restrictions means that his funeral will be small but I am confident that it would not bother him.  To his mother, sister, and brothers I can offer only my deepest sympathies and regrets that he left us too soon.  But he will receive the only accolades that count -- the well done, good and faithful servant that God says of those who have finished their course in faith and now rest from their labors.  Today I am in New Baltimore, Michigan doing the final duty of our friendship, preaching at his funeral.

May his memory be eternal. The Lord uphold you in your grief Pastor.