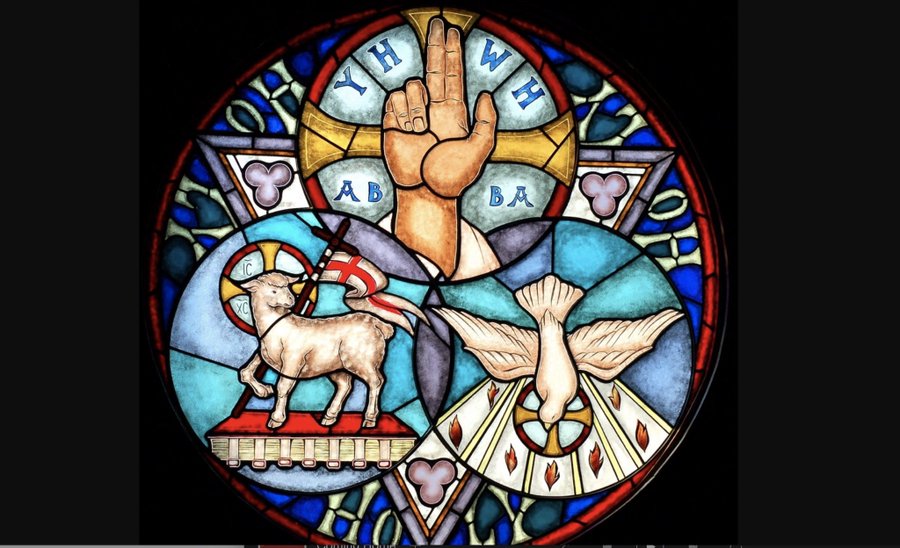 It is truly meet, right, and salutary that we should at all times and in all places give thanks to You, holy Lord, almighty Father, everlasting God, who with Your only-begotten Son and the Holy Spirit are one God, one Lord. In the confession of the only true God, we worship the Trinity in person and the Unity in substance, of majesty coequal. Therefore with angels and archangels and with all the company of heaven we laud and magnify Your glorious name, evermore praising You and saying:


On this day we sing of the God who has revealed Himself in the mystery of the Holy Trinity.  The Trinity is not some ancillary dogma but the heart and core of our Christian identity.  To get this wrong, is to cease to be Christian.  To get it right is not to presume to unpack the mystery of the God who is one and one in three but to confess it faithfully before the world.  What better way to do this than with the ancient texts of the Gloria, the Te Deum, St. Patrick's Breastplate, and the Athanasian Creed.  So here they are below.

Whoever desires to be saved must, above all, hold the catholic faith.
Whoever does not keep it whole and undefiled will without doubt perish eternally.
And the catholic faith is this,
that we worship one God in Trinity and Trinity in Unity,
neither confusing the persons nor dividing the substance.
For the Father is one person, the Son is another, and the Holy Spirit is another.
But the Godhead of the Father and of the Son and of the Holy Spirit is one:
the glory equal, the majesty coeternal.
Such as the Father is, such is the Son, and such is the Holy Spirit:
the Father uncreated, the Son uncreated, the Holy Spirit uncreated;
the Father infinite, the Son infinite, the Holy Spirit infinite;
the Father eternal, the Son eternal, the Holy Spirit eternal.
And yet there are not three Eternals, but one Eternal,
just as there are not three Uncreated or three Infinites, but one Uncreated and one Infinite.
In the same way, the Father is almighty, the Son almighty, the Holy Spirit almighty;
and yet there are not three Almighties, but one Almighty.
So the Father is God, the Son is God, the Holy Spirit is God;
and yet there are not three Gods, but one God.
So the Father is Lord, the Son is Lord, the Holy Spirit is Lord;
and yet there are not three Lords, but one Lord.
Just as we are compelled by the Christian truth to acknowledge each distinct person as God and Lord,
so also are we prohibited by the catholic religion to say that there are three Gods or Lords.
The Father is not made nor created nor begotten by anyone.
The Son is neither made nor created, but begotten of the Father alone.
The Holy Spirit is of the Father and of the Son, neither made nor created nor begotten, but proceeding.
Thus, there is one Father, not three Fathers; one Son, not three Sons; one Holy Spirit, not three Holy Spirits.
And in this Trinity none is before or after another; none is greater or less than another;
but the whole three persons are coeternal with each other and coequal, so that in all things, as has been stated above, the Trinity in Unity and Unity in Trinity is to be worshiped.
Therefore, whoever desires to be saved must think thus about the Trinity.
But it is also necessary for everlasting salvation that one faithfully believe
the incarnation of our Lord Jesus Christ.
Therefore, it is the right faith that we believe and confess that our Lord Jesus Christ,
the Son of God, is at the same time both God and man.
He is God, begotten from the substance of the Father before all ages; and He is man,
born from the substance of His mother in this age:
perfect God and perfect man, composed of a rational soul and human flesh;
equal to the Father with respect to His divinity, less than the Father with respect to His humanity.
Although He is God and man, He is not two, but one Christ:
one, however, not by the conversion of the divinity into flesh, but by the assumption of the humanity into God;
one altogether, not by confusion of substance, but by unity of person.
For as the rational soul and flesh is one man, so God and man is one Christ,
who suffered for our salvation, descended into hell,
rose again the third day from the dead,
ascended into heaven, and is seated at the right hand of the Father, God Almighty,
from whence He will come to judge the living and the dead.
At His coming all people will rise again with their bodies
and give an account concerning their own deeds.
And those who have done good will enter into eternal life,
and those who have done evil into eternal fire.
This is the catholic faith; whoever does not believe it faithfully and firmly cannot be saved.
Posted by Pastor Peters at 6:00 AM