By now you have heard and probably forgotten the initial voice of one suggesting that much, well, most all sacred art is racist, white supremacist propaganda.  It should not surprise anyone.  Considering the way some have moved to remake the public square and remove any statues or monuments that could be deemed objectionable, it was only a matter of time before the demand would be made of churches.

Now the truth is that some are poised and ready to discard some of what is the greatest art and statuary every produced by man.  That is because they have decided that art is not art but a medium with an agenda and a point of view and a political edge to it.  Art cannot exist apart from its context nor can art be viewed apart from the ever changing circumstances of opinion.  It does not matter whose art it is.  It only matters if people find it objectionable.

The reality is that much of this art is explicitly Western and, well, white.  These are not the only depictions of Christ.  In the East the icons of Christ have an Eastern appearance.  Look at figures and crucifixes in African churches and they reflect the features of the people who look to those crosses in faith.  It happens in Asia as well.  It should happen everywhere.  When we look to the crucifix we ought to see a figure of Christ that does not try to imagine what He might have looked like but looks back at us with the face of those for whom He has suffered and died.  That is not simply okay.  That is the point.

But there is more.  No matter if Christ is portrayed as a Black man or Asian man or white man or any other race or ethnicity, that is not what makes Him objectionable.  That is merely an irritant to people who have decided to sanitize history and erase those with flaws in their character and their past.  What makes Christ objectionable is that He suffers and dies for sinners -- even for those sinners who refuse to confess their sin or admit them.  He died for all even though not all believe in Him or receive the fruits and benefits of His obedient suffering and life-giving death.  What makes the crucifix and most religious art objectionable is not how Christ is portrayed but rather that we are sinners in need of a Savior and that this Savior must be the Son of God in human flesh and that the sins He has come for are so terrible that they can only be forgiven by His own perfect sacrificial offering on the cross.  In other words, what makes Christ most objectionable is that He has come for sinners who have no hope of redemption without His self-offering.  Everything else is just on the surface. 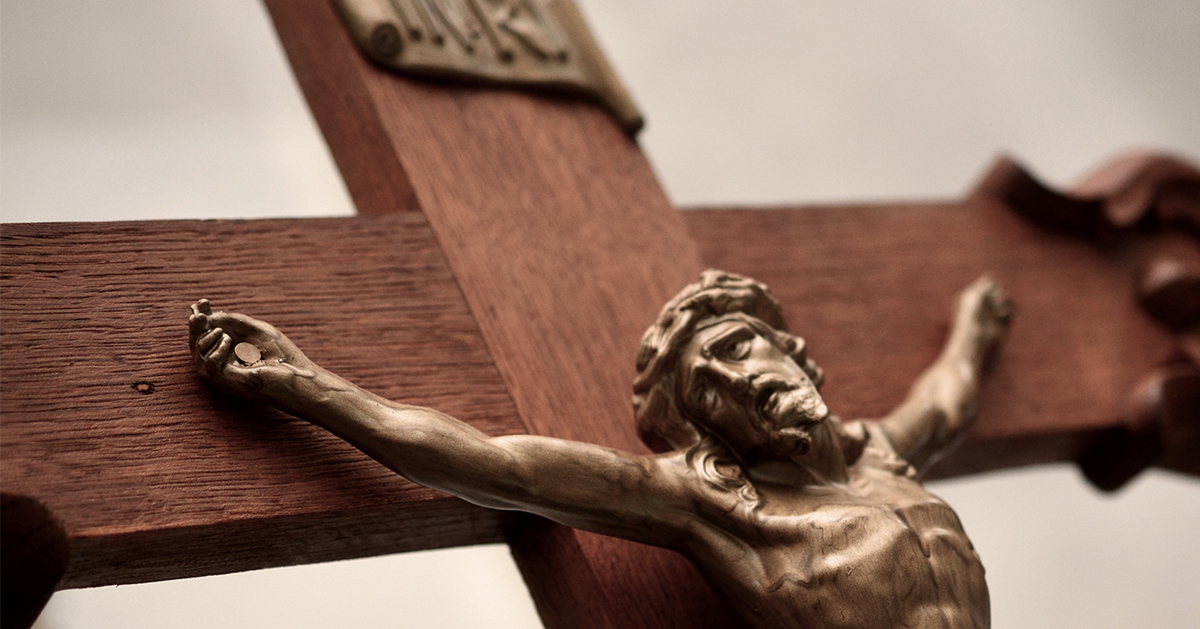 I will do everything in my power to prevent those who object to the color of the Christ in art and crucifix in the Church but I long for the day when these will be found objectionable on the basis of what they stand for -- the sin that has brought death, guilt, shame, and confusion to humanity and the Savior who wore our flesh so that He might suffer in our place for our sin, pay with His death to rescue us from its punishment and the consequences of God's wrath, and rise to deliver us back into the Father's arms as His own, created, redeemed, and restored by grace.  That is the problem we must face.  The iconography of the Church is not art for art's sake but the Gospel for the eye.  As Luther once reminded us, this is not art and not merely a crucifix but a means of grace:

Since Jesus was a person of color (a Jew with brown skin, brown eyes, and black hair, as far as we could surmise), and was killed by those who could not abide Who He was, not just what He stood for, it is ironic that people disenfranchised are upset. It doesn’t matter what color skin the Messiah is represented as having (red, yellow, black or white - remember the song from your childhood?) It is the TRUTH of our sin and His saving act that matters.

These are dire and frightening times in which we live, but Jesus is our Lord no matter what. Powers and movements come and go, nothing lasts forever. Even great Art may be destroyed (though I pray not); we may be called upon to give our lives when they finish with the statures, but we have the promise the Church will never fail. May new, great artworks be born of this time.