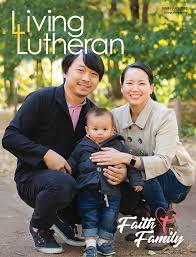 I opened the copy of The Living Lutheran that sat on top of the stack of mail in my office.  Wrong move.  First of all is the celebration of 50 years of the ordination of women, 40 years of the ordinary of women of color, and 10 years of the ordination of those with a gender of choice and all the other letters that go with it.  But I will pass on that for now.  This is the ELCA and it is predictable.  These are the things that are featured in their official periodicals now for some time.  If it is not normal, it is the normal that their sanctioned media choose to portray.

Then there was an article that piqued my interest.  Generation to Generation: How a father and son see faith and masculinity.  Well, big mistake.  It is not so much about faith at all but greatly about masculinity -- though not quite what you would expect.  Where to begin?

Son celebrates that Dad taught him that God is not stagnant but that our conception about God and our relationship with God fluctuates.  It is a flexible faith for a flexible deity.  Father gushes about how much he has learned from his son on how we are intended to live as part of a harmonious creation.  Apparently the family did not spend much time in the Catechism.

Then to the masculinity.  First a definition:  a person who performs the male gender and also is born with male physiological characteristics. . .  Hmmmm.  Well, it is the ELCA and the ELCA is a parrot of the current thinking and jargon on gender stuff.  Apparently you are healthy if you  are untethered from the cultural norms (except, of course, the current cultural norms; the bad ones being the old ones reflected in, say, the Scriptures).  Dad insists that Genesis 1 and its binary creation is inherently false and that masculinity is defined by love for neighbors and creation (but not God?!?!?!).  Well, what do you expect from a cisgendered male?!?

Son says God has called for acceptance and love.  Apparently holiness and righteousness are not working words in the new vocabulary.  Then comes some sentimental stuff about men cooking and women earning more than men along with a complaint about the few times he was spanked growing up.  Dad hopes his son will not repeat his mistakes in parenting and promises to reflect upon why he did what he did as parent growing up.

Back to faith.  Dad is sure God exists despite his doubts but, after all, you don't have to be possess perfect faith in God to be perfectly faithful to God's creation.  Nothing there about Jesus, sin, death, or anything else of orthodox Christianity.  Son says his faith's evolution rarely strengthens my belief in God but does bolster his faith in humanity. He also warns against attributing too much to the Holy Spirit in your life.  But there was never much danger of that in this conversation.

Dad insists that good/bad is bad binary.  But since none of us can know the mind of God, naivete is not a bad thing and more naivetes are even better!  The Sufi mystic Rumi might be quoting Jesus (or not) and says beyond good and bad is a nice field where we can picnic and where we can explore the freedom to be wrong.

My snark was in high gear today.  Nevertheless, as goofy and ridiculous as this article was and is, the bigger questions behind all of this is what does the ELCA believe, confess, and teach?  In other words, is this stuff even remotely Christian.  And if it is not, then why does the ELCA promote such drivel and can the ELCA legitimately claim to be Christian anymore?  It gave up Lutheranism a long time ago.  By the way, lest you think that these are two normal pew sitters, the son is graduating from an ELCA college and the dad is an adjunct prof at an ELCA seminary.  Well, the son did say that the grace of God is the gift of making mistakes and being forgiven.  Perhaps they are Lutheran after all.  Since some Lutherans believe that since it is God's job to forgive, it is our job to give Him something to forgive.  And they gave God a lot to forgive in that brief article.

If you are a member of an ELCA congregation, you need to decide if this is reflective of who you are or not.  And if this is not who you are, you need to find an orthodox Lutheran congregation and join it.  Nobody who is uncomfortable with this kind of thing should remain in a church body that promotes this before their membership and the world.
Posted by Pastor Peters at 6:00 AM

For “real” Lutherans who want a good take on masculinity, read MAN UP, by Pr. Jeff Hemmer.

I was a pastor in the ELCA. Yes, they propagate false doctrine and at the core of their false doctrine is works righteousness and with it self-righteousness. They have constructed a 'new' religion. (BTW: When the Commission for a New Lutheran Church was formed (which led to the ELCA), a colleague, "The problem was seen in the use of the world "new"".