The problem with newer church buildings generally is that they focus on where we are and not where we are headed.  Even the ubiquitous A-frame of the 1950s and 1960s had a definite peak pointed beyond those gathered in its aisles.  It may not have been all that pretty and it was certainly cheap to build but its intention was still to point us to that which was to come.  The buildings formed from industrial materials with warehouse or retail style focus fail miserably in this regard.  Some of them have black painted ceilings to hide the exposed mechanicals and to keep the eye focused on the stage.  Some buildings have such low roofs as to make the room seem like folks are squeezed into a shoe box -- no matter how large the physical size -- and the end result is an uncomfortable closeness with those around you without the intentional discomfort of your smallness before the Mighty God.

I suppose the architecture only follows the focus of what happens inside and when the focus from the stage or lectern is on improving the present moment, that is what the room will echo.  That is, of course, the modern foible.  Too many churches seem intent upon helping people find happiness or success in the present moment but seem unprepared or unwilling to be ready for what is to come -- much less anticipate that awesome fulfillment.  We were well on our way toward this goal of focusing almost exclusively on the present before COVID came along and helped to steal our attention on the preservation of this life rather than the preparation for the life to come.  But modern Christianity has gone even further in this direction and is now even more distant from the themes of Jesus' preaching.

Architecture of old was an aid to keeping the attention of God's people and those who serve them where that attention belongs.  Repentance, readiness, and rejoicing in the promise being fulfilled as we speak.  There is less talk of repentance today perhaps because of less talk of sin.  There is less talk of readiness for the kingdom of God perhaps because we either no longer care about it or are so sure of it (cheap grace) that it does not matter to us all that much.  And there is less rejoicing in the promise because we have so much to rejoice in now -- our vast technology, our entertainment culture, our preoccupation with feelings, and our abundance of free time.

The architecture of old intended to make us seem small.  Because we are.  We are not demigods nor are we gods.  We are sinful people, marked for death, and without hope in ourselves.  That message is not popular but it is the only way that the cross makes sense.  Without an acknowledgement of our sinful smallness, the cross ends up being some ill-conceived attempt to inspire selflessness.  All well and good if Jesus dies but not so good if we are the ones dying!  As St. Paul reminds us, it is hard enough to find folks to die for a good cause much less for an uncertain or less than noble one.  Sitting in church is meant to remind us that God is great, mighty, and a force to be reckoned with.  It is meant to confront us with the unpleasant prospect of meeting this God alone.  It is also to point us to where this God has met us -- in the promise laid down from the beginning of the ages, fulfilled in Christ's flesh and blood, revealed in His suffering and death, and triumphant in the resurrection from the dead.  The building was both the place where we met the stark reminded of what sin did and our helplessness to repair it and what God has done and the hope of a future far beyond this present reality. 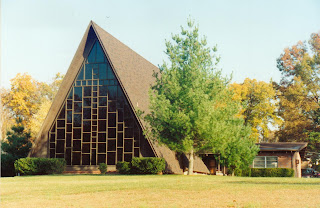 What happens in worship is the same.  We begin with the general confession which is sort of a hit in the gut before we ever approach God.  But God's response is to absolve the penitent and give us a place in His presence.  The liturgy rehearses the works of God in saving us and delivers to us the fruits of that redeeming work in the Word that gives life and the Body and Blood of Christ that feeds us this life as the foretaste of the eternal which is to come.  We leave having had our focus turned from the present and all of its evil and disappointment to the future and all of its promise.  Hope restored, we walk forth into the world as agents of this future destiny, doing the good works that display in a moment in time the eternal love that has redeemed us and paid for the sin of the whole world.  Architecture can either aid in this task or fight against it.  It is never neutral.  Just like the music in the Divine Service, it either complements the Gospel or contradicts or conflicts with it.

So I would gladly prefer an old A-frame to the metal skinned warehouses or low roof living rooms that too often are what passes as space for worship.  It is not preference but it is about that which echoes the Gospel in turning us from ourselves to Him in whom we have forgiveness, life, salvation, and an eternal future.

I have said for years if you take the steeple (if it’s there at all) and the signs off these “warehouse” churches, you could use them as just that: a warehouse. Wait. Isn’t that what they really are? Warehouses full of people for sale? Sorry, I know that’s really snarky. Think about it, anyway.

Thanks Pastor.
I worship at Concordia-Lutheran Church-Missouri Synod in Kingsport, TN and our building is a "ubiquitous A-frame of the 1950s and 1960s" The A-frame is a challenge in that it is hard to both heat and cool and the acoustics are, to say the least, a challenge.
The A-frame is pretty easy to maintain in that the steep shingles last a long time and re-shingling pretty much gives you a new building.
The organ and choir-loft is on the second floor in the rear... so the choir doesn't get too "proud" by drawing attention to itself. Our beautiful singing seems to come " from on high".
I like your comments that both architecture and Liturgy can serve to point us sinners toward Father, Son and Holy Spirit...pointing us up and away from ourselves and toward where the real Power lies.
I sent a copy of your post to my Pastor...but inserted a picture of Concordia's interior for your stock picture of a "ubiquitous A-frame of the 1950s and 1960s"
Thank you, Pastor. You made my day.
Timothy Carter,
simple country Deacon