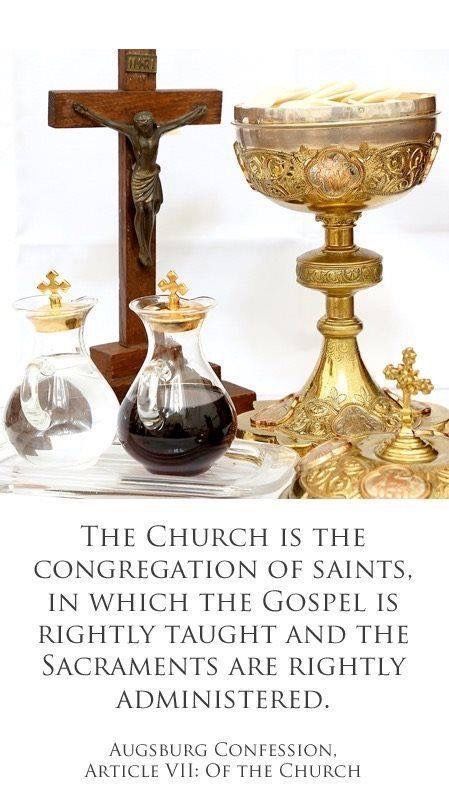 “Our people teach that the saints are to be remembered so that we strengthen our faith when we see how they experienced grace and how they were helped by the faith. Moreover, it is taught that each person, according to his or her calling, should take the saints good works as an example.”

Charles Porterfield Krauth notes that the doctrinal sections of the AC begin with God and end with the saints. Most fitting. There is undue fear of the saints in current Lutheranism (a bit of reaction, I suppose, to Roman excesses) that would have surprised and shocked the Augsburg Confessors. Instead of ignoring the saints (or pretending "they're just the same as you and me"), the Confession approves honoring the saints by telling their stories (the history of the saints) so that we may follow the example of their faith and of their good works, as appropriate to our calling.

Since the Emperor was the audience at the moment, they remind Charles V that he "may follow the example of David in making war to drive away the Turk from his country. For both are kings." But if the saints may be honored by the retelling in the Church their stories, yet the Confession is clear: "...the Scriptures do not teach that we are to call on the saints or ask the saints for help. Scripture sets before us the one Christ as the Mediator, Atoning Sacrifice, High Priest, and Intercessor. He is to be prayed to. He has promised that He will hear our prayer. This is the worship that He approves above all other worship, that He be called upon in all afflictions." The clincher is in 1 John: "If anyone does sin we have an advocate with the Father." The reserve of this article is astonishing and a testimony to the good will of the Confessors to try by all means to maintain unity with Rome to the furtherest extent conscience would allow. What is unstated here but clearly running in the background is that the Roman practice had made the faithful imagine that they could not come to Christ directly, for He was thought of as a stern judge, but must instead go to the saints who might soften Him up a bit, and lead to Him having mercy on us. Particularly was the Most Blessed Virgin called upon to accomplish this, though by no means her alone. "Saint Ann, help me and I will straightway become a monk!" the terrified young Luther had once cried. In the Larger Catechism Luther will comment that where we turn for help in time of need discloses who we are trusting as our God. If in time of need, we turn to the saints, because we think that they might give us a better hearing than our Lord Jesus, then we have indeed tragically turned the saints into idols and betrayed the very faith that they sought to hand onto us.

Two closing thoughts that are tangential to AC XXI, but explicit in Ap XXI: we do not deny that the saints in heaven intercede for the church in general. Granted, there is no explicit Scripture that teaches this outside of the dream in 2 Maccabees where Jeremiah is seen pleading for Jerusalem. But Scripture does teach that the angels intercede for us (Zechariah 1), and since we know that our Lord, the premier Saint, lives to intercede for His Church to the Father, it is quite sound to hold that the saints in heaven join Him in His intercession for the pilgrim church on earth.

Thus, do not allow yourself to be drawn into typical Roman or Eastern polemics about the intercession of the saints as though we denied it; we do not. Rather, what we have always denied is that the fact that they intercede for the Church in general justifies the practice of the saints on earth invoking the saints in heaven. And since this is so, it is contrary to the Gospel to require people to pray to the saints in heaven. Second, the joy of the saints' company is not that they invite us to focus on them. Rather, the very mark of the saints is that they invite us to focus with them upon the Lamb who redeemed them with His own blood, sanctified them in the waters of Baptism, and made them shining witnesses to the glory of His resurrection. They are not dead. They live in Him. Their spirits join us (and we them) in the Divine Liturgy (Hebrews 12!) and we sing a united song with angels, archangels, and with all the company of heaven. "Holy, holy, holy!"

Much is made of saints whom the Church declares, the few among the many.  If you are a Lutheran, you certainly acknowledge the giants in the faith with which we walk in life, with whom we live by baptism, and whose voices join with ours in the Sanctus.  But. . . you do not see saints as being few or exceptional.  They are the many whom God declares as His own, clothes in Christ's righteousness, and who wear the name of Christ.  On this day we acknowledge the giants, admit the unlikely saints, and rejoice in the sainthood which we share by baptism and faith.  In the liturgy for this day, we are as close as we can be to those who have gone before us with the sign of faith, as we are every Divine Service, when angels, archangels, and all the company of heaven join us to sing Holy, Holy, Holy Lord God Sabaoth!

"There is undue fear of the saints in current Lutheranism (a bit of reaction, I suppose, to Roman excesses) that would have surprised and shocked the Augsburg Confessors."

There is not one bit of substantiation of such hearsay.