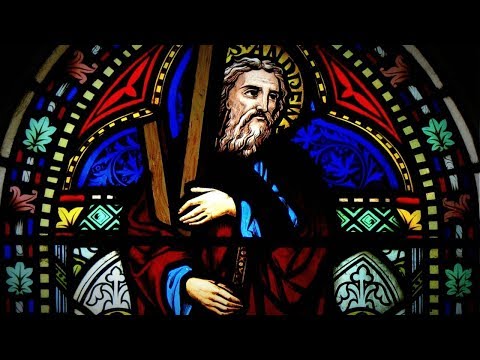 In the fourth Gospel we learn that Andrew was a follower of St. John the Baptist.  It was this testimony of the prophet that first led him and St. John the Evangelist to follow Jesus (John 1:35-40).  It was Andrew who first recognized Jesus as the Messiah, rushing to introduce our Lord to his brother, Peter, (John 1:41). The two brothers both became disciples of Christ, leaving all things behind to follow Jesus (Luke 5:11; Matthew 4:19-20; Mark 1:17-18).

St. Andrew is listed in the various lists of the 12 Apostles given in the New Testament (Matthew 10:2-4); Mark 3:16-19; Luke 6:14-16; Acts 1:13) but always numbered among the first four names on that list.  In Mark 13:3 it is said he joined with Peter, James and John in putting the question that led to the Lord's great eschatological discourse.  St. Andrew has the distinction of offering to Jesus the little boy's lunch for the feeding of the five thousand, saying: "There is a boy here who has five barley loaves and two fishes: but what are these among so many?" (John 6:8-9).  Just days before our Lord's crucifixion, when certain Greeks asked Philip that they might see Jesus, Philip referred the matter to Andrew as to one of greater authority, and then both told Christ (John 12:20-22). Like the majority of the Twelve, Andrew is not named in the Acts except in the list of the Apostles, where the order of the first four is Peter, John, James, Andrew.  There are no other direct mentions of him in the rest of the New Testament.

When the Apostles went forth to preach to the Nations, it appears that St. Andrew took an important part. Eusebius (Church History III.1), apparently relying upon Origen, tells us that Scythia was St. Andrew's mission field. St. Gregory of Nazianzus (Oration 33) mentions Epirus and St. Jerome (Ep. ad Marcell.) Achaia, and Theodoret (on Ps. cxvi) Hellas.  Nicephorus (H.E. II:39) says St. Andrew preached in Cappadocia, Galatia, and Bithynia, in the land of the anthropophagi and the Scythian deserts, then in Byzantium itself (appointing Stachys as its first bishop), and finally in Thrace, Macedonia, Thessaly, and Achaia.  Most sources agree that he was crucified by order of the Roman Governor, Aegeas or Aegeates, at Patrae in Achaia.  Bound, not nailed, to the cross so as to prolong his sufferings, it is said St. Andrew asked not to be crucified in the manner of Jesus.  So it is thought that the cross on which he suffered was a decussate cross (now generally known as St. Andrew's Cross).  This evidence is not conclusive although the church year believed his martyrdom took place during the reign of Nero, on 30 November, A.D. 60).  November 30 is his feast day.

It might be said that without St. Andrew's rush to tell his brother about Jesus, the whole Gospel might have been written very differently.  In our age where we are quick to tell others about our every thought, whim, preference, or desire EXCEPT faith, St. Andrew stands out as one who was true from beginning to end.  Perhaps we need to be more like him in this regard, less apologetic about the faith and more of a promoter of what it is that we believe, teach, and confess.  In any case, St. Andrew's boldness was honest and forthright, true to his faith in Christ, and confident that this Savior had come not for him only.  As I write this, I note that in so many of our families anymore, the faith is not shared and it places a considerable burden upon the faithful when spouse and family are at odds with the faith and belief of the Christian.

Just as on this day we traditionally remember St. Andrew, first of the Apostles and brother of Simon Peter, on this coming December 10th Lutherans should remember the 500th anniversary of an important event in the Lutheran Reformation.