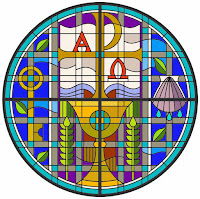 A very long time ago a friend who had been Lutheran and became Orthodox visited me in the parish I served then.  I asked him what he thought after he had witnessed the Divine Service in that parish.  It was an invitation for him to critique me and my presiding and preaching.  His critique went where I did not expect it to go.  He said he found the Divine Service worship wordy and the lack of silence somewhat overwhelming.  Now the point here was not the number of words.  The Divine Liturgy of St. John Chrysostom has quite a few words as well.  But t  he impression is different.  The priest is sometimes behind the iconostasis and the people pray on their own and the singing that accompanies the liturgy seems sometimes to go on while other things might compete for the attention of the worshiper.  On top of that is the overwhelming amount of sensual appeal in addition to the aural.  It is a banquet for the eyes, nose, ears, and mind.

As is often the case, there are those Lutherans who read this blog who are not sold on the value of ceremonies, incense, art, or even, perhaps, music for that matter.  They love preaching, rightfully so, but the rest of the Divine Service is less important or impressive to them.  It often seems they tolerate these things because Lutherans do them, too, but they believe worship is mostly for the mind and not for the rest of the body.  It is strange because this cerebral worship is quite out of keeping with the worship of the temple.  It is as if the worship of the New Testament is to make up for the unfortunate indulgence to the rest of the senses found in the worship of the old covenant.  I do not get this.  I do not get it at all.

Luther could be caustic and sarcastic and dismissive of things other than preaching but this was in the context of a church where preaching barely existed and where everything else was seen not simply as valuable but also as a work that contributed to Christ's work of atonement.  It is no wonder that Luther would speak the way he spoke or the Lutheran Confessions would carefully distinguish ceremonies, rituals, usages, and traditions that were salutary and pious and confessional -- even educational -- from the Roman idea of the same that earned something of God's favor by doing them.  But that does not translate into the premise that worship is primarily or exclusively for the mind or that these other things have no legitimate place within the Divine Service.  Lutherans were not and are not iconoclasts.  Lutherans not only enjoy the arts but employed and still employ them richly in service to the Gospel.  But some Lutherans, it seem, remain unconvinced.  Some still speak of the Lord's Supper as if it were an unnecessary addition to the preaching service which we keep only because we must -- if we pay attention to the Word of God -- and not because we find value in it.

I have come to believe that worship moves too quickly across the page, there is not enough silence, and we do not give appropriate time for reflection.  This is a degeneration of Lutheranism and not an expression of its true essence.  We are not bound to the sacred hour time span nor should we ever be timekeepers in the House of God.  God has not simply given us preaching -- as wonderful as it is -- but has richly provided the splash of baptismal water, the quiet solitude of private confession, and the taste of bread and wine and the food of Christ's body and blood.  All of this takes place within a place with beauty fit for the eye and ear in the liturgical art of the building and the musical art of hymn, chant, song, and melody.  This is not exceptional but as it should be.  Sure, some will complain about the cost but I could give you a lesson in furnishing the Lord's House, purchasing a grand pipe organ, and finding a source for good art without breaking the bank.  It is an investment in our future and not simply an indulgence.