Back to Christmas for a moment. . . 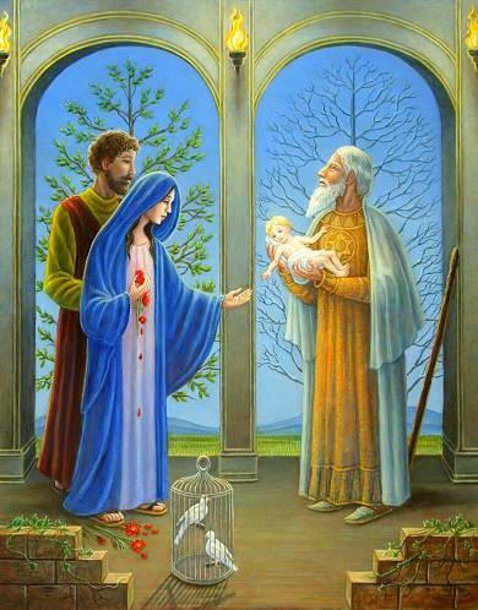 The Presentation of Our Lord and the Purification of the Blessed Virgin Mary fall on the fortieth day of Christmas.  Though we sing of twelve days of Christmas, this is, in my mind, the real conclusion of the whole Christmas cycle.  Though in just a few weeks we will be past the Transfiguration of Our Lord and into Lent where our attention turns on the glory of His holy Cross and Passion, for now a bit of Christmas business remains.  And here we are, beckoned by the Lord back to the holy mother carrying in her arms her first-born and the Temple requirements fulfilled.  There with the infant Lord Jesus in the courts of His House, His Holy Sanctuary, a couple of more surprises.  We find an old man who sings of his waiting fulfilled and the peace that allows him to depart and an old woman who worshiped and prayed night and day for this day to come.

The Scriptures are filled with curious details.  Some delight us.  Some make sense to us.  Some confound us.  But most of them were not meant for us to comprehend or give consent to -- rather, they exist as part of God's great plan and work.  This goes all the way back to Eden when God cursed the woman with pain in childbirth while at the same time promising a Savior Who would be the Seed of the Woman.  From Eve on down the line to the Blessed Mother, every aspect of a woman’s fertility and childbearing among the chosen people was both a proclamation of law -- of the curse of sin -- and a proclamation of the promise of the Gospel.

The child Jesus is brought in remembrance of details.  When the Lord brought against Pharaoh and the whole land of Egypt the tenth great plague, He sent the Angel of Death by night to slay all the firstborn sons of both man and beast.  Down from the firstborn of mighty Pharaoh on his throne to the lowliest of the slaves, the plague fell.  Except, of course, on the chosen.  Every firstborn son of Israel was spared the death of this plague, covered and protected as they were by the blood of the Passover Lamb.  Where the Lord’s avenging Angel saw the blood of the lamb, he passed over the home and spared the son.

Thus by the Lord's command and promise, every firstborn son of Israel (man and beast) belonged to Him by right.  These firstborn sons belong to Him, because the Lord spared them from death and sanctified them for Himself in the Exodus.  From this, then, came the requirement that the firstborn animals among the people were to be sacrificed to the Lord as His, and all the firstborn sons of the people were to be given to the Lord for His service.  Now it came to Jesus, God's own Son, to be presented in fulfillment of the law.

On this Candlemas, we make our way back to Christmas for a time before heading onward up to Transfiguration's mount and down the valley to the cross.  Not just details but God at work guiding the plan to its promise and our salvation.  No wonder we can depart in peace.  God has done all things well.