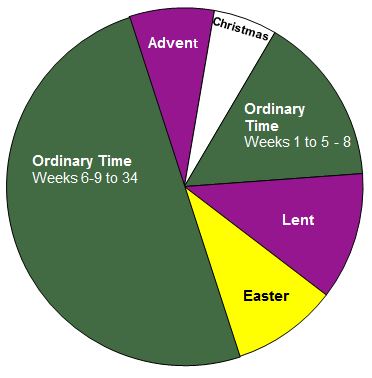 If you have been noticing, the vestments and paraments moved to green in mid-January.  This is a signal of a return to more routine Sundays from the festival services of Christmas, the holy days after Christmas, the Circumcision and Name of Jesus, Epiphany, and the Baptism of Our Lord.  I will admit that there have been many festive services squeezed into the short weeks of the end of December and the beginning of January.  Perhaps too many for some.

Although we retain the nomenclature of Sundays after Epiphany, Rome has chosen to number these Sundays as Sundays in ordinary time -- in fact, the first such Sundays of this Church Year.  Some in Rome and others outside of Rome are not so comfortable with the rather dull description of these Sundays after the Epiphany of Our Lord as simply ordinary.

Of course, this usage of the term ordinary is not quite what we think.  It is not necessarily a reference to that which is “common, usual, or unremarkable.”  It owes its meaning instead to the English word ordinal which references the position of something in relationship to a series.  Think here of how we use the term first instead of 1 or second instead of 2, etc...  In Latin, it is Tempus per annum (time through the year).

Rome once counted these Sundays after Epiphany as we Lutherans do but that calendar was replaced for most folks in 1970 -- strangely not for those who continue to use the Extraordinary Form of the Mass.  In the traditional calendar of the Extraordinary Form, this is the Time through the year, divided into time after Epiphany and time after Pentecost. The terminology, “Tempus per annum … time through the year”,  still exists in the Novus Ordo calendar though Ordinary Time is the usual designation.  The same is true for the Sundays after Pentecost.  We still designated those Sundays after Epiphany but Rome picks up where Epiphany left off and begins numbering those Sundays also in ordinary time -- breaking for Lent and Easter and then starting up the number where they left off after Pentecost.

I read one explanation of this change which suggests that this helps to signal that the faith is not just something reserved for extraordinary moments, time, and seasons but it meant for the ordinary moments, times, and seasons of life.  In my mind this is a rather lame explanation.  I have also read that some tie the themes together -- suggesting that all the Sundays in Ordinary Time emphasize discipleship.  I am not sure that this is the case either.  In particular, the Sundays after the Epiphany continue to manifest our Lord's revelation of Himself begun in the visit of the Magi, publicly signaled in the waters of the Jordan, and now acted upon by the Lord's words and works in calling disciples, doing miracles, and preaching and teaching the Kingdom.  All of this is in preparation for the coming of Lent when that revelation is made even more profound.

I would encourage you to use the historic one-year lectionary. While on its face it may seem a strange way of ordering things it is exactly the opposite, and that is testified by its lengthy history across the western Church. Conversely, while the three-year lectionary seems on its face like it makes perfect sense, it’s actually a mishmash, constructed by panels of “experts” with agendas and influenced by politics. The result is an upending of the historic calendar, particularly with the time we are currently in, and exactly the kind of confusion you describe.