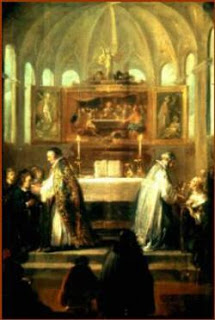 There are those, some of them even read this blog, who love to condemn any practice they don't like as Romish and the pastors who do them as Romish. There are those who would like to think that a liturgical minimalism is the piety most in keeping with conservative, confessional Lutheranism. They know that I disagree. Maybe they do not know that CFW Walther also disagreed. I am indebted to Pastor Will Weedon for first posting this and am happy to repeat it every other year or so. Just so that we do not forget!

C. F. W. Walther was the first president of The Lutheran Church—Missouri Synod, the President of Concordia Seminary, and the pastor of a number of parishes in St. Louis. The following is from an editorial he wrote for the predecessor of our periodical The Lutheran Witness:

If you insist upon calling every element in the divine service “Romish” that has been used by the Roman Catholic Church, it must follow that the reading of the Epistle and Gospel is also “Romish.” Indeed, it is mischief to sing or preach in church, for the Roman Church has done this also . . .Those who cry out should remember that the Roman Catholic Church possesses every beautiful song of the old orthodox church. The chants and antiphons and responses were brought into the church long before the false teachings of Rome crept in. This Christian Church since the beginning, even in the Old Testament, has derived great joy from chanting... For more than 1700 years orthodox Christians have participated joyfully in the divine service. Should we, today, carry on by saying that such joyful participation is “Roman Catholic”? God forbid!Therefore, as we continue to hold and to restore our wonderful divine services in places where they have been forgotten, let us boldly confess that our worship forms do not tie us with the modern sects or with the church of Rome; rather, they join us to the one, holy Christian Church that is as old as the world and is built on the foundation of the apostles and prophets. Der Lutheraner (Vol. 9, No. 24, p. 163, July 19, 1853)

I agree with you. The fact that the Catholic Church has strayed in many theological areas does not mean we need to reject the liturgical parts which the Lutheran church has often used. Only in areas where Mary and the saints are framed in a worship content need be rejected at once, Regarding Mary, the earthly mother of Our Lord, who never desired to be worshipped, the Protestant position has been to avoid mentioning her except in connection with the Nativity. We should at least, as Lutherans, remember to mention her in a sermon on occasion.