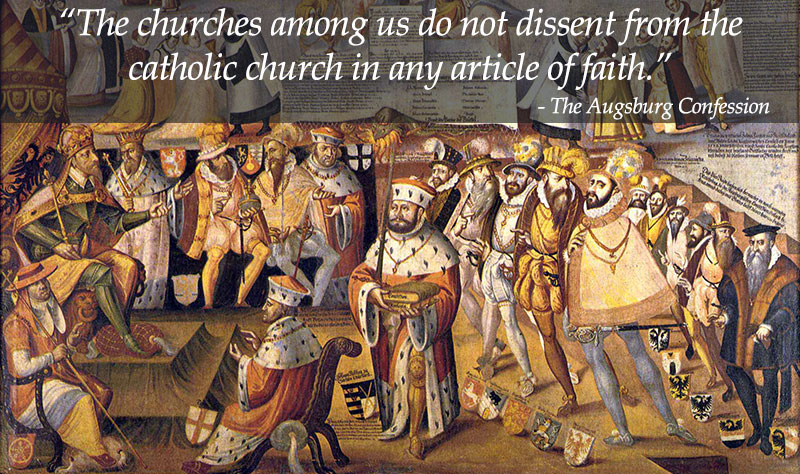 Augustana XXI says, in part, among us, in large part, the ancient rites are diligently observed. 8 For it is a false and malicious charge that all the ceremonies, all the things instituted of old, are abolished in our churches.

The article has to do with, primarily, the worship of the saints.  It occurs to me that the condemnations of Rome here are rather mild and are specifically directed to what happens in Church more than in the individual piety and devotion of the faithful.  The rejection here is for the sake of Christ -- it is a practice without Scriptural warrant or command and it is not neutral since it detracts from Christ as the Mediator, Propitiation, High Priest, and Intercessor.  But hidden herein is this statement about rites and ceremonies.  It is a disagreement about certain practices which entered into the life of the Church without rightful authority -- that is, without the command and promise of Scripture.  Furthermore, the presence of this practice contends not for but against the claims of catholicity by Rome.  In contrast, the Lutherans confess:  This is about the Sum of our Doctrine, in which, as can be seen, there is nothing that varies from the Scriptures, or from the Church Catholic, or from the Church of Rome as known from its writers. This being the case, they judge harshly who insist that our teachers be regarded as heretics.  Indeed, the claim of the Reformers is that Rome itself is being untrue to its own heritage of saints and faithful voices in presuming this later practice unknown to Scripture or the Church Catholic as being universal and essential.  The Lutherans affirmed that it has been not unusual but a common complaint that some abuses were connected with the ordinary rites and that the situation cried out for correction -- to which the Reformers stepped up to the plate and corrected what was in error.

Note well the connection between prayer and faith, worship and confession.  Here is clearly revealed that the Lutherans not only knew of but were motivated by concern for lex orandi les credendi.  Everyone could and must agree to the first statement of the article:   the memory of saints may be set before us, that we may follow their faith and good works, according to our calling.  There is no dispute here.  But it is interesting how the dispute is liturgical -- related to rites and ceremonies and not simply to statements.  We are our rites.

That is the whole point of this blog and my own meager contributions to the state of things among Lutherans today.  We are our rites and our ceremonies.  They are not adiaphora in the sense that they are things indifferent or that do not matter but only that strict uniformity cannot be legislated and the conscience cannot be bound by them.  There are matters of great concern and significance.  Our rites and ceremonies are our faith -- prayed on Sunday morning, confessed before the world as they are prayed, and taught as the truth that endures forever in the praying and confession.  This is why it matters what we do on Sunday morning.  We cannot simply punt to adiaphora every time somebody gets a wild hair to do something meaningful or relevant.  What makes our rites and ceremonies meaningful and relevant is not how we see them but how they confess and what faith they display to us and to the watching world.

How far and foolish we have come to think that we can adopt another identity on Sunday morning than the one we confess as the faith yesterday and forever the same!  It is as if we have gender dysphoria of the liturgical kind.  We play at these as if they were mere whims to be played with instead of true and profound confessions of faith -- in our rites and in our ceremonies.  We may have forgotten this but the Augustana has not.  We would do well to pay attention to what we say we believe, teach, and confess instead of paying lip service to it so that we can whatever we please in the Lord's House on the Lord's day.

The only major church festival (outside of a few Marian festivals that drew attention to Christ) celebrating a saint retained by the Lutheran Church during the Reformation is the Feast of St. Michael the Archangel, September 29. This seems strange to us today. What’s up with angels? Why are they, and specifically St. Michael, important for Lutherans? Why would it be edifying for the LCMS to recover this Lutheran emphasis and tradition?

“An angel literally is a messenger from the Lord God, both human and supernatural. An angel proclaims the Gospel. At the time of the Reformation, the Lutherans revised the celebration of former holidays and saint days in order to give greater prominence to the work of Jesus. St. Michael and All Angels was retained in the Lutheran liturgical calendar because it was seen as a principal feast about Christ. In fact, Philip Melanchthon, a colleague of Dr. Martin Luther, even wrote a hymn about St. Michael and All Angels (LSB 522, “Lord God, To Thee We Give All Praise”).