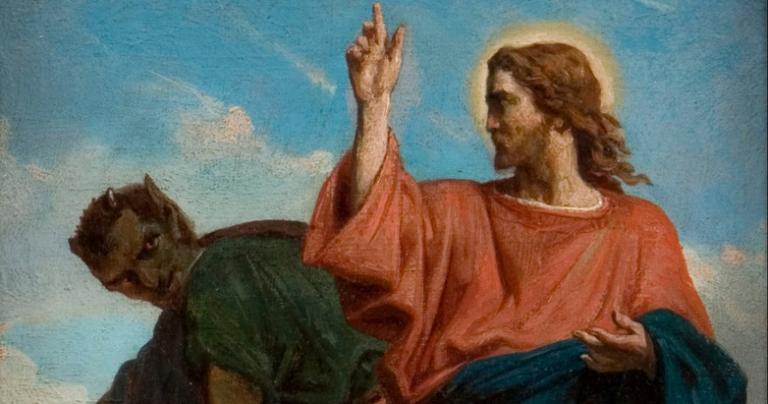 Sermon for the Sixteenth Sunday after Pentecost, preached on Sunday, September 12, 2021.

It did not take long for the Kingdom of God to become a spectacle.  A desperate man, his nerves shot and heart broken by the plight of his demon possessed son practically demands the disciples of Jesus fix what is wrong.  He did not come to them with faith but with a demand that they must do something.  When they could not do what he wanted, the argument ensued.  It was a distraction to Jesus and so He comes up to find out what is going on.  The man’s demeanor changes.  He seems calmer and more reasoned as he tells his sorrowful story.

Jesus responds with lament.  The generation is faithless and Jesus is wearied by the unbelief all around Him.  But Jesus has time for the man, time for his son, and time to confront the demons.  Jesus exploits the moment to teach the Kingdom. “All things are possible for the one who believes.”  Suddenly the man is convicted by the voice of God in his midst.  He confesses his faith in Jesus but he also confesses more.  He confesses the weakness of that novice faith.  “Lord, I believe; help my unbelief.”  Never one to ignore faith, even faith from an unlikely source, Jesus rebukes the unclean spirit and gives the boy back to his father.  The healing of the boy did not go unnoticed.  Not only the man and the spectators saw but also Jesus’ disciples.

It worth noticing that Mark places this before and after Jesus clear prophecy of His betrayal, suffering, death, and resurrection.  The Lord has come exactly for this and His suffering and death upon the cross is the place where the devil and the evil that has all creation under its veil will meet their match.  We think of this whole story more of a curiosity than anything else.  We live an enlightened world in which the devil and evil are not real.  Oh, to be sure, there are injustices and illnesses and bad people but we have explanations for them and solutions.  We lived through some of them last year in a pandemic, in protests over past prejudices, and in elections that are supposed to raise up leaders with answers.  We do not live in a world of demons and devils.  Or, do we, post 9-11?

Luther believed in the old evil foe.  He sang about him in A Mighty Fortress. Do we believe it?  That evil is real.  The devil is real.  Demons are real.  They afflict the sons of Adam and Eve still.  Whether in the obvious or hidden behind our scientific world of cause and effect, the devil still works among us to render us mute, to steal away the voice of faith, and to harden our hearts against the mercy and power of God to save us.  He owns the hearts of the terrorist and violent.
The devil plies us with the lies we love to hear, the falsehoods that inflate our self-esteem and make us think we are too sophisticated to be take in by superstition.

Moms and dads still act in desperation for their children who have forsaken the faith, given up the values of the kingdom, and live as children of darkness and not of the light.  Children are still wounded by wrongs and held captive by death.  But just as we still live with the reality of evil and the works of the devil, Jesus still lives to impart to us the power of His redeeming work.  He has come to expose the demons, to confront them with His power, to answer their threat with the safety of His presence, and to deliver us from the tempting power of their lies.

With the confession must also come the prayer.  “Lord, help my unbelief.”  None of us are finished creations.  Every Sunday we hear, “May He who began this good work in you bring it to completion on the day of our Lord Jesus Christ.”  But just as God is at work in us by baptism and faith bringing to fruit all that the Holy Spirit began in us by baptism and faith, so the devil is at work against us, working to undo that which the Lord began.  We dare not think so highly of ourselves for if we do, we shall not stand.  We shall fall.  We shall become the victims of the devil’s lies and surrender our faith at the altar of our pride.  That is why we come here, back here, week, after week, after week, after week.

In your baptism a war began within you.  You were raised up from that baptismal water a new person at odds with the old one who went down into that water.  The old Adam is a good swimmer.  The old nature is like ruts in the road that beckon us back to the ways of unbelief and sin.  The world now notices us not simply as people but as enemies – because we belong to Christ.  Yes, you fear, love, and trust in Christ but this faith is at odds the sin’s instinct, with the temptation of the world, and with the powers of the devil.  A war rages inside of you and you cannot win unless you remain in Christ through the means of grace.

The old habits, addictions, idolatries, and lusts haunt us and tempt us and these are the tools through which the devil works to mute our faith.  But Christ calls you His own and calls you out of the darkness and into His light.  He holds you and calls you to hold to Him.  Daily we live out this new and foreign life as a baptized child of God under the cross.  Daily we confess what we believe and daily we confess the unbelief the still lives in us.  That is how the devil grows weak and we grow strong.

“Why could we not cast it out?” the disciples cried.  They had seen the Word of the Lord as a formula to be used to achieve the results they desired.  But the Word of God is not some magical spell.  It is the Word to be believed, to be prayed, to be lived.  You do not live in Christ by going to church but you certainly cannot live in Christ without going to church.  It is not where we go but who is here and what Christ does here that instills faith and nourishes it.  So that we may grow ever stronger in the face of challenge and grow up in righteousness and holiness we come here where faith is confessed and unbelief is likewise confessed, where we abide in Christ and Christ abides in us.

Jesus does not call us to an idea but to a life in Him and before Him, through the means of grace, praying and guarding the faith in us.  That is how the devil is kept at bay, doubts overcome, fears subside, sins released, and lives raised to life everlasting.  Do not be deceived.  The battle is great but the Lord is on your side.  His power will prevail.  So abide in Him and He will abide in you and YOU will prevail.  Amen.