A sad story... though not surprising 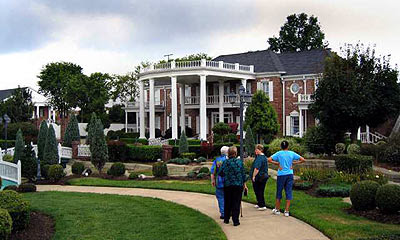 Some years ago we watched as Twitty City (a monument to Conway Twitty and a tourist destination for die hard CW music fans) became a Trinity Broadcast Network campus(Trinity Music City USA) and home to the flamboyant if not odd husband and wife Jan and Paul Crouch.  BTW it may interest you to know that Paul Crouch tells the story of the Lutheran who gave him a million or so when his empire was just beginning and allowing him to buy his first real TV station... so sad...

Well, anyone who has watched should have known that this was a disaster in the making and that Jan and Paul might not be fully transparent in the morals and money departments.  The whole nature of this enterprise is suspect -- if only because it lacks any real accountability or honest oversight to the excesses that seem to be endemic to such "ministries."  And now we know it was "too good to be true" (not exactly how I would put it).

The world's largest Christian TV channel, the California-based Trinity Broadcasting Network, has become embroiled in a multimillion-dollar financial scandal after members of the family that founded it alleged widespread embezzlement.

The claims – by Brittany Koper, whose grandfather Paul Crouch founded TBN, and by Joseph McVeigh, another family member – describe exorbitant spending on mansions in California, Tennessee and Florida, private jets and even a $100,000 (£63,000) mobile home to house the dogs of Crouch's flamboyant wife, Janice.

The network, which claims to broadcast in every continent except the Antarctic and has 18,000 affiliates, was set up by Crouch in the 1970s and preaches a "prosperity gospel" which promises material rewards to those who give generously.

Two years ago it declared a net worth of more than $800m, although in recent years it has faced increasing financial problems. Details of the claims are contained in cases filed with the California courts by McVeigh, who says he was targeted by the network, and 26-year-old Koper, who was fired in September.

According to the lawsuit, reported in US newspapers, Paul Crouch Sr obtained a $50m luxury jet for his personal use through a "sham loan", while church funds – many of which come from donations during events like its "Praise-a-thons" – paid for the dogs' mobile home.

TV has not been necessarily helpful to the Christian cause and a couple of more scandals do not make it easier for those who may legitimately use this technology for the honest work of the Kingdom.  That said, I still cannot figure out why folks out there would trade an authentic Christian congregation, Pastor, and mission work for these glitzy and kooky fakes -- like TBN.  They would get nowhere unless folks were there sending in the cash.  I wonder how many Lutherans have sent in money (while at the same time stiffing their local parishes!).
Posted by Pastor Peters at 6:00 AM

Paul Crouch is supported by the
big money of wealthy widows who are
in their 80's and 90's. They are
usually home-bound and sit in front
of their TV sets to be entertained
by TBN. Crouch is probably the
biggest scam artist in religious
circles today. Since he started in
1973, his lavish and sinful lifestyle
has been under continual scrutiny and
investigation.

What is sad is that folks haven't learned from watching the Bakker and Schuller empires come crashing down around them.

Stay tuned to Old Slick down in Southern Texas. His empire will follow.