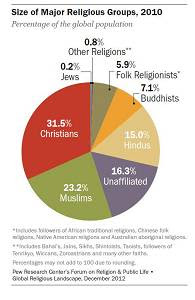 I merely pass on the summary report from the Baptist Press... it is an eye opening picture of Christians - not at all clustered in any one part of the globe, age group, etc...  In other words, Christians are more uniformly represented across the world than any other faith.  It is a testament to the Word and promise of God -- something which we do not always acknowledge.

From the Baptist Press:

NASHVILLE (BP) -- Christians are the world's largest religious group and are nearly evenly dispersed globally, according to a new Pew study on the size, geographic distribution and median ages of the world's major religious groups.

Of the world's 6.9 billion people, 2.2 billion or 32 percent are Christians, Pew reported Dec. 18. While only 12 percent of Christians live in North America, the vast majority of Christians, 99 percent, live outside the Middle East-North Africa region where Christianity began.

Apart from North America, Christians are geographically dispersed, with 26 percent in Europe, 24 percent in Latin America and the Caribbean, 24 percent in sub-Saharan Africa and 13 percent in the Asia-Pacific region, the study by the Pew Forum on Religion and Public Life found, based on 2010 data.

Researchers did not study the degree to which people actively practice their faiths, but relied on the subjects' self-identification of their religious affiliation.

A plurality of the world's 14 million Jewish people, 44 percent, live in North America, while 41 percent live in the Middle East and North Africa, nearly all of them in Israel, the study found.

The Global Religious Landscape: A Report on the Size and Distribution of the World's Major Religious Groups as of 2010 encompasses more than 230 countries and territories. Based on more than 2,500 censuses, surveys and population registers, the research is part of the Pew-Templeton Global Religious Futures Project, analyzing religious change and its impact on societies around the world.

Researchers categorized Christian Scientists, Mormons and Jehovah's Witnesses as "viewing themselves as Christian," and computed them as comprising about 1 percent of the global Christian population.

The study found that some religions have much younger populations, determined in part by the growth rate of countries where the religions are largely found. For example, religions concentrated in China tend to be older, because the population growth is slower.

The full report is available here.
Posted by Pastor Peters at 6:00 AM