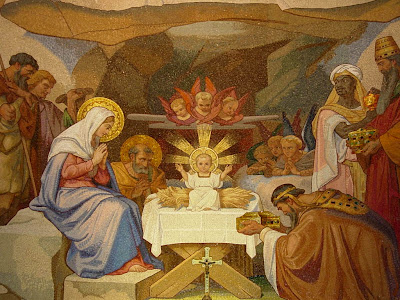 “We are perishing for want of wonder, not for want of wonders.”   ― G.K. Chesterton
Christmas is now past.  Judging by the pile of Christmas trees for recycling at the local park, decorations were ditched quickly and early.  We put them up early and then we grow tired of them.  Sadly, when we put them away, we also pack up our sense of wonder and delight in the works of God all around us.  One of the last lingering realities of Christmas in our secular culture is the surprise of children who open their gifts with unabated expectation and then delight as much in the paper, ribbons, and box as they do the carefully purchased toy inside.  As adults we have long ago lost our sense of wonder so we must live vicariously through the surprise and awe of our children.  Sadly, the age of those surprised seems to decline each year as youth gains its sense of cynicism earlier and earlier in life.

Today we remember the Magi whose sense of wonder led them to leave behind the familiar and seek after the treasure at the end of the light that shown in the night sky.  They were driven not by a fully informed faith but they did not lack for surprise and awe.  Something was happening.  They could not sit around idle in their lives without exploring this new thing God was doing.  I am not at all convinced they had an idea who or what would be there at the end of their journey but they went and knelt and worshiped and laid their gifts at the manger of a child who is the King and Son whom God appointed for His people... and for them.

Even babies are not the subjects of wonder like they once were.  Fewer and fewer parents can wait for the day to find out if the child is a boy or a girl.  Reproductive technology has downsized the mystery and turned it into a mechanical process with a predictable outcome (so we feel cheated by our technology when it fails to deliver what is promised).  We cannot wait for our children to grow up and so we foist upon them adult clothing, we insist they act like adults, and we leave them more to their own devices with fairly adult choices (their use social media and the internet being but one example).

Epiphany is about wonder.  The wonder of a star that shines with more than light.  Of a baby that is found at the end of a journey but approached as more than just another infant.  Of gifts and treasures that honor the child as God and prefigure the life He was born to live.  Of a season of epiphanies in which miracles small and mundane as well as large and extraordinary reveal that He is whom the prophets have promised.  Of a baptism that gives more than it takes and the dove and voice that mark it as pivotal.  Of water become wine so that guests may merely drink more freely.  Of apostles called to unknown ventures.  It is a season of wonder and yet we seem so incapable of sensing wonder that we shrug our shoulders at the grand and minute ways in which God reveals Himself to us -- including the water that holds life in baptism and the bread and wine that gives His flesh as our real food and His blood as our real drink.

God's wonders are all around us and on Sunday morning they are front and center on display for our adoration and for our koinonia (participation)...  We do not lack the wonders... we surely do lack wonder.  When Jesus says we must become like little children, could He have this in mind as one aspect of a child-like faith?  I think so.

Once I asked an elderly woman who was near death what was the best moment of her life.  She skipped the usual answers to remember a quiet night, surrounded by family, gathered for a meal, in which nothing special happened... or did it?  It was a wonder to her because it was, as it were, a dream life -- not perfect but still wonder-full.  The conversation has haunted me.  I might be tempted to name a thousand memories that a world might understand as a great moment in life and miss the wonder that is hidden in the ordinary.  That is what Epiphany is about.  The wonder that God has hidden.... at the end of a journey, under the light of a star, in the flesh and blood of a child...

1. What Child is this who, laid to rest
On Mary's lap is sleeping?
Whom Angels greet with anthems sweet,
While shepherds watch are keeping?
This, this is Christ the King,
Whom shepherds guard and Angels sing;
Haste, haste, to bring Him laud,
The Babe, the Son of Mary.
2. Why lies He in such mean estate,
Where ox and ass are feeding?
Good Christians, fear, for sinners here
The silent Word is pleading.
Nails, spear shall pierce Him through,
The cross be borne for me, for you.
Hail, hail the Word made flesh,
The Babe, the Son of Mary.
3. So bring Him incense, gold and myrrh,
Come peasant, king to own Him;
The King of kings salvation brings,
Let loving hearts enthrone Him.
Raise, raise a song on high,
The virgin sings her lullaby.
Joy, joy for Christ is born,
The Babe, the Son of Mary.
Posted by Pastor Peters at 6:00 AM