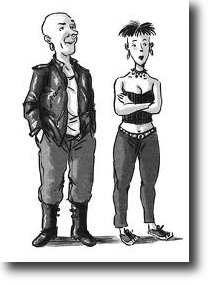 Lutherans tend to be rather antinomian when it comes to what you do to prepare for the Divine Service, what you wear to church, fasting, or the form of the Divine Service.  We don't like rules.  We especially don't like rules about external things.  So it jumped out at me when I read a comment on another blog in which an earnest Roman Catholic tied the preparations of the mind and body together.  What you do to prepare the body, also prepares the mind (and, can we add, the soul?).

The story chronicled the thoughts of a woman who was in a rush to dress for Mass when she came across a special outfit and then dismissed it in her mind, thinking "I'll save it for a special event."  The thought bothered her all the way to church and through the service until the next week she pulled out the "special" outfit and put it on to go to Mass.  This began an odyssey of transformation in which clothing was not merely tossed on in an effort to get out the door and get to the church on time but a reflection of an attitude that worship was a very special, even profound, event that deserved better dress.  The result of this was that she found herself also preparing her mind and heart for church in a way she had not done before.  It was an epiphany of sorts.  Casual dress and a casual attitude toward what took place in the Mass were parallels that, if they did not beget the other, fed the other.  The outcome of such casualness was that the Mass itself became, in the mind and heart, a less formal and more casual thing.  It was easy to criticize and nitpick and harder to concentrate upon or pay attention to...

I have long said that the problem with casual dress at church is not the clothing itself (except for tee shirts that advertize beer or skimpy clothing that does not cover enough up).  It is not the clothing but the attitude.  We diminish the Divine Service and its precious gifts of grace with a casual attitude that fits a recreational activity but not the presence of God in the means of grace.

It is not the clothing that is the major issue -- it is the idea that nothing special is happening in church so I can dress down for the occasion.  Lutherans, with their antinomianism toward standards of dress, piety, and ritual, are more susceptible than we think to the kind of casual attitude of mind and heart that accompanies our rumpled duds,  Clothing is not the fix but the tie between the two is unmistakable.  Clothing is not the solution but it can be part of the problem.  Fixing the clothing can be good outward discipline that will help us come with the right attitude of the heart and mind.

Who knows -- maybe we will find that fasting and prayer, review of the lessons for the day, and even the singing of a hymn or two may also be good for preparing the heart and mind... just like pulling out the good clothing we wear to special events can do.  I grew up with a clear idea of what church clothes meant.  I loved it as a child all decked out in a mini version of my father's suit, tie, overcoat, and fedora.  I rebelled against it as a teenager who did not think it cool.  But it did not take long for me to come back to the wisdom of it all.  Just in time to find that the world around me was beginning to think casual was good and formal was bad.  Heck, I guess I am always a day late and a dollar short and a brain cell down from full.  But it did my heart good to read this young mother and the transformation of her attitude toward the Mass and how her clothing choice for the Mass affected it all...  Maybe there is something there for us antinominan Lutherans, too!
Posted by Pastor Peters at 6:00 AM

You can say that again!!! It seems some people (particularly those who drive late model SUVs with trailer hitches for their boats, and clearly have financial means) come to church wearing whatever they tossed on the floor the night before, or something that hadn't been ironed (and looked it). I suspect they dress a lot nicer at their jobs. The only men wearing suits in church today seem to be those over 65.

Our usher team encourages its members to wear suits and ties; for some of our new ushers who are still in high school, it is their first suit! (I wonder if kids today would know how to use cufflinks.)

From photographs during the 1930s-40s, even male spectators at a baseball stadium wore suits and ties.