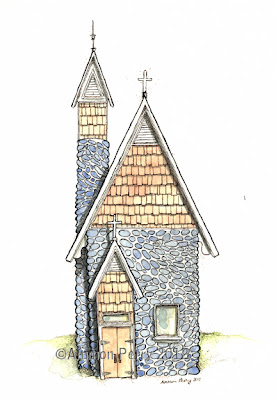 It was one of those awkward conversations.  A man and woman had met and married and things seemed to go sour from the earliest moments.  The two were more than just in compatible.  They seemed to be at odds over everything.  But they were not flip or they would have ditched the marriage a long time ago.  They worked until the working left them only more bitter and at odds.  Finally, with deep regret over their failure, they agreed to part.  The wife I had known.  The husband was new to me and to the parish.

He had not been a "church goer" (to use his own phrase).  What he meant was he had not been raised in the faith, although at some point in his young childhood had been baptized.  Church was strange to him and not at all a comfortable place -- at least in the beginning.  He went because his wife went.  He attended because it was important to her and he was sought to minimize the friction between them.  He came and came.  After they split, she moved.  This had not been her longtime home and there was little to keep her and lots to encourage her to move.  But he kept coming.

In the awkward conversation I spoke to him of the marriage, of the sense of loss, and of the failure.  "At least she left me with something," he said.  I was confused.  Was he speaking of some material gain or was this the entrance into some sarcasm?  "In the beginning I came to church because she did."  He went on, "I cannot be too sad... she left me her church.  Now I come for me..."

Over 33 years of parish ministry and I can tell you this is but one of many stories of that which endured when other things did.  His was not the only story of a marriage that failed but of a faith that was born within the pain and loss.  He was not the only one to have lost a spouse but gained a church home.

Some weeks ago I read another blog talking about the great temptation to disdain those who come to church for the wrong reasons -- for spouse or children or to find a spouse among them.  It is our great temptation to look down our noses at such folks.  They are not, as we might put it, the "true" believers.  But it seems that God is more careless and reckless than we are.  He does not spend so much time on the reasons why the folks come.  He meets them where they are and delivers to them the Word that plants the Spirit within them so that they might come for all the right reasons.  Sometimes we see and hear the experience first hand.

Christmas is behind us and, if your parish is like mine, it was full of strangers who came for all the wrong reasons -- spouse, lack of spouse, tradition, etc...  Yet the miracle of God's grace is that though they come for all the wrong reasons, the Lord meets them with His Word -- the same one that does not return to Him empty handed but accomplishes His purpose for its sending.

There is not much glory in marriages that fail, in the broken hearts and lives of two that were one and now are two again.  There is not much good that comes from two people who come to the same terrible conclusion that their life together is destroying each other.  But in this case, the surprise of grace showed up where we least expected it.  A man without a faith or a church ended up with both.

Often Pastors can sound downright bitter about the folks who should be in church but can't seem to get themselves there and those who get themselves there but for all the wrong reasons.  It is as if keeping score mattered most of all -- who and why and how many being the chief measures of success.  Thanks be to God that He is not like me.  He finds opportunity where I have judged the soil infertile.  Maybe I will remember this post before Christmas comes next year instead of after it is over!
Posted by Pastor Peters at 6:00 AM

This is a great piece. My priest has made similar comments about people coming to the Church. One such "tag-a-long" by marriage from our parish is now in seminary! And not just about coming to the Church but about all kinds of things we do and all kinds of inappropriate motives we may have (for example, doing good works for of fear of damnation rather than for love of God) and yet God can and does work good from them. I love His surprises...I have something similar going on in my immediate sphere and I never could have expected what is happening! All Glory to God!

This is beautiful!
I now hope the people in the church do not look down on this man or make him feel like he is invisible because he is divorced.
(this does happen).
I pray they accept him with open arms.