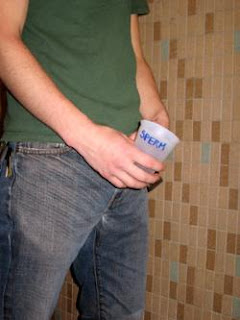 Talk about safe sex.  A man alone in a room with a cup.  Hmmm.  Who could be hurt?  What consequence could it all have for him or for anyone?  Well, apparently grave consequence...

Topekan William Marotta sought only to become a sperm donor — but now the state of Kansas is trying to have him declared a father.

Nearly four years ago, Marotta donated sperm in a plastic cup to a lesbian couple after responding to an ad they had placed on Craigslist.

Marotta and the women, Topekans Angela Bauer and Jennifer Schreiner, signed an agreement holding him harmless for support of the child, a daughter Schreiner bore after being artificially inseminated.
But the Kansas Department for Children and Families is now trying to have Marotta declared the 3-year-old girl’s father and forced to pay child support. The case is scheduled for a Jan. 8 hearing in Shawnee County District Court.

You can read the story here.  My point is not to dwell on the detail but just how much we crave an escape from consequence and responsibility.  By all accounts this was a selfless act (as far as sperm donation goes).  He got no money for it and he had the approval of his wife.  He was helping out a lesbian couple who wanted to be mommy and mommy.  But life is not so simple.  Actions are not without consequence.  Responsibility cannot be written off with a signature on paper.

The state acts in the interest of the state.  It seeks a father and a mother, a stable home, for children.  Absent this ideal, it seeks financial address to help make something as close as this possible.  You may not like it here but we cheer the actions of states who seek out dead beat dads to cough up child support and stand up to their duty.

On Oct. 3, attorney Mark McMillan filed a petition on behalf of the Department of Children and Families seeking a ruling that Marotta is the father of Schreiner’s child and owes a duty to support her. It said the department provided cash assistance totaling $189 for the girl for July through September 2012 and had paid medical expenses totaling $5,884.96.

I wish these people no harm.  I merely point out that we have a false sense of comfort in the mess that is reproductive technology and the in the vague and ambiguous definitions of family that we pass off  because of political correctness.  I publish this as a wake up call.  Sperm donors may not be insulated from every responsibility simply because they thought they were acting anonymously and within the pale of presumed morality and legality.  Couples, gay or straight, who seek out methods of conceiving a child outside of the boundaries of husband and wife are entering the messy and muddy waters of morality and legality that is neither certain nor set.  Nothing tests this more than a bill that needs to be paid.  And that is what has brought this whole story into the news.  Who is going to pay?  I would posit that we all pay for the mess we have made of marriage, family, and parenting.
Posted by Pastor Peters at 6:00 AM

Marotta entered into this 'adventure' not understanding one crucial fact: Even if the lesbian couple entered into an agreement to hold him harmless, they could not act on behalf of the State of Kansas. Neither did he consider any of the scenarios in which the situation could go seriously 'pear-shaped', e.g. the couple breaking up, or one or both partners dying, or (as it appears here) financial hardship for the couple and illness of the child.

Even if he is to be tagged with the bill for the child's expenses, he will need to fight an additional legal battle were he to decide he wishes to play any sort of parental role in his daughter's life.

Welcome to our brave new world.

BTW, expect to have no small amount of abuse directed at you for raising these uncomfortable questions, and insisting that the traditions of Christendom (monogamous marriage between man and woman, children born and raised under the shelter of marriage, etc.) actually do work to the benefit of all.