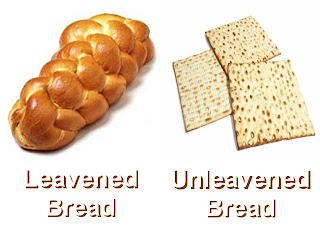 I had someone talk to me about using a loaf of bread instead of the usual mass hosts (commonly called and distastefully referred to as wafers).  It had been done regularly in a previous parish where they resided and they thought it was a very "neat" practice.

I have mixed feelings about this.  Perhaps the biggest issue I have are the crumbs that fall all over the place and make reverent care nearly impossible.  I have never found a way to neatly break off somewhat uniform bits without spewing the crumbs all over the place.  Once, where I was a communicant and they used this practice, a woman in a black dress and several fellows in dark suits carried on their clothing the blessed crumbs of the body of Christ back to the pew with them.

Second is the whole idea that a loaf bears remote resemblance to the bread forms with which Jesus had been accustomed.  It would seem that loaf is a more modern invention and that, perhaps, "cake" forms were more attune to the actual leavened breads of two millenia ago.  This is attested to by the Anchor Bible Dictionary:

On Maundy Thursday it has been the practice here to use a more rustic form of unleavened bread, shaped in a flat cake, moist enough not to crumb, but I would hate to have to use this all the time.  It is hard to portion out or plan for the number of communicants with such six inch diameter flats of bread and it certainly makes reservation more problematic!

The other issue is the idea that it is "neat" or "cool".  The sacramental bread is many things but neat and cool are not adjectives I would normally apply to it.  The whole idea of doing something because it was trendy radiates against the very nature of the sacrament itself.  We do not play around with the elements.  These are the means of grace.  We treat them carefully.  This includes the kind of bread as well as the Words by which this bread is set apart.  And it certainly implies that we will distribute this with care and with reverence.

It seems that we are never quite satisfied with what God gives us -- we take His gifts and toy with them to make them more relevant, more fun, or more to our liking.  But the essence here is the promise attached to elements.  The issue is not what the elements are not, but what they are and what they are is answered by His Word and promise.  The Divine Service is not the dramatic re-enactment of the Upper Room.  The point here is not to create and authentic recreation of that moment.  The point is to set apart bread and wine according to the Word and promise of our Lord so that He can be with us always, even to the end of the age, and impart to us what He won by His death and resurrection.  As soon as we turn from this, other things more trivial become the focus (how it looks, how it tastes, and how it feels).  The benefit of the supper is not in the experience but in eating and drinking with faith in the promise given to this eating and drinking.
Posted by Pastor Peters at 6:00 AM

This post is so relevant to what happened in our church yesterday during communion. We have been attending a LCMS for several months and are ready to take the classes to join. Yesterday during Communion a wafer was dropped on the floor. I saw this and saw our pastor pick it up, consume it himself and make the sign of the cross. To me this was so respectful of the sacrament and later I called our pastor to ask more about it. He explained not only that incident but what happens to the extra elements after Communion is over. I am full of awe for God and what he has given us after this.

The bread is not the host until after it is consecrated.

Also, the pastor distributes the host (singular) and NOT the hosts (plural). There is but one Paschal Victim, our Lord and Savior, Jesus Christ.

We used a loaf of bread at my former church, the crumbs from the bread were always on the floor. In my view this is not the way to go.

We use Leavened Bread for the Eucharist in the Orthodox Church but we have to take exceedingly great care not to leave crumbs anywhere. It can be done, but I admit, it is hard work. Hosts are easier to use and eliminate the crumb problem. Since they have been the established Western usage for nearly 2,000 I would keep them if I were Lutheran, if for nothing else than to emphasize Lutheranism's continuity with the Western Church.
Brother Boris