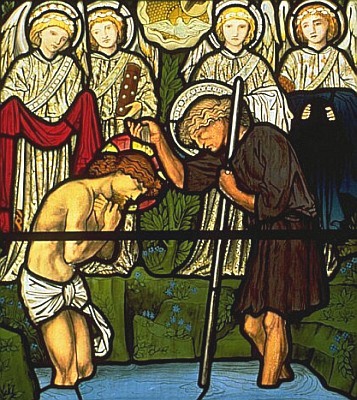 Sermon for the Baptism of Our Lord A, preached on Sunday, January 8, 2017.

Epiphany is filled with questions – why would Persian astrologers pack up and follow a star to a Jewish King?  What exactly was that star?  Why did it lead to Jerusalem and Herod instead of directly to Bethlehem?  Why didn’t the priests and scribes of the Temple hop the first bus to Bethlehem to meet the Messiah?  Why would God allow the rage of Herod and the death of the Holy Innocents of Bethlehem?  How did John recognize that Jesus was the Messiah?  Why was Jesus baptized in a baptism designed for sinners to confess their sins and repent of them?

Sooo many questions!  Only one answer.  Jesus Christ.  He is the answer to them all just as He is the answer for everyone – Jew, Greek, slave, free, male, and female.  There is salvation in Him and in no other.  What we do not understand is not the fault of the Scriptures but our weakness and yet we can trust that every question is answered in Jesus Christ, an answer we apprehend by faith.

The context of the star and its Light is significant.  The Roman conquest of the world provided a time ripe for the spreading of the Gospel.  There was the peace of Rome, the safety to travel, and order – all do to the Roman Empire.  The time was ripe for the fruit that is Christ our Lord.  The Law and the prophets all looked to this day and to this moment though only the Father knew the time.

Zechariah had been mute for nearly a year and then he spoke to name his son of promise “John.”  John was born as the messenger to prepare the way of the Lord.  From the kick in the womb of Elizabeth to John standing in the waters of the Jordan calling people to repentance, you would have to be blind and deaf not to know that something was up.  God was doing something, something new. The key was in the Scriptures and the new thing was Jesus Christ.

Herod was not simply a crazed and wicked man but he got it right.  God’s will was on a collision course with the status quo.  Nothing would ever be the same again.  The world was in the throws of radical change in the unfolding of the plan of salvation made before the world itself.  Earthly rulers and kingdoms were not the focus of this move but the infant Son of the Virgin Mary who was welcomed by shepherds and Magi and who would reveal Himself in word and deed as God’s Son enfleshed.

The meaning of that Light is even more radical.  The Gospel would come first to Israel but it would not be for Israel alone but for the whole world. The old barriers of clean and unclean would be bridged by the Savior who would make all who receive Him sons and daughters of Abraham - regardless of their nationality or birth.  The Magi were the first signal of the fulfillment of Israel’s forgotten prophecy.  The nations will come to this Light.

The child Jesus is the God whom we worship and no other.  The mountains of Sinai and Gerazim would be swallowed up in the little hill called Calvary.  The Temple stones would fall never to rebuilt but Christ would come from the grave in three days.  In many and various ways God spoke to His people of old through the prophets, but now He spoke fully and finally through His Son, incarnate of the Virgin to take our place under the Law, on the cross, and as the first of many to rise to everlasting life.

The Gospel comes not to a world that welcomes it but to a world set against it.  This Gospel will always have enemies and Christ will always have His skeptics and His detractors.  This is no political kingdom but one born of faith and it comes to sinners who stop hiding their sins and confess them, to a people who repent of their sin and wear the lament of its death right down into the baptismal water.  He is come not for judgement but for mercy -- a bruised reed He will not crush and a dimly burning wick He will not extinguish.

Yes, this Gospel will always have martyrs.  We grieve for the lost boys of Bethlehem who died in Herod’s rage but death did not end with them.  in 2016 nearly 100,000 Christians died as martyrs – people who refused to bow to the Baal of Mohammed or any other false god.  Even if it meant death!  And the blood of the martyrs remains the seed of the Church.

The answer is not a choice we make or a decision we render but the splash of baptismal water where we meet Him who came to be one with us except without sin and to die in our place upon the cross.  In baptism the holy and clean Lord entered the Jordan and came our stained with the dirt of our sins. And in the baptism with which we were baptized, we, the guilty, go down dirty but we rise up washed, cleansed, clean, and righteous in Christ.  We may not yet be who we shall be, but we are not who we were!  We do not look back with longing but forward with anticipation.

Baptism is the font that makes new the old, gives life to the dead, and bestows a future on a people with only a past.  In baptismal water was the womb of our new birth and in Christ we struggle to live out this new life.  A part of us longs for the old ways of sin that we struggle to leave behind.  A part of us longs for the new to be complete in us.  Such is the tension of those who are sinners and saints at the same time, in the moment awaiting the finish of what God began in us when we were first baptized into the Name of Jesus.

So many questions.  Only one answer:  Jesus Christ!  He leads pagan strangers to find a home in God’s presence.  Here in this church is the new stable where stinky shepherds and heathen astrologers and every one of us finds a home, a place, a new life by God’s mercy and grace.

This Christ is Israel’s rightful and eternal King but He has not come to restore the dull glory of an earthly kingdom.  No, He has come to give to a people captive to death life in an eternal kingdom where death no longer reigns.  He will sit on David’s throne not for a while but forever and in Him shall all the nations of the earth be drawn.

He fulfills all the prophet promise that kept hope alive when nothing else did.  He now keeps every prophecy and fulfills every promise made of old. As the prophets spoke, Jesus keeps and the Word of God is complete.  But it is not without enemies and not without opposition.  The world and even our own sinful hearts resist this new thing God was doing.  We have all been more comfortable in the evils we knew well than the good we meet in Christ.  But He refuses to write us off.  He bids and invites us still.  His Word speaks, the Spirit works, and the heart learns to believe in Him.

His Kingdom is come not for a moment ripe for change but for an eternity unfolding.  He does not see with the nearsighted vision of a people who live only in the moment but as the God of yesterday, today, and forever.  We meet Him not in our dreams or in our feelings or in a thin veneer of earthly righteousness to hide who we really are.  No we meet Him in baptism where we are forgiven and made clean by His Word planted in water.

Here is the welcome of God for strangers who do not belong.  Here is the mercy of God that forgives all sin.  Here is the righteousness for sinners to wear instead of the soiled rags of their own good works and piety.  Here is the Light that shines in the darkness and the darkness has not overcome it.  Here is hope for a people who long ago gave up hoping and here is the One who satisfies the hunger, the thirst, and the longing the world could not fill.

So many questions.  Christ is the answer.  To the nations who were once His enemies and to the children of Israel who thought they alone were His chosen, Christ comes and shines upon us the Light of His love, His grace, and His mercy.  So now I say to you as Paul said of old: walk not as people of darkness but as people of Light.  Live not as those who are anonymous but as the Christians marked with Christ and for Christ.  Live not as a people captive to fear but filled with hope.  Live not as a people who love sin but as the new people who love righteousness.  Christ came to bear your sin so that you, the baptized children of God, may now bear His light and like stars we shine with the brightness of His borrowed light.  In the name of Jesus.  Amen.
Posted by Pastor Peters at 9:02 AM

We must always center our lives around Jesus, and His word. This one thing we must all do. It is where we start, and it is where we end up. A relationship with Christ and the Baptism we received should set us apart as sinners saved by grace, and we must embrace this idea with our whole hearts and minds.