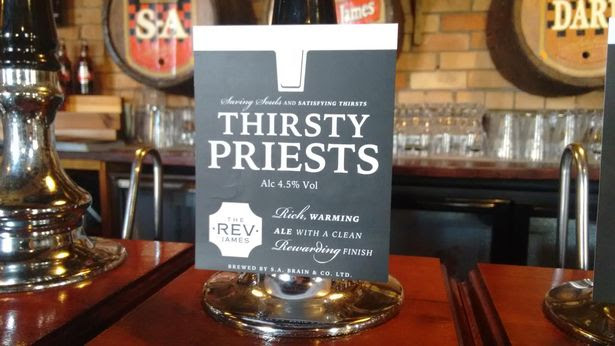 Some weeks ago there was a story of priests and seminarians who headed out to a pub in Wales but were denied entry because the bouncer thought they were rowdies doing mischief.  There was, after all, an ancient law against priests going out and about in cassocks.  Eventually they made their point and the the pub let them in with apologies from the management and applause from the patrons.  And we though that would be it, right?Well, there is more.  According to a news source:

After spotting one of the priests called Reverend James drinking a popular beer – The Rev James – the company who own the chain, Brains, are renaming the ale to “The Thirsty Priests”.

The beer, described as a “rich, warming ale with a clean, rewarding finish” will be on sale soon in the capital’s pub.  It also has a witty slogan, which reads “saving souls and satisfying thirsts”.  Tim Lewis, PR Manager for Brains, said: “We wanted to do something as a ‘thank you’ to the priests for taking the misunderstanding in such good spirits.

“We thought what could be better than renaming The Rev James, their favourite ale, in their honour.
“It had to be something that captured the light-hearted nature of the story and we think the ‘Thirsty Priests’ is perfect.

Somehow, I seriously doubt that any souls will be saved by this re-branding.

Father Peters is challenged to come up with a daily post on his blog.
Some days he strikes out and some days he gets a hit. Perhaps, as
he faces the twilight of his pastoral ministry, he might settle for 3 posts a week. Even George Will or Peggy Noonan do not write a column
every day of the week.
.

Instead of a misleading "Thirsty Priests," the title simply could be "Yet Another Article About Romanists."

Just because Fr Peters is a Lutheran pastor doesn't mean that he has to write every post about Lutherans and Lutheranism. Perhaps it would be OK if he writes about what interests him, even if it's not Lutheran.


My Pietist Lutheran friends and relatives would be both horrified (drinking alcohol!) and satisfied that it's not the "good Christians" but one of those "pagans" doing it (priests! Catholics!).

It's no wonder so many people have given up blogging. I don't read every word you write, Pastor, but I'm thankful that you still take the time to do it.