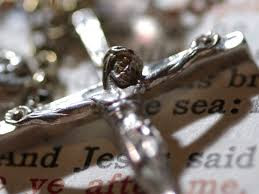 Lutherans are not exactly the kind of folks who are accustomed to talking about the devil or the demonic.  Most Lutherans would insist that exorcisms are not even Lutheran.  But I have been thinking even more about the demonic influence in our cancel culture, diversity programs, redefinitions of marriage and family, gender confusion, and such.  I am not off my rocker but taking more seriously than I have before the words of St. Paul about warring against principalities and powers, demons and devils, and spiritual forces aligned together against the Lord and His kingdom.

There was a time when exorcisms were not so uncommon.  In fact, I perform a dozen or more a year.  Shocked are you?  Well then you are not paying attention to baptisms.  We add back in something from Luther.  While Luther’s original revision of the baptismal order (1523) might seem a little foreign to Lutherans of today, it is a part of our tradition and identity -- including the several exorcisms and references to the work of the devil.

In Luther's rite, the priest began by blowing three times under the child’s eyes (an act called the “exsufflation”) and saying, “Depart thou unclean spirit and give room to the Holy Spirit” (LW 53:96; or check the “Alternate Form of Holy Baptism” found in the Lutheran Service Book Agenda, p. 13). The opening prayer implores the Lord to “break all the snares of the devil with which he is bound.”   After Luther’s Flood Prayer, a more extended exorcism of the child, concludes with the words, “I adjure thee, thou unclean spirit, by the name of the + Father and of the + Son and of the + Holy Ghost that thou come out and depart from this servant of God, (Name), for he commands thee, thou miserable one, he who walked upon the sea and stretched forth his hand to sinking Peter.”  Luther emphasizes the seriousness of the exorcisms, writing in the preface: “Remember, therefore, that it is no joke to take sides against the devil and not only to drive him away from the little child, but to burden the child with such a mighty and lifelong enemy. Remember too that it is very necessary to aid the poor child with all your heart and strong faith, earnestly to intercede for him that God, in accordance with this prayer, would not only free him from the power of the devil, but also strengthen him, so that he may nobly resist the devil in life and death.”

Sadly, the Rite of Baptism printed in the pew editions of Lutheran Service Book fail to include Luther's exorcisms -- making it odd to use them as opposed to the customary rite in which the reference to the devil is limited to the three renunciations -- of the devil, his works, and his ways.  We should have been smarter than to overlook the wise and pastoral need to include these in the baptismal rite.  Luther revised the medieval rite he knew but that rite preserved aspects of these exorcisms in continuous use since the fourth century (in one form or another).  Most Lutherans retained the exorcism from the 1526 rite although Southern Germans tended to omit it.  Strangely, the Reformed, including Zwingli, Bucer, and Calvin, all removed baptismal exorcism -- considering it a papal holdover.

In Luther’s world the devil was real and not simply a superstition retained from earlier days. Luther believed Christ and the Devil were equally real -- one the Redeemer who continues to plead His blood on behalf of sinners and the other who seeks to undo what Christ has done and wrest the sinner from the grasp of His grace.  Luther did not see his belief in the Devil as something to grow out of.  In fact, Luther saw this fight intensify and become personal as he fought for the renewal of the Church and the voice of the Gospel.  For Luther the monastery offered not refuge from the taunts of the devil and the only escape from the ever present threat of the devil was the Word of God.

At minimum every pastor ought to give serious consideration to the restoration of the baptismal exorcism.  If for no other reason that to remind the people of God that we all fall under the lordship of sin, evil, and demonic powers and  to warn us against being witting or unwitting partners in the devil's battle against Christ.  But merely restoring the exorcism is not enough.  Preaching that includes an honest awareness of evil and the forces of the devil reminds us that we are not waging war against flesh and blood, as St. Paul reminds. Restoring the exorcism and talking more openly about the battle waged against the devil reminds us that there are spiritual forces at work in our world.  All our education and erudition has not erased the devil from the world or turned aside his work to wrest the kingdom from us.  It is also helpful to include the baptismal exorcism so that the whole life of the catechumen might remember that they were under the devil and his power until Christ claimed them as His own and this awareness would help them in their work of growing in Christ through the means of grace.  This would not only remind them of the devil's power but drive them into the arms of Christ, into the armor of His Word, and into the need and benefit of being together with the faithful in the Lord's House.  It might even remind us of how beneficial and what a blessing private confession is!

We are not pretending here.  The devil is real.  He was banished from heaven and sent to the earth and Christ sacrificed Himself on the cross to overcome the devil's grasp on God's creation -- on you and me.   The Lord Jesus spoke openly and often about the “Prince of this world” (John 12:12; 14:30; 16:11).  To be faithful to Christ we need to consider His words and heed them.  We are not powerless and weak in the face of the devil or his taunts but the power is Christ's and we are only strong when we stand in Christ.  Perhaps it is about time for us to talk about this more openly and somberly as the world around us proves it is not God's domain but still under the thumb of the prince of darkness and lies.

"We are not powerless and weak in the face of the devil or his taunts but the power is Christ's and we are only strong when we stand in Christ."
Thank you, Pastor. for these powerful, comforting Words.
Timothy Carter, simple country Deacon. Kingsport, TN.