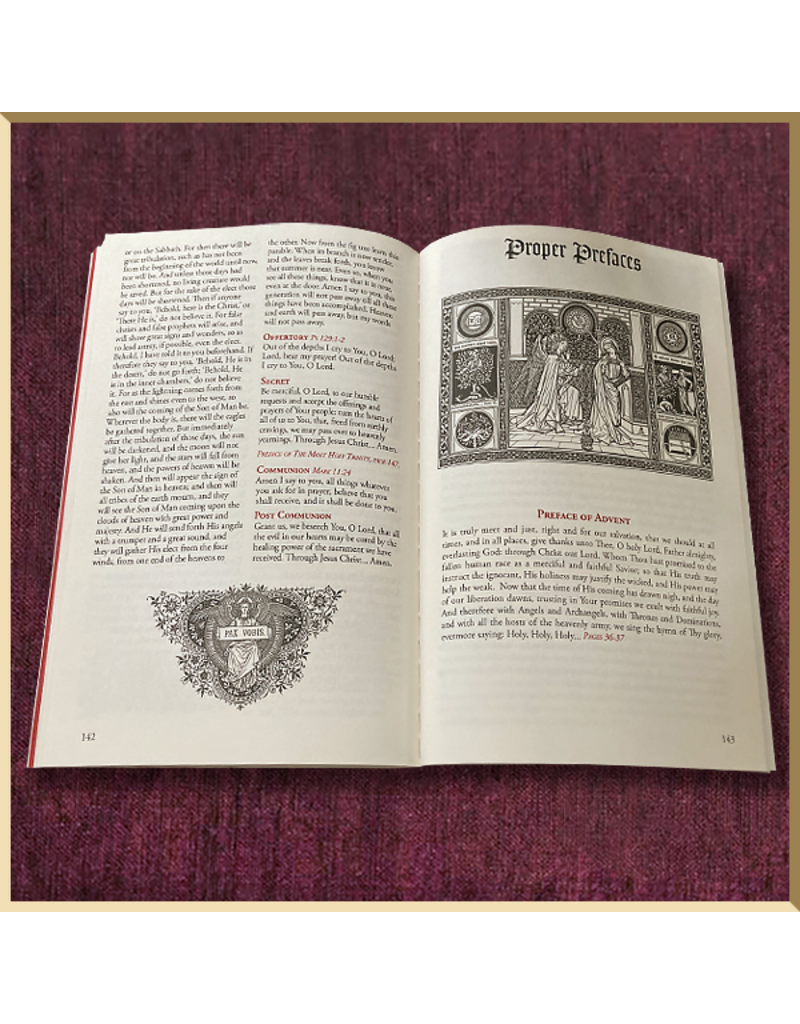 Let me begin by admitting that this post has no scholarly value and is simply my opinion.  So it does not matter if you have all the weight of liturgical scholarship on your side, this is simply what I think and I am probably too old to change my mind at this point.

It began with a question posed for a Roman Catholic blog on why the priest remained turned to the altar (ad orientem) even when the dialog of the preface was clearly focused upon the folks in the pews.  I was curious about this as well.  The answer he was given was:

I think the answer lies in the fact that the whole of the Preface, including the dialogue is considered an integral part of the Roman Canon (read: anaphora, actio, Eucharistic Prayer).  Once that mighty prayer begins, the priest remains properly oriented at the altar.   In ancient manuscripts for saying Mass, there was a notation just before the beginning of the short “dialogue” “Incipit canon actionis… the Canon of the sacrificial action begins”.  So the Preface that followed was perceived as part of the anaphora.

Let me put this in terms that libs will get in a possible new English translation that will be imposed once that last remnants of the JP2/B16 crew are finally extirpated.

The priest summons the community with a strong imperative statement: HEARTS UPWARD!  Sursum corda!  The people respond: OKAY, WE DID THAT (“We have them now presented to God… habemus ad Dominum.”  The priest commands: “LET US GIVE THANKS TO… YOU KNOW… THE THING!” and the people reply, “GREAT IDEA, WE’LL DO THAT TOO! (“It is right and just… dignum et iustum est.)”   And the priest picks up that phrase and runs with it into the Preface: “YEAH, IT’S A GREAT IDEA… vere dignum et iustum est“.  At the end of the Preface comes, seamlessly, the Sanctus… sorry…   santo  santo  santo .  When the maracas and tambourines die down, in the Roman Canon the priest continues with “THEREFORE… igitur…”.  The Canon is a seamless continuation of what has preceded.

It is “right and just”, therefore, for the priest to maintain his sacerdotal position at the altar for the entirety, not turning about this time to say, “Dominus vobiscum” at the introduction to the Canon.

I get the answer.  And the paragraph that begins with the imperative HEARTS UPWARD! is absolutely spot on.  I love it.  Hearts upward!  Let us give thanks!  Yes we will!  I only wish our people heard it that way and our pastors knew that this is what was happening.  But I still do not know why it has to be facing the altar -- especially for Dominus vobiscum.  I understand the practice but sometimes the practice is at odds with the logic of what is being done.  Those words are not directed to the Lord but to the people.  I would think that ad orientem would be easier to explain and to encourage by having the priest turn to the people for the words directed to them and to God for the words directed to Him.  I wonder if this is not one of those instances in which practice moved in a direction that contradicted the words.  I am not a history scholar and have no access to early missals to find out why but I cannot believe that this was the way it was in the beginning.  The point is that such contradiction between what the words say and where the priest is facing only invites departure from the rubrics and that is one thing nearly every liturgical communion struggles to prevent.

Lutherans have had no such question, at least in my experience.  Nearly every Lutheran pastor with an altar against the wall turns to the congregation for the Preface and turns back to the altar for the Proper Preface.  I will admit that those with an altar against the wall (ad orientem) frequently do a half turn for the Words of Institution so that the people can see what is going on.  This despite the rubrics telling him to remain facing the altar.  I will never for the life of me figure that one out.  If they are so desperate for people to see what is going on, pull the altar away from the wall and use it versus populum.  That is one of those strange liturgical innovations that nobody knows where it came from or why but it has persisted despite the rubrics.  I suppose there are many.  The rubrics tend to reflect our theology and to follow them is to practice consistent with that theology.

As far as it goes, I do not have so much a preference as I do a consistent practice.  The altar in my parish is free standing and the ordinary practice is versus populum but what I do is little changed from what it would be if it were ad orientem.  I do not acknowledge the people or look at them except for the Preface.  Everything else is directed where it should be -- to the altar and what the Lord is doing there -- just like their own attention should be.  I do have a small crucifix between me and the people so that I am facing that crucifix even though I am also facing the people.  I hope the day comes when I can find a double sided crucifix that is not too large so that we are both facing Christ for this part of the Divine Service but it is not so urgent.  The point is when we address the people, we ought to face them but when we address the Lord, whether the people are in our view or not, our attention is not on them.

You can get a Double Sided Standing Crucifix in Shiny Brass with a 3 Point Base, 13" (Made in Italy) from Hail Mary Gifts & Merchandise via Amazon for $262 + taxes & shipping.

Or you could just stand on the other side of your free-standing altar and turn around at the appropriate times.

What is the name of the blog?

What is the name of the blog where you saw this?

Based on studies done some years ago, I believe the orientation here is less theological and more vestigial. Normatively, altars were covered with a ciborium/canopy with curtains on all sides. These were drawn or lowered at various times. The sursum corda (and also pax domini) dialogues were when the curtains would have been lowered, hence turning Westward wouldn't really be of practical value.

The ciborium gave way to the reredos, the visibility of the host and chalice increased in importance, and eventually Trent got rid of roodscreens et al. that obstructed the altar, but the rubrics remained the same.

What is the name of the blog where you got this information?

would someone please tell me from what blog the good pastor got his information for this posting?

so, again, what is the name of the blog where you saw the information you gave on your posting?

For any Tiberwaders: "ASK FATHER: At Mass ‘ad orientem’ why doesn’t the priest turn around for the Preface dialogue?."