Lately I have been seeing more frequent commercials for those companies that clean up messes -- burst pipes, roof leaks, etc.  It seems that in the wake of Texas and a cold winter that there have been messes to clean up.  Not to mention the messes created by protests and riots.  Lots of messes!

There was a time when the job of the churches was to take care of the widowed and orphan, to care for the mentally ill, to run hospitals and sanitariums for the sick and chronically ill, to care for the aged who cannot care for themselves, and to bury the dead.  Things have changed.  Now government rules and laws have radically altered the playing field.  Most of these things are now done by other agencies and, it seems, by businesses.  After all, if the government is paying the bill, there must be a profit to be made.  So nursing homes, child welfare agencies, psychiatric hospitals, medical centers, nursing homes, assisted living facilities, funeral homes, and cemeteries are now for profit vehicles to provide a service and make a profit on the side.

But the idea still exists among those who were Christians or who never were that the only good church is one that cleans up societies messes.  If they don't, they ought to be taxed.  Where did they get this idea?  Could it be from Christians who presumed that it was not enough to bring eternal good to the wounded soul and that in order to justify their existence, the churches must make a difference for those who need help?  An eternal difference seems not to matter much in the face of a world filled with messes and few real solutions and eyes that look on churches as cash cows who play upon the fears and weaknesses of the simple and the frail.  At least that is the perception. 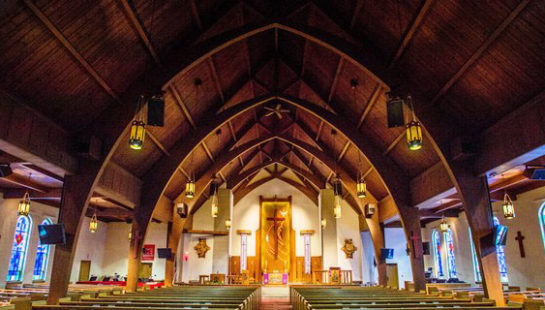 The point is this.  To those who do not know the comfort and joy of sins forgiven, of lives reborn in
baptismal water, of the direction of the Word to light their way, and of the food for body and soul in the blessed Sacrament of the Altar, there is no justification for the Church.  Except to clean up their messes.  Sadly, sometimes the people in the pews and the pastors in the pulpits presume that this is our job as well.  If we are not making things better in our community, then what good is eternal salvation (say some folks in the pews)?  If I cannot help make a difference to a person in need, then what good is preaching the Gospel (say some pastors about the ministerial offices they hold)?  Apparently we are not reading the Scriptures.  We have fallen into the trap that says the eternal only matters of the temporal is made better in the process.  Square that with Jesus' prediction of persecution, suffering, and even death for the sake of Him and His Gospel?

Let me say this.  Loving your neighbor is not the job of the Church as an institution but the vocation of the baptized in that Church.  Doing justice and showing mercy are not the job of the Church but the vocation of God's people as they live out the kingdom in and before the world.  Jesus does not speak much about institutional roles but He has much to say about the role of the Christian in society.  Could it be that we love to blame the Church for not cleaning up our messes because it relieves us of any personal responsibility to hear and heed the command to love one another as I, the Lord, have loved you?   The Church is not Servpro.  The Church is not God's fixit company to clean up our messes and then disappear from our lives until we screw up again.

Posted by Pastor Peters at 3:30 AM